The title of this article is ambiguous. Further meanings are listed under Twilight (disambiguation) .

Twilight over the nautical horizon with a waxing moon; the earth shades the sky almost all around.

As dusk is called the smooth transition of lighting conditions at the beginning and end of the bright day in exchange for the night , due to the sun's position in the light scattering and the atmosphere created. The perceived light as dusk or twilight referred.

By definition, sunrise is the moment when the top of the sun's disk crosses the geocentric or true horizon . This means that dawn ends with the appearance of the uppermost edge of the solar disk over this horizon. Conversely, dusk begins with the disappearance of the top edge of the solar disk below this horizon. The period of time during which the solar disk appears or sinks therefore belongs to the day and not to twilight, even if the brightness of the sun is still increasing or already decreasing during this period.

In the course of twilight, phases can be differentiated and then differentiated how deep the sun is below the horizon . For this, the position of the sun below the horizon is specified as the depth angle of the center of the sun disk. According to the depth of twilight, a distinction is usually made between three twilight phases, each of which ends at a certain angle, i.e. in the evening 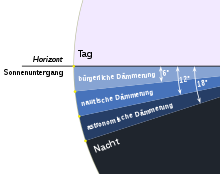 The duration of the three twilight phases depends on the inclination of the apparent path of the sun when rising or setting, and thus on the geographical latitude of the location and the time of year. The period of civil twilight is contained in that of nautical twilight, this in turn in that of astronomical twilight. Twilight lasts shortest near the earth's equator on the equinox and then ends 20 minutes after sunset in civil terms, 45 minutes in nautical terms and 70 minutes in astronomical terms. At the 50th parallel, the three twilight phases last around 2 hours, provided the astronomical end is reached at all, because in the short nights around the summer solstice , evening twilight turns into morning twilight ( midnight twilight or " white nights "). In regions of around 66 ° latitude, such as the Arctic Circle , the sun does not set on this date ( midnight sun ).

As a result of numerous terrestrial sources of illumination, in many places no completely black night sky can be experienced after the end of astronomical twilight; this brightening is also known as light pollution .

As a result of its atmosphere , the boundary between the light and the shadow side is blurred on Earth (taken at an altitude of around 390 km, from the ISS )

Physically, twilight means the time span in which scattered residual light from the sun, which is below the horizon, is visible from one location. It lasts as long as the day-night boundary, which has been widened towards the zone of twilight at night, extends across this location. There are twilight zones on all planets with an atmosphere. On the other hand, the Earth's moon or atmospheric planets like Mercury do not have twilight; the bright day is suddenly followed by the dark night.

The scattering of sunlight in high layers of the earth's atmosphere is the reason for the transition phase of twilight. This scattering occurs both in the air itself and in any particles ( aerosols ) that may be present . Since dawn and dusk are the same in their cause and only differ in their course, only dusk is considered here initially.

Above an observer for whom the sun has just set, the higher air layers are illuminated by the sun for a longer period of time. These layers of air scatter part of the penetrating sunlight in the direction of the observer, to whom they therefore appear more or less brightly shining. Most of the scattered light is only slightly deflected from its original direction, and the observer therefore sees the brightest (predominantly reddish) glow when he looks in the direction in which the sun is just below the horizon. Light that reaches the observer from other directions in the sky has been scattered at larger angles, which happens with less intensity and more blue content. Regions of the sky further away from the sun therefore appear increasingly darker.

The sunset lasts around 2 minutes near the equator, in Central Europe around 3–4 minutes from the first contact of the sun disk with the horizon to its complete disappearance. In astronomy, three phases are distinguished for the subsequent twilight. Assuming sunset, evening twilight runs as follows:

The point in time at which the respective twilight phase begins depends on the degree of longitude and thus on the true solar time . The earth needs around 24 hours for a rotation of 360 ° around its own axis, equivalent to around 4 minutes per degree of longitude and around 15 ° in one hour. For example, twilight sets in about 30 minutes earlier in Berlin than in Cologne , which is about 7 ° more west.

At the end of the night, when sunrise is approaching, the twilight phases run through in reverse order until sunrise.

The definitions of the twilight phases refer to the so-called geometric height of the sun below the horizon. The refraction and other influences on the observed sun position are therefore not taken into account. For the individual calculation of times at which the sun reaches certain heights, see position of the sun .

The duration of twilight initially depends on the latitude of the observation location. At the equator , the apparent path of the sun stands steeply on the horizon and dusk only lasts for a short time. Towards the poles , the path of the sun cuts the horizon at a flatter angle and twilight lasts longer. As the distance from the equator increases, the twilight phases can lengthen so much that an evening turns into a morning. In the northern zones of Europe, Asia, North America and the southern tip of South America, at certain times of the year, a twilight phase lasts without interruption and a lower phase is no longer reached.

Zones of twilight in Europe on June 21st

At a given latitude , the angle at which the sun sets also depends on the season, so that the duration of twilight varies slightly over the course of a year. The longest twilight times are reached at the two solstices . The shortest twilight times occur near the equinoxes.

Duration of twilight at different latitudes

Sun in the sky at dusk and sunrise (SR)

is the angle at the North Pole between the meridian of the observer and the current meridian of the sun for a certain twilight limit . (SR = sunrise) is the corresponding angle at sunrise, i.e. at a zenith distance of 90 °. From the moment the sun is just below the horizon until sunrise, the earth rotates by an angle of . The earth needs for the rotation around the angle

The angles and are calculated as follows:

With this formula the duration of the three twilight phases is calculated as a function of latitude and declination .

For large geographical latitudes and certain times of the year it may happen that some twilight phases are not reached. The formula for calculating the twilight duration does not provide a real value for these latitudes and declinations. 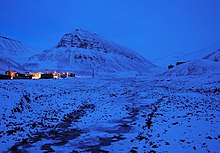 Twilight in Germany on June 21st

Optical phenomena at civil twilight depending on weather and observation conditions can be:

Optical phenomena at nautical twilight can be:

Wilhelm von Bezold described in detail the typical course of twilight in Central Europe in the 19th century and the variety of phenomena to be observed .

Sections of a sunny day