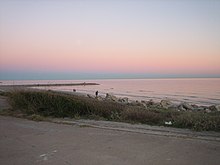 The lower the position of the sun below the horizon, the greater the shadow arc above the horizon.

Earth shadow arc recorded from an airplane at an altitude of about 11,000 m

The earth shadow arc , also called earth shadow in an imprecise way , is the projection of the shadow of the earth into the opposite twilight sky that is visible above the horizon after sunset and before sunrise in low-cloud weather conditions . The arc-shaped light-poor strip is highest in the opposite position to the sun and approaches the horizon to the north and south.

A distinction must be made between the earth's shadow arc and haze layers close to the horizon , which can show a similar appearance, but mostly run parallel to the horizon and, in contrast to the earth shadow arc, can also be seen before sunset or after sunrise.

When the sun sinks below the horizon in the course of civil twilight , the direct solar radiation no longer reaches the surface of the earth at an observer's location. On the opposite, eastern horizon, on which the so-called counter - twilight takes place, the rays of the sun no longer directly reach the lower layers of the atmosphere that can be seen from the location. Significantly less light is reflected from these than from the higher atmospheric layers, which can still be hit by direct light. This creates a light-poor, gray-blue strip directly above the horizon, the Earth's shadow arc.

The shadow cast by the earth lies in an arc shape opposite the sun and is set off from the orange-purple glowing appearance above, the counter-twilight arc or so-called Venus belt . As the sun sinks lower, the belt of Venus fades and the Earth's shadow arc rises higher. Later, the belt of Venus disappears completely and the earth's shadow merges into the deep blue sky at the zenith without any recognizable border. About half an hour after sunset, the Earth's shadow arc is no longer noticeable. At dawn, the processes take place in reverse order in the western sky.

The French meteorologist Jean Dubois proposed in 1951 that the blue-gray coloration of the shadow was caused by the Chappuis absorption in the ozone layer . This assumption, which seems plausible due to the coloring, is not tenable, because the spectrum of the Earth's shadow arc does not differ significantly from that of the Venus belt and also not from the higher layers of the opposite horizon - the Chappuis absorption can be recognized in all spectra in the same way, as between 2012 and measurements carried out in 2014 have shown.

The spectra of the Earth's shadow arc and those of the higher layers above the opposite horizon differ mainly in the intensity, but little in the spectral composition of the radiation. Thus it seems that the perceived bluish coloration of the Earth's shadow arc and its clear demarcation from the Venus belt above are obviously due to its significantly lower brightness in connection with peculiarities of human perception. At low luminance with a transition to twilight vision , the human eye hardly perceives the longer-wave portion of the spectrum in terms of color (see also Bezold-Brücke phenomenon and purple line ).

Various numerical models are used to gain a better understanding of the details of radiation transport during twilight . A model suitable for calculating the color of the counter-twilight must take into account multiple scattering , and a spherical image of the stratification of the atmosphere is necessary. Even with today's computing power, an analytical method remains a challenge; Monte Carlo simulations are mostly used. It is hoped that this will give more insight into the influence of the aerosol composition and the ozone layer .