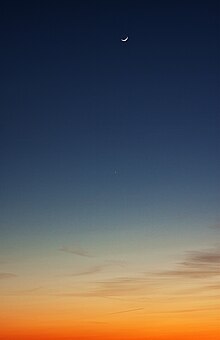 Western skies at dusk, at the blue hour . The deep blue color at the zenith is due to the Chappuis absorption.

It is named after the French chemist James Chappuis (1854–1934), who discovered this effect caused by ozone.

In 1880, James Chappuis was arguably the first of the researchers working on ozone to notice the blue coloration of light caused by this gas. He attributed this effect to the absorption in the yellow, orange and red spectrum. Since the French chemist Auguste Houzeau had previously established in 1858 that the air in the atmosphere contained traces of ozone, Chappuis suspected that the ozone could contribute to the blue color of the sky. However, he was aware that this could not be the only explanation, because the blue part of the light that can be seen on the earth's surface is polarized  - which cannot be explained by the absorption of the ozone, but by the Rayleigh, which was already known at the time. Scatter . And from the point of view of the scientists of the time, Rayleigh scattering was perfectly sufficient to explain the blue sky and the thought that ozone could also contribute something was forgotten.

In the early 1950s, Edward Hulburt examined the sky at dusk to verify his formulas, which were supposed to allow statements about the temperature and density of the upper atmosphere based on the scattered light measured on the earth's surface. The basic idea was that after the sun has disappeared below the horizon, it only illuminates the upper layers of the atmosphere and therefore the intensity of the light arriving at the earth's surface due to Rayleigh scattering can be used to determine the number of particles at the respective altitude leaves that can still be reached by the sun at a certain point in time. During his measurements taken in 1952 at Sacramento Peak in New Mexico , he found that the intensity of the measured light was less than the predicted value by a factor of 2 to 4. This prediction was based on his formulas and the data that had been measured a few years earlier not far from Sacramento Peak by rocket ascent in the upper atmosphere. The magnitude of the deviations between the forecast and the photometric measurements at Sacramento Peak excluded a measurement error . In addition, the theory predicted that the sky at the zenith should appear blue-greenish to gray during sunset and the color shifts to yellowish during dusk - which is obviously not compatible with the everyday observation that the blue of the sky at the zenith changes during the Twilight only changes inconspicuously. Since Hulburt knew the absorption effect of ozone and the spectral range of Chappuis absorption had been determined a few years earlier by the French couple Arlette and Étienne Vassy , he attempted to include this effect in his calculations. This enabled him to achieve complete agreement between the measurements and the theoretical predictions. Hulburt's results were confirmed many times in the following years, but this does not seem to explain all of the color effects during the course of twilight with a clear sky at low altitudes. For this it is probably necessary to include the spectral extinction due to aerosols in the simulation calculations.

Independently of Hulburt, a few years before him, the French meteorologist Jean Dubois had assumed the influence of Chappuis absorption in another color phenomenon of the twilight sky. When Dubois investigated the so-called “ Earth's shadow ” as part of his dissertation in the 1940s , he put forward the thesis that this effect was also due to Chappuis absorption. However, according to recent measurements, this assumption is not tenable.

The absorption spectrum of the Chappuis bands at the shorter-wave end is superimposed by partially irregular, diffuse vibration bands . The blurring of these bands suggests that the ozone molecule is only in an excited state for a very short time before it dissociates. This short-term excitation is mainly about symmetrical stretching vibrations , but there are also contributions from bending vibrations . A consistent theoretical interpretation of this vibrational structure that could be reconciled with the experimental data was an unsolved problem for a long time; Even today, not all details of Chappuis absorption can be theoretically explained.

As with absorption in the ultraviolet spectrum, the ozone breaks down into an O 2 molecule and a single O atom in the Chappuis absorption . In contrast to Hartley and Huggins absorption , none of the decay products remain in an excited state. The dissociation in the Chappuis band is the most important photochemical process of ozone in the earth's atmosphere below 30 km; above this, the absorption in the Hartley band predominates. But neither Hartley nor Chappuis absorption represent an efficient loss process for the ozone in the stratosphere, despite the sometimes high rate of photodissociation, since the elementary oxygen has a high probability of encountering an O 2 molecule and recombining with it to form ozone .