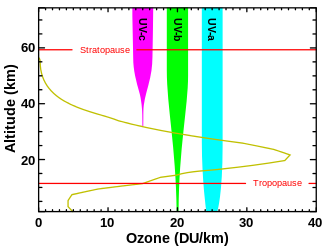 Dependence of the ozone concentration on the geographical latitude and altitude

The ozone layer is an area of ​​increased concentration of the trace gas ozone (O 3 ) in the earth's atmosphere , mainly in the lower stratosphere . It is created from the oxygen in the air, as its O 2 molecules are split into oxygen atoms by the most energetic part of sunlight ( UV-C ) . The atoms then immediately combine with another O 2 to form O 3 .

Ozone itself is much more sensitive to light than O 2 . It absorbs UV-C and UV-B and thus protects plants, organisms, animals and people from radiation damage. If an ozone molecule absorbs a UV photon , it is split, but in the vast majority of cases the released O atom immediately forms ozone again. Only the exceptions, mainly O + O 3 → 2 O 2 , mean a loss of ozone.

Ozone has a major influence on the temperature of the stratosphere, on the one hand through UV absorption, on the other hand, as an angled molecule, it is IR-active and thus radiates heat.

The French physicists Charles Fabry and Henri Buisson are considered to have discovered the ozone layer . In 1913 they detected ozone in higher layers of the atmosphere by means of UV spectroscopic measurements.

The effective lifespan of ozone is long enough that it is transported globally by the slow currents of the stratosphere: Although most of the ozone is created in the area of ​​the equator, the majority of ozone is in moderate and high latitudes, at altitudes between 15 and 25 Kilometers. The column height, measured in Dobsonian units (DU), is between 300 and 400 DU in moderate latitudes, and sometimes over 500 DU in higher latitudes in early summer, with 100 DU corresponding to a thickness of 1 mm. In the tropics, the ozone layer is raised by the upstream from the troposphere to a height of 20 to 30 km and thinned to 200 to 300 DU. The lowest column height in the world in the so-called ozone hole , which regularly opens up in the spring of Antarctica, is sometimes well below 200 DU.

Formation of ozone through photolysis of atmospheric oxygen

The photolysis of an oxygen molecule (O 2 ) at wavelengths below 240 nm produces two oxygen atoms, each of which binds to another oxygen molecule, so that two ozone molecules are created:

Ozone absorbs longer-wave UV light, up to about 300 nm, whereby the ozone molecules split off one oxygen atom each. In the vast majority of cases, this atom is immediately connected to an oxygen molecule, so that the amount of ozone hardly decreases:

In a clean stratosphere, the most common loss process is the reaction of an oxygen atom with an ozone molecule. This creates two common oxygen molecules:

This is the so-called ozone-oxygen cycle , in which the amount of ozone remains approximately constant.

Despite the small number of ozone molecules at an altitude of 15 to 30 km, the ozone layer is noticeable in two atmospheric phenomena during twilight, both of which are due to Chappuis absorption :

About 3.5 billion years ago the earth's atmosphere did not contain any free oxygen (O 2 ). With the appearance of the first oxygen-phototrophic ( releasing O 2 during photosynthesis ) microorganisms, probably cyanobacteria , the release of oxygen (O 2 ) from water began. The released oxygen (O 2 ) did not initially get into the atmosphere, but was consumed in the oxidation of the base metal ions dissolved in the water , especially Fe 2+ , and the sulphide also dissolved in the water . Only when these oxidations were over after a very long time was it possible for free oxygen to accumulate in the earth's atmosphere. This phase in the evolution of the Earth's atmosphere is known as the Great Oxygen Disaster . Oxygen reached the stratosphere through convection and diffusion, where the ozone-oxygen cycle created the ozone layer.

As a component of certain gases, especially chlorofluorocarbons (CFCs), chlorine and bromine enter the stratosphere, which then contribute to the breakdown of stratospheric ozone. This increases the hard UV-B radiation on the earth's surface, which has negative effects on people and nature. In the polar night over Antarctica, clouds come into play, for which it is otherwise too warm in the dry stratosphere. The pollutants park on their particles and are massively released at sunrise in spring. In the lower part of the stratosphere, the ozone is almost completely broken down within a few weeks. Only when the polar vortex becomes unstable do ozone-rich air masses penetrate the ozone hole and close it, while ozone-poor air sometimes penetrates as far as South America and Australia, where it leads to increased UV-B values. Effects are to be expected but difficult to assess. In 1981, Veerabhadran Ramanathan described that the very strong greenhouse effect of chlorofluorocarbons alone would warm the earth's atmosphere by a whole degree by the year 2000 if emissions of this gas were not dramatically reduced.

The stratospheric ozone layer is not connected to the increased ozone occurring near the ground during summer smog .

Eminent scientists in the study of the ozone layer