Play media file
Graphic animation of the North Oplar Vortex and the Arctic Oscillation between January 24th and 29th, 2019: The expansion and protuberance leads to very cold temperatures as far as the middle of North America 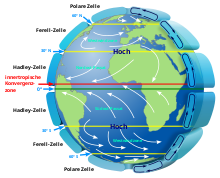 The two polar eddies ( English polar vortex ) over the Arctic and the Antarctic are large-scale high altitude lows with a diameter of approx. Less than 1,000 kilometers. Both are essential elements of atmospheric circulation and belong to the great systems of global teleconnection ; the bases of the two polar vortices are located in the middle and upper troposphere and extend into the stratosphere .

Polar vortices arise as cold air zones due to the negative radiation balance of the polar regions : At altitude, the air pressure decreases more clearly towards the pole than it increases near the ground in this direction. The pressure differences are opposed by the Coriolis force of circumpolar currents, weakly pronounced near the ground, strong eastward at the height: the winds are deflected to the right in the direction of movement, hereinafter referred to as polar east winds ; at the North Pole , the depth thus rotates counter, at the South Pole in a clockwise direction . Polar eddies occur more frequently in polar winter due to the particularly large temperature differences ; in summer they weaken due to their dependence on the temperature differences between the equator and the poles. The vortices are also differently pronounced from year to year , the strength of the northern one is indicated with the #AO index : If the northern vortex is strong and therefore well defined, there is a single vortex with a jet stream and the arctic air is good "captured"; if it is weaker, as in general, it divides into two or more smaller eddies, the strongest of which circulates near Baffin Island ( Canada ) and the other over northeast Siberia . ; when it is very weak, the flow of arctic air becomes more disorganized and masses of cold arctic air can move towards the equator, causing rapid and severe temperature drops in the corresponding areas.

The interface between the cold, dry air mass of the North Pole and the warmer and more humid air masses further south defines the position of the " polar front "; it usually has its center at approx. 60 ° latitude ; the " polar cell " marks the main underlying cell of the global climate system.

The inclusion of the polar air masses in the eye of the polar vortex is one cause of the formation of polar ozone holes , another is the very low temperatures, especially high above the continent of Antarctica .

The dynamics and potential of the polar vortices, the degree of their expression and the possible movement patterns ( -> Rossby waves ) are determined by means of the "AO-" ( -> " Arctic oscillation ) or" AAO- "index ( ->" Antarctic oscillation " ) calculated and expressed; probabilities of corresponding large and small-format weather influences can be derived from them.

The Arctic Oscillation (AO, also Northern Hemispheric Annular Mode (NAM)) is an expression of the air pressure contrast between the arctic and mid-latitudes in the northern hemisphere : The long-term static main position of the northern polar vortex is directly above the Arctic Ocean , with a tendency towards Icelandic lows . He has but due to the uneven distribution of warm water areas and cold land masses often two shifted centers: one over northern Siberia and one on the northeast canada - and is faster than destroys the AAO in the spring. In addition, the vortex can temporarily split into four nuclei, which are usually cloverleaf-like around a comparatively mild pole. This typically occurs with strongly oscillating jet streams and leads to extreme weather conditions throughout the northern hemisphere (polar vortex split) .

On average every two years in the winter of the northern hemisphere, the phenomenon of sudden stratospheric warming occurs, which is associated with a collapse of the Arctic polar vortex.

The Antarctic Oscillation of the Southern Hemisphere (AAO) is stronger and more durable than the A0 because the " Roaring Forties " are hardly slowed down by land masses ; it can be found near the edge of the Ross Ice Shelf, close to 160 ° west longitude . If the south polar vortex is strongly pronounced, the westerly winds of the middle latitudes (winds on the earth's surface between 30 ° and 60 ° west latitude) also become stronger and more sustained. If this polar vortex is weaker, high-pressure zones in the middle latitudes can push towards the poles, as well as the polar vortex, jet stream and polar front towards the equator: The jet stream "bends" and deviates to the south; as a result, cold, dry air quickly comes into contact with warm, humid mid-latitude air, resulting in a rapid and dramatic change in weather known as the " cold spell ".

Polar vortex on other planets

Polar vortex on Mars' North Pole, at an altitude of about 1,600 km above the Martian surface; to the right above the cyclone the corresponding ice cap
( Hubble Space Telescope , February 20, 2007)

The polar vortex over Saturn's South Pole is the only known hot such vortex in our solar system .