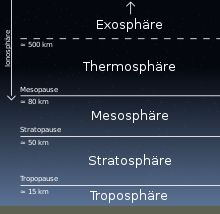 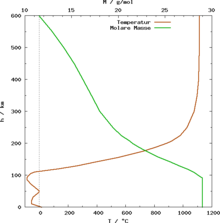 The troposphere [ tropoˈsfɛːrə ] (from ancient Greek τροπή tropé "twist, change" and σφαίρα sphaira "sphere") is the lowest layer of the earth's atmosphere and part of the homosphere . The troposphere extends from the ground to the beginning of the stratosphere . The boundary in between is called the tropopause .

The troposphere is only heated to a small extent by direct sunlight. Most of the solar energy is converted on the ground and released into the atmosphere, which is why it is warmest near the ground. Since rising air expands and cools down, the air temperature decreases with increasing altitude by an average of 6.5 K per kilometer of altitude (definition of the standard atmosphere ). This is called the vertical atmospheric temperature gradient .

In detail, the temperature decrease in dry adiabatic (= cloudless) sections is on average 1 degree per 100 meters ( DALR ), in humid adiabatic (cloud and fog-rich) areas it is about 0.6 degrees ( SALR ) per 100 meters . At the tropopause the temperature is around -75 ° C (at the equator) to -45 ° C (at the poles). From this altitude on, the temperature initially remains the same ( isothermal energy ) and then increases again in the stratosphere (inversion); at an altitude of 50 km it is again 0 degrees Celsius.

As warm gases rise and cold gases fall within the troposphere, the air is mixed and the formation of weather becomes possible. The existing water vapor forms clouds , rains and the troposphere is cleaned of dissolved gases and solids. Because of the inversion, the tropopause represents a mixing limit. Therefore, there is only a slight exchange of air with the stratosphere. All processes that influence the weather take place in the troposphere.

Outline of the troposphere

The troposphere consists of the following layers:

According to another definition, the planetary boundary layer extends (almost) to the ground. It is then divided into an inner layer close to the ground ( Prandtl layer , below 50 m) and an outer layer ( Ekman layer , above 50 m). The Ekman layer is characterized by wind rotation and the increase in wind with height (see Ekman spiral ).