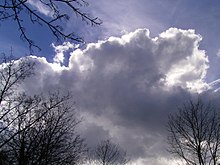 As weather (v. Althochdt. : Wetar = wind, labor) refers to tangible, short-term state of the atmosphere (also: measurable state of the troposphere ) at a specific location of the earth's surface , which among other things as sunshine , clouds , rain , wind , Heat or cold occurs.

The Meteorology classifies the local weather a certain time based on the various phenomena in the troposphere , the lower part of the atmosphere. The course of the weather determined by solar radiation and regional energy balance embossed atmospheric circulation .

Physically, weather can be described by thermodynamic state variables such as pressure , temperature and density . A “weather” in this sense can also be generated in a laboratory. In addition, there are such conditions and weather phenomena (for example winds) on other planets that have an atmosphere .

The weather characterizes the state of the atmosphere at a certain place and at a certain time. Characteristic are the meteorological elements radiation, air pressure, air temperature, air humidity and wind, as well as the derived elements cloud, precipitation, visibility, etc. The weather is the momentary picture of a process (weather events) that mainly takes place in the troposphere . In contrast to the weather and weather conditions, it can change several times a day.

The weather can be viewed as a system that is primarily shaped by the elements temperature, precipitation, cloud cover, wind and air pressure. Some of the elements are related ( correlation or causality ), while others are not.

Weather in meteorology and colloquial language

The meteorologists record the individual elements of the weather with measuring devices and the weather situation using terms such as stable or changeable, bright or cloud-free , 3/8 cloudy, overcast or cloudy, fog tendency , rainy, rain shower or stormy.

Elements of the weather and their measurement

The Meteorology studies the weather, quantifies its individual elements and characterized through a series of fundamental and special sizes (weather elements):

These basic quantities are measured in weather stations , on weather ships and lighthouses , with weather balloons or radiosondes , with airplanes and buoys . Weather satellites , other earth observation satellites and spy satellites (the latter provide weather information as a 'by-product') observe the troposphere from space and collect a particularly large amount of information on cloud cover (also on large-scale cloud systems), wave heights and water surface temperatures in seas and air currents.

Weather factors and their dynamics

The weather takes place almost exclusively in the lower 10 kilometers of the earth's atmosphere , the troposphere . Only here are there noticeable clouds because the water vapor, as a decisive factor, cannot get beyond the tropopause (about 8 to 15 km high, depending on the location and the season).

The weather is predominantly shaped by the lower 2 km of the peplosphere . Here there is often haze due to the accumulation of aerosols , and the nightly cooling due to thermal radiation. The ground friction slows the geostrophic wind , which is why it blows more in the direction of lower pressure than at higher altitudes.

The primary motor of the weather is the energy radiation from the sun and the radiation ( light and infrared ) to the clouds or into space . Today, in addition to terrestrial measurements, this is also recorded well by satellites and weather ships, radiosondes and other modern methods.

For the course of the weather, however, the flow conditions in the atmosphere are decisive, which depend on its changing humidity and the global wind systems , also on the regionally different heat reflection of the earth's surface ( albedo ), the terrain (especially the mountains , coasts and deserts) and from strong local influences (cyclical winds , inclination and vegetation on mountain slopes ...), and from the resistance to winds, which is determined by the roughness of the surface (forests, wind gaps , large buildings , etc.).

Therefore, in Central Europe, locally exact weather forecasts are only possible if all these details are accessible to modeling or reliable experience . The latter also know how to use lay people - see the proven Bauernregeln with "weather displayed" Bergen ( Wetterstein , Selva, etc.) or typical cloud formations as good weather - and fleecy clouds, fog , rain and scraps of clouds, cirrus , Föhnmauern etc.

Based on the weather recorded by large-scale measurements and thus the state of the atmosphere, weather models are used in meteorology to forecast the further development of the weather. Apart from that, however, it is also possible to make good predictions at the local level and with comparatively few resources, but this also requires more or less extensive knowledge.

Weather as an economic factor

For a number of companies, the weather has an impact on operational performance indicators. Classic examples of this are agriculture and the beverage industry , where weather can have a major impact on sales. While the harvest volumes are mainly affected in agriculture, sales of bottlers of mineral water and soft drinks fluctuate depending on the temperature. Other industries that weather can have a significant impact on include construction and tourism and leisure . For some companies, the weather risk can be so significant that it is specifically monitored in the company's risk management and, for example, hedged using so-called weather derivatives .

In 2012, the Cottbus regional court judged the weather as force majeure . Accordingly, bad weather is not at the expense of the client; it does not belong to the risk sphere of a buyer of construction work.

Influence of the weather on the course of wars

The weather situation plays an important role in many armed conflicts. Examples:

Since the early 1950s, the military has also been researching ways to influence the weather locally. However, using such techniques would be a violation of the ENMOD convention .

Wikinews: Weather  - in the news