This article deals with the optical effect or mirage. For further meanings see Fata Morgana (disambiguation) .

Mirage on a street

A mirage or mirage is a by deflecting the light to different hot air layers on the Fermat's principle based optical effect. This is a physical phenomenon and not a visual perception or optical illusion . The French physicist Gaspard Monge first scientifically examined and interpreted mirages in Lower Egypt in 1798 .

The refractive index of hot air is lower than that of colder air. Rays of light that first traverse a cold layer of air and then hit warmer layers of air at a shallow angle are refracted by the optically thinner medium up to a total reflection . There is no need for a sharp boundary between hot and cold air, nor does it have to be windless. Continuous change in the refractive index causes the rays to bend. When such air stratifications occur at a greater height in deserts, one sees reflections in the sky, the Fata Morgana.

In moderate latitudes, reflections can often be observed near the ground over dark areas.

The picture above shows an asphalt road. Because of its dark color, it heats up in the sun and with it the surrounding air. Above that lie cooler layers of air. Grass, houses and the red car are reflected in the street.

Creation of a mirage (explanation in the text)

The graphic illustrates the situation: a viewer sees the car directly along beam d . Another ray i is refracted because of the stratification of cold, i.e. optically denser, to warm, i.e. optically thinner, air towards it. For them it looks as if the beam is coming from the direction v and as if the car is reflected on the road. If she is not familiar with the phenomenon of mirages, she could suspect a wet road as the cause.

Magnifications are also possible, as well as multiple reflections, which make the reflected objects appear upright again. Seafarers of earlier centuries also called such phenomena on ships of flying Dutchmen . 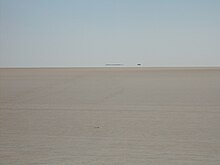 On the road that runs west of the Nile between Aswan and Abu Simbel in Egypt , a mirage forms quite regularly in the summer months because of the hardly changing weather conditions and solar radiation. The tourist buses stop here and passengers can take photos of an oasis with several mirrored water holes.

The name Fata Morgana comes from Italian. It means fairy Morgana , a name from the popular medieval throughout Europe Arthurian legend . Morgana inhabited the mystical island of Avalon, inaccessible to mortals . Accordingly, the appearance of a nonexistent island in the Strait of Messina between mainland Italy and Sicily has been associated with it.

Fata Morgana on the Norwegian coast: Only the mountain ridge, faintly visible in the fog, is in its real position.