Monge attended with his two brothers Louis Monge (1748-1827) and Jean Monge (1751-1813) a college of the oratorians , the Collège des Oratoriens in Beaune. This school offered a more liberal education than other religious schools, and so not only did the humanities come to the fore, but history, mathematics, and science as well. In 1762, at the age of 16, Monge went to Lyon , where he continued his education at the Collège de la Trinité . He continued his education there until 1764, when he returned to Beaune. Although Monge could not attend the military school École royale du génie de Mézières ( Charleville-Mézières ) as a student, he was employed there in 1765 as a draftsman and surveyor. Here he met Charles Bossut (1730-1814), a professor of mathematics at this school. With his support, he took over mathematics lessons as a tutor in 1766 and was thus responsible for supervising his courses. Monge used descriptive geometry for his teaching. In 1768 Charles Bossut was elected to the Académie des Sciences . Through him, Monge was encouraged to publish a work in geometry in 1770. In the following year he came into contact with Jean-Baptiste le Rond d'Alembert and especially with Nicolas de Condorcet ; The latter urges Monge to present four publications in mathematics, such as the calculus of variations , infinitesimal geometry , the theory of partial differential equations (see also Monge-Ampèresche equation ) and combinatorics .

After Monge was admitted to the Académie des Sciences in 1780 , he took over the professorship for hydrodynamics in Paris . When the French Revolution began in 1789 , he supported it. He became a member of the Jacobin Club and took part in the great horror . He himself was denounced and, in this unstable political system, only escaped the guillotine by fleeing quickly.

When the republic was proclaimed in 1792, he became Minister of the Navy, ministre de la Marine . In this capacity he had to pass the death sentence to King Louis XVI. enforce. A few months later he resigned from office because he could not do justice to the many competing parties and took over the leadership of the gun factories, gun foundries and powder mills of the republic. He is, with Fabre d'Eglantine , one of the initiators of the revolutionary calendar .

In 1794 he founded the École polytechnique in Paris and held the professorship for mathematics there.

Coming from Paris, Monge arrived in Rome on Tuesday, February 6, 1798 (see also the Italian campaign ). He was involved in the commission, Pope Pius VI. Forcing on behalf of the French First Republic to relinquish its secular authority. On the night of February 19-20, 1798, the Pope left the Vatican.

Napoleon Bonaparte called Monge as a member of the expedition to Egypt , where he took over the directorate of the Egyptian Institute, Institut d'Egypte from 1798 to 1799 .

After the second restoration in 1816, as a retaliatory measure, he was relieved of all offices and removed from the institute's list.

In addition to several physical discoveries, he has made a name for himself through the creation of descriptive geometry. 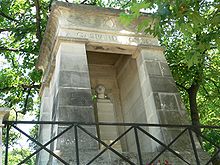 Monge was buried in the Paris Cemetery, Père Lachaise , 18th Division, before his remains were exhumed in 1989 and transferred to the Panthéon . Since the early 1950s, he has given its name to Île Monge , an island off the coast of Adélieland in Antarctica .

Monge published a descriptive geometry and introduced a theory of mirage . In 1783 he produced water from hydrogen and oxygen . This happened independently of Antoine Lavoisier , who also made the same discovery that year.
Monge was influenced in his scientific thinking by Antoine Laurent de Lavoisier and worked closely with Claude-Louis Berthollet . The writing Méthode de Nomenclature Chimique from 1787 by the quartet of authors, consisting of Antoine Laurent de Lavoisier , Guyton de Morveau , Antoine François de Fourcroy and Claude Louis Berthollet , also justifies the departure from the phlogiston theory. Pierre-Auguste Adet , Jean-Henri Hassenfratz , but also Pierre-Simon Laplace and G. Monge also belonged to this environment . He first examined the mirage in Lower Egypt in 1798 .

Herbert Bastian considers Monge to be the author of the manuscript Essais-analytiques sur les échecs from around 1780, based on font comparisons and other indications , the author of which merely describes himself as “Mr. Chapais , négociant à Paris ”.