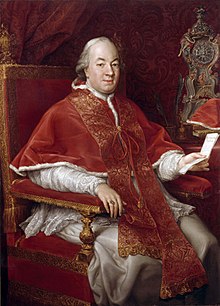 Life before his pontificate

Angelo Onofrio Melchiorre Natale Giovanni Antonio Braschi, son of an old aristocratic family, studied at the Jesuit college in Cesena and received a doctorate in law at the age of eighteen. During the conclave of 1740 he was secretary to the newly elected cardinal dean Tommaso Ruffo , for whom he administered the diocese of Ostia-Velletri during the conclave .

After the death of Cardinal Ruffo, Braschi became the valet of Pope Benedict XIV in 1753. After he had been ordained a priest in 1758 , the Pope appointed him his house prelate. On September 14 of the same year, Braschi became a consultant at the Apostolic Court . He then became secretary and auditor of Cardinal Carlo Rezzonico , whom he received from his uncle Pope Clement XIII. had been recommended. In September 1766 he was appointed treasurer of the Apostolic Chamber. Pope Clement XIV finally appointed Braschi cardinal on April 26, 1773. He stayed out of the ecclesiastical conflicts with the major European powers, which is why he was elected Pope as a compromise candidate.

Coat of arms of Pius VI. on the ceiling of the Lateran Basilica

In a conclave lasting almost five months , the church lawyer and Cardinal Count Braschi was elected to succeed Pope Clement XIV on February 15, 1775 . In his election he had to promise not to touch the Jesuit ban. The re-admission of the Jesuit order , which was repealed in 1773 , was carried out by his successor Pius VII in 1814 .

During his pontificate the church was exposed to strong state interference in various countries, especially in the Josephinist Habsburg Empire . Emperor Joseph II wanted to introduce the principle of the state church in Austria , which would have involved considerable restrictions on papal influence, even in spiritual matters. Therefore the Pope made a trip to Vienna in 1782 and tried unsuccessfully to persuade the Emperor to give in. On Easter Sunday, March 31, 1782, Pope Pius VI. the blessing Urbi et Orbi from the balcony of the Viennese church Am Hof and on April 16, 1782 visited the Peregrini Chapel , whose patron Peregrinus Laziosi he admired until the end of his life. On the occasion of his visit to Vienna, a Te Deum by the composer Johann Habegger († 1795) was sung.

Also in the empire Pius VI tried. to diminish the episcopal power compared to the papal by establishing a nunciature in Munich in 1785, against which the archbishops of Cologne , Trier , Mainz and especially that of the archbishopric of Salzburg , Colloredo , protested. The following year, the bishops passed the Emser punctuation , which demanded the approval of papal bulls by the bishops.

These conflicts faded into the background with the outbreak of the French Revolution in 1789. In France, the entire church property was secularized, the orders were dissolved, and the number of dioceses was severely limited in the course of de-Christianization . From now on, bishops and priests were appointed by government agencies and had to take an oath on the constitution.

The content of the " Declaration of the Rights of Man and of the Citizen " met with Pope Pius VI. upon resolute rejection. He expressed his dismay at the demands of the declaration in a Breve Quod Aliquantum on March 10, 1791 with the words: "Can you think of something more nonsensical than decreeing such equality and freedom for all?"

To constitute a normative equality that overrode the “natural perception” in society - this new idea seemed absurd to him. The rejection of human rights and popular sovereignty arose from an image of man whose skepticism about civil and personal freedoms of the people stood in sharp contradiction to the optimism that was reflected in the spirit of the French Revolution. Cardinal Giuseppe Garampi , who campaigned for an organizational and essential separation of church and politics, had a major influence on this breve . Pius VI defended the practice of indulgence .

Pius VI joined the coalition against revolutionary France with Austria and Naples and had to bear the consequences of the defeat in the First Coalition War . Parts of the Papal States were occupied by French troops in 1796 during Napoleon Bonaparte's Italian campaign . Bonaparte enforced the Peace of Tolentino (February 19, 1797), with which he achieved the cession of territory from the militarily defeated Papal State to France, the payment of a substantial sum of money and the delivery of valuable works of art. After renewed military interventions, the French occupied Rome in early 1798 and proclaimed the Roman Republic on February 15, 1798 . The Pope was declared deposed and exiled first to Siena , then to Florence . Already seriously ill, he was deported to France via Parma and Turin from the end of March 1799 . After a month's imprisonment in the citadel of Valence, he died there in the summer of 1799. Pope Pius VI. was first buried in the garden of the citadel; only after the conclusion of the concordat with Bonaparte was he allowed to be reburied. On December 24, 1801, the coffin of Pius VI. excavated, brought to Marseille with a team of four horses and shipped to Genoa . From there he came to Rome via Lerici, Massa, Pisa and Siena, where he was buried on February 18, 1802 in St. Peter's Basilica ( Vatican Grottoes ).

After the Pope's death in captivity, the Catholic Church seemed at an end. It was not until the following winter of 1799/1800 that the cardinals were able to meet in Venice under Austrian protection to form a conclave , from which Pius VII emerged in March 1800 .