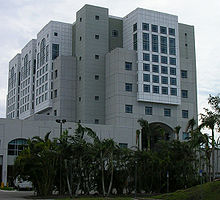 Given the rapid population growth in South Florida since the end of World War II in the 1960s, the Florida State Congress decided to establish a new state university. The FIU was officially founded in 1965. The first students were able to enroll in 1972. The 5,667 freshmen of the first year represented the largest number of first-time enrollments in the USA to date. The university has grown steadily since it was founded.

The former Tamiami Airport in the west of the Miami-Dade administrative district served as the campus . This campus, today named after the long-time President Modesto Maidique, continues to function as the main campus. In addition, the north campus (Biscayne Bay Campus) was inaugurated at the end of the 1970s. The Biscayne Bay Campus is located directly on Biscayne Bay and borders the Oleta River State Park. The Green Library acts as the central university library. It is the largest building on campus. The extensive inventory makes the FIU University Library the largest library in South Florida and one of the largest libraries in the entire southeastern United States.

In 2011 almost 48,000 students were enrolled at the FIU. The vast majority primarily use the main campus in the south. The student body is strongly influenced by the high proportion of students with Hispanic background. Almost 60% of the students assign themselves to this category.

The FIU has firmly established itself as a research-intensive state university in the North American higher education landscape. The Carnegie Foundation runs FIU as an institution with "high research activity." Only degrees from these research-intensive universities are fully recognized in Germany. Therefore, academics who have obtained their doctorate at the FIU are also entitled to use their academic title in Germany without additional information.

Academic success can be determined by several characteristics. Among other things, FIU was the preferred university of the valedictorians ( top of the class who give the graduation speech in their high school) from South Florida. In a US-wide ranking of the strictest grading systems ( toughest grading system ), the FIU was listed in the first 16 places in 2011.

FIU currently has 191 courses. Of these, 60 are bachelor's programs, 81 are master’s programs and three are assigned to specialist programs. There are also 4 “professional programs”. The ambitious young scientists are trained in 34 doctoral courses. This broad academic offering is provided by 23 faculties and institutions.

The following academic institutions and programs are particularly noteworthy:

College of Law : Legal training began in 2000. The FIU Law School was able to establish itself quickly. Since 2005 it has been able to regularly record the success that its graduates have the highest pass rate in the bar exam . Successful passing of the bar exams allows lawyers to work in court. In 2017, the FIU College of Law was once again ranked among the top 100 law schools in the United States by the US News & World Report.

Hurricane Center: After the massive damage caused by Hurricane Andrew in 1992, the federal government decided to move the National Hurricane Center to a storm-proof building. The FIU was awarded the contract and has been hosting this research center since 1995, which is responsible for forecasting weather conditions in the tropical and subtropical USA.

Hospitality Management : The Chaplin School of Hospitality and Tourism Management was recognized as a "Program of Distinction". In a 2002 ranking, the faculty took first place in the evaluation by the students. Lecturers and students have been running their own test brewery since 2012.

The FIU sports teams operate under the name Golden Panthers . In 1998 the university changed its organizational connection within NCAA Division I from the Atlantic Sun Conference to the Sun Belt Conference . After the realignment in 2013 , the Panthers moved to the Conference USA .

The FIU has had its own football program since 2002. After major defeats in the first few years, the team was able to establish itself in the southwest of the USA. In 2010 it finished the season in first place at the Sun Belt Conference and then won the first bowl with the “Little Ceasar's Pizza Bowl” . The dramatic game against Toledo ended 34:32 and was only decided shortly before the end with a spectacular move, which the university calls the "Motor City Miracle".