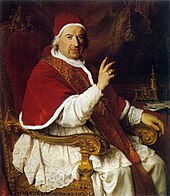 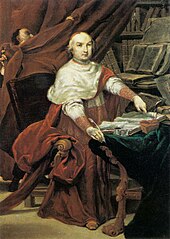 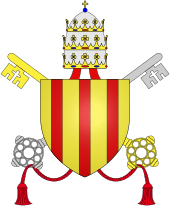 Life until the papal election

Coming from an impoverished nobility, Lambertini studied from 1688 at the Collegio Clementino in Rome. In 1694 he became a doctor of both rights . From 1701 he worked at the Curia and in this position a. a. involved in the process of canonization for John Nepomuk . As a postulator fidei , Lambertini pushed the case against the resistance of the Jesuit order . In April 1724 Lambertini was appointed titular bishop of Teodosia .

Since 1727 Archbishop of Ancona , he was on April 30, 1728 by Pope Benedict XIII. elevated to cardinal . The titular church of Santa Croce in Gerusalemme was assigned to him; In 1731 he became archbishop of his hometown of Bologna. There he oriented himself in his office to St. Charles Borromeo . On August 17, 1740, the important church lawyer and historian, who was not originally a papabili , was elected Pope after a difficult conclave lasting more than six months . Out of ties to Benedict XIII., Who had created him cardinal, Cardinal Lambertini took the Pope's name Benedict XIV.

As Pope, Benedict XIV modernized the curia, the sacraments and the monastic orders, especially in his first years in office . He was an opponent of the Jesuits . Their supranational influence in many countries and their extensive educational system was particularly annoying to the Catholic monarchs. The Jesuit ban did not come about until 1773 under Clement XIV.

After the death of Emperor Charles VI. On December 20, 1740, the Pope recognized Maria Theresa's claims to inheritance , as he, like his predecessors, saw the bulwark of Catholicism in the Holy Roman Empire. After this had led to resentment with France and Spain, Benedict XIV made a diplomatic U-turn and recognized the election of Emperor Charles VII on February 28, 1742. When he died in January 1745, Benedict was able to maintain a neutral position, although he was more Austrian Page was suspected of supporting the election of Friedrich August II of Saxony as emperor, while France accused him of sympathizing with Franz Stephan of Lorraine , Maria Theresa's husband. In November 1746 he finally recognized the latter's election as Emperor Franz I, whereupon papal relations with the imperial court in Vienna normalized in the following years.

Despite his friendly relationship with Lodovico Antonio Muratori , who was very sober about questions of Marian piety , Benedict XIV proved to be a promoter of Marian devotion . In his “ Papal Bull ”, Gloriosae Dominae , issued on September 27, 1748, he declares that devotion to Mary is based on the will of God and praises the Marian Congregations as an excellent means of holiness. In his work De servorum Dei Beatificatione he describes Mary's co- redemption as orthodox (II c. 32). He wrote about the liturgical devotion to Mary in De festis Christi et Beatae Mariae Virginis . Despite the reduction in religious feast days, in 1751 he allowed a feast of the motherhood of Mary. In 1752 he also allowed the celebration of the feast of the Immaculate Conception of Mary in the papal house chapel. However, a planned bull Mulierem pulchram , which pronounced the doctrine of the Immaculate Conception, remained unpublished.

Benedict XIV concluded several concordats with European states in which he made compromises willing to compromise without deviating from the principles of Catholicism . He was widely recognized as an intellectual in the European intellectual world. The first pope he used in his teaching the shape of the encyclical (teaching explanatory circular to the bishops), the first of Ubi primum he already wrote in 1740.

In 1741, in an address to bishops of Portuguese origin in South America, Benedict warned that human rights should be observed when proselytizing the natives.

In 1748 he was the first Pope to recognize the Prussian title of king. He also officially lifted the ban on the teaching of Nicolaus Copernicus . In 1751 he tightened the penalties against Freemasonry in his bull Providas romanorum , which his predecessor Clemens XII. in the bull In eminenti apostolatus specula .

In his encyclical Vix pervenit , addressed to the high clergy in Italy , in 1745 Pope Benedict turned massively against interest and usury . In § 3, paragraph I of this letter it says: "The sin, which is called usura and which has its actual seat and origin in the loan agreement, is based on the fact that someone demands more from the loan for himself than the other has received from him [ ...] Any gain that exceeds the amount borrowed is therefore illegal and usurious. "

In the bull Beatus Andreas of 1755 he allowed Anderl von Rinn to be worshiped, thereby legitimizing the anti-Jewish ritual murder legend surrounding him.

Benedict XIV is considered a great modernizer of the city of Rome. He initiated the renewal of the backward infrastructure as well as the artistic and intellectual flourishing of the city. He supported the establishment of foreign cultural academies, expanded libraries, lifted the ban on performances in the Roman theaters and reformed the universities. The completion of the Trevi Fountain , the renovation of ancient buildings and the beginning of the drainage of the Pontine Marshes all go back to his instructions. He died in Rome on May 3, 1758.

The Apostolic Succession from Pope Benedict XIV is documented up to Cardinal Scipione Rebiba :