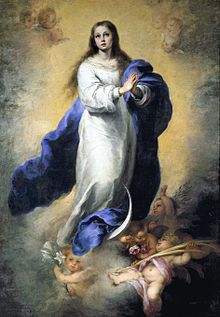 The Immaculate Conception of Mary ( Latin immaculata conceptio ) is a dogma of the doctrine of the Roman Catholic Church , according to which the Blessed Mother Mary was saved from every stain of original sin . In this way God saved Mary from sin from the first moment of her existence , because she was to become the Mother of God .

This teaching is to be distinguished from that of the virgin birth . It does not refer to the conception of Jesus , but to that of his mother Mary, who was naturally conceived, conceived and born by her parents, Anna and Joachim , who are only mentioned in apocryphal writings , but who were free from original sin (“without Flaw ”) remained. Immaculata (Latin for "the Immaculate") is one of the Marian titles of the Roman Catholic Church.

A separate ecclesiastical feast of the Conception of Mary , the full solemn feast of the Virgin and Mother of God , conceived without original sin , is celebrated on December 8th , nine months before the probably older feast of the Birth of Mary .

A day of the Conception of the Most Holy Mother of God by Anna was celebrated in the Eastern Church in some places from the 10th to the 12th centuries, in the west Anselm of Canterbury introduced the festival around the year 1100 for his diocese of Canterbury. For the first time, the Council of Basel declared in its 36th session on September 17, 1439 that through a special act of prevention, Mary was never tainted by original sin. In 1477 Pope Sixtus IV introduced the solemn festival in Rome, in 1708 the festival was named the Conception of Mary by Clement XI. prescribed for the entire Catholic Church.

Pope Pius IX set up on June 1, 1848 a committee of theologians to prepare a definition of the doctrine of faith. On February 2, 1849, he sent the encyclical Ubi primum to the local bishops to explore the opinion of the episcopate. Of the 603 surveyed bishops, 546 gave positive responses to the definition of a belief. Pius IX had the votes of the bishops published and commissioned theological draft definitions of a doctrine regarding the Immaculate Conception of Mary. The Pope himself played a major role in the final editing of the bull. Finally Pius IX announced. on December 8, 1854, in his bull Ineffabilis Deus ('The Ineffable God'), the dogma of the Immaculate Conception of Mary (Conceptio immaculata) :

An extension of this statement of faith consists in the fact that Mary - in contrast to all other people - no longer needs any purification in purgatory at the end of her life , since the purification of Mary already took place at the moment of her conception through liberation from original sin and she did not need any during her life Committed sins. This was stated in 1950 in the dogma of the bodily acceptance of Mary into heaven .

The dogma of the immaculate conception gained additional importance in the Roman Catholic Church through the apparitions of Mary at Lourdes . Here in 1858 Bernadette Soubirous is said to have had apparitions of a woman dressed in white (the Mother of God) several times. The "beautiful white lady" described by Bernadette revealed herself to her as "the immaculate conception".

Historical controversy within the Catholic Church

Disputation of the Immaculata Conceptio with the four church fathers and St. Bernhardin (missing painting from the Old Masters Picture Gallery in Dresden)

The Immaculata conceptio was because of the unsettled situation dogmatic subject of a theological dispute in the late Middle Ages , which made the teaching on original sin originated. One problem was how Mary could participate in the work of salvation, since she lived like all other people under the conditions of original sin. In order to rule out this consequence, one can either accept a divine purification (sanctification) of Mary, Sanctificatio Mariae , from original sin, as was represented by the Dominicans up to the 19th century, or one must assume that Mary received “without sin” as taught by the Franciscans .

Soon after the Franciscan Order was founded , in 1263, the General Chapter of the Order of Pisa, under the direction of St. Bonaventure, included the Feast of the Immaculate Conception among the Order's own festivals. The dispute was particularly fierce in the 15th century. a. the University of Paris , the Council of Basel and the kings of Aragon . The theological solution to the problem was worked out by Duns Scotus . According to his teaching, Mary was delivered from original sin from conception through the merits of Jesus Christ in advance. He certified his doctrine with the saying of pseudo-Anselmus : “Decuit, potuit, ergo fecit” ('It was fitting that he [God] could, therefore he [it]'). The teaching of the Church, which is derived from it, defined the bull Ineffabilis Deus of the blessed Pope Pius IX. , but the Council of Trent (1545–1563) already expressly excludes the Holy Virgin Mary from its statements about original sin.

Prominent opponents of the Immaculata doctrine in the Middle Ages were Bernhard von Clairvaux , Albertus Magnus and Thomas von Aquin , the Franciscan Bonaventure and the Popes John XXII. and Benedict XII. ; Most of the popes were neutral on this question, which was still lamented by the immaculists in the late Middle Ages, until a Franciscan came to the papal throne with Sixtus IV , who was involved in the dispute over the Libellus de veritate conceptionis Beatae Virginis Gloriosae of 1476/1477 rejected the position of the Dominicans, but at the same time avoided a clear statement in favor of the Franciscan position in the Constitution Cum praeexcelsa .

The Roman Catholic Church celebrates the solemn feast of Mary's conception on December 8th, nine months before the feast of the birth of Mary (September 8th) . The full name is Solemnity of the Virgin and Mother of God received without original sin ( Sollemnitas In Conceptione Immaculata Beatae Mariae Virginis ). In the German festival calendar it is also called Maria Wahlung . In 1708 the celebration of this feast was made by Pope Clement XI. prescribed for the entire Catholic Church. In years in which the solemn festival is superseded by the second Sunday in Advent because of its higher liturgical rank , it is celebrated on December 9th. Until 1955 the festival had a vigil the day before, December 7th .

The Conception of Mary as a public holiday

In Austria , Liechtenstein and the Catholic cantons of Switzerland (see Holidays in Switzerland ) as well as Argentina , Spain , Chile , Nicaragua, Portugal , Colombia , Italy and Malta , the Conception of Mary is a public holiday .

In Austria December 8th has been celebrated since the 17th century. 1646 announced Emperor Ferdinand III. in the Thirty Years' War the consecration of Austria to the Immaculate . Because of the pre-Christmas shopping season, which falls on this holiday, the closure of the shops was controversial. Since 1995, a change in the law on shop closing times has made it possible to shop in many shops and department stores on this day.

According to the particular norm for Germany, the Immaculata conceptio is not a mandatory holiday. In Bavaria , this day was a state-protected church holiday up to and including 1969 in accordance with Section 2 Paragraph 1 Nos. 2 and 3 of the Law on the Protection of Sundays and Holidays (FTG) of December 15, 1949 (GVBl 1950 p. 41), without having been recognized as a public holiday according to § 1 FTG.

Reception outside the Roman Catholic Church

Martin Luther confessed, at least in the first years of the Reformation , to follow the Immaculate doctrine. In his Resolutiones disputationum de indulgentiarum virtute of 1518 he declared his agreement with the late medieval council resolutions on this issue. In a sermon in 1520 he explained to his listeners that Mary had never come into contact with original sin at any moment in her life. As Mother of Christ, God gave her the highest degree of holiness and purity.

The doctrine of the immaculate conception cannot be derived from the scriptures belonging to the biblical canon . Therefore , unlike the doctrine of the virgin birth based on biblical texts , the Evangelical Church generally rejects them .

Iconography and representation in art

The typical artistic form of representation of a Maria Immaculata is derived from the Maria in the ear dress , who was venerated in Milan from 1387 . The Immaculata shows the Blessed Mother standing, without a child, mostly on a crescent moon and on clouds, sometimes also on a globe with a snake. The head of Mary is surrounded by a wreath of stars , usually made up of 12 stars. The Spanish art theorist Francisco Pacheco (1564–1644) derived the iconography typical of the Immaculate from a vision of St. Beatriz da Silva , after which she should be painted "in a white tunic and a blue coat" (especially in early depictions, there are occasional versions in a red or pink tunic with a blue coat, as is usual for Maria). According to Pacheco, the Madonna should also appear "in the prime of her age, as a twelve to thirteen year old (!) Lovely girl ...".

The Immaculata develops its peak form in the Spanish Siglo de Oro , with numerous important works by Bartolomé Esteban Murillo , José Antolínez , Jusepe de Ribera , Zurbarán , Juan Carreño de Miranda , Francisco Rizi , Mateo Cerezo and others. a. From there it spreads across Europe. The dogma of the Immaculate Conception from 1854 and the Marian apparitions of the 19th and early 20th centuries, above all Maria von Lourdes after 1858, produce a wealth of historical, romantic and modernist images.

Their saints attributes are:

→ Main article : Church of the Conception of Mary