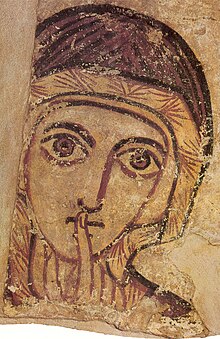 Anna (from Hebrew : חַנָּה, Hanna ; Greek : Αννα) is seen in several apocryphal writings from the 2nd to 6th centuries as the mother of Mary and thus the grandmother of Jesus Christ . It is not mentioned in the four canonical gospels . She has been venerated as a saint since the Middle Ages and is often portrayed artistically.

The legendary life story of Anna is based on the Old Testament model of Hannah and her son Samuel . After twenty years of childless marriage to Joachim , Anna gave birth to Maria .

According to the teaching of the Roman Catholic Church , Mary's conception occurred as an immaculate conception , that is, although she was naturally conceived by her biological father and conceived and born by Anna, she was saved from the harm of original sin by an act of divine grace .

Legend has it that when she was three years old, fulfilling a vow, they brought Mary to the Jerusalem Temple for education . In connection with biblical and apocryphal statements about the kinship of Jesus, the idea of ​​the "tri-marriage" ( trinubium ) of Anna and the resulting "holy clan" arose in the early Middle Ages . Then after Joachim's death she had two other husbands, Cleophas and Salomas, to whom she also gave birth to a daughter named Maria, who in turn had disciples and apostles as sons.

According to the legend written by Haimo von Auxerre , which is part of the Legenda Aurea of the Dominican Jacobus de Voragine , Anna and her sister Esmeria were daughters of Susanna and Ysaschar . Esmeria's daughter Elizabeth was the mother of John the Baptist . Maria Salomas was the mother of James the Elder and John - Maria Cleophas the mother of James the Younger , Judas Taddäus , Simon Zelotes and Joseph Justus . This legend ( Liber Secundus, Caput III ; part of the series Patrologia Latina published by Jaques-Paul Migne ) was first assigned to Haimo von Halberstadt by Johannes Trithemius , but this turned out to be untrue.

According to some apocryphal writings ( Proto -Gospel of James , Pseudo-Gospel of Matthew , Legenda Aurea, Annenviten of the 15th century) Anna and her husband Joachim donated a third of their property to the poor, orphans, widows and strangers in need. 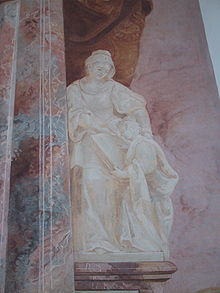 Figure of St. Anne painted by Franz Ludwig Herrmann in 1750 on the false altar of the Mammern Castle Chapel 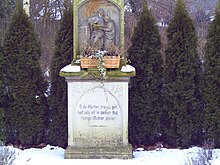 Relief representation of St. Anne from the late Gothic Anna Church in Düren

In early Christian times Anna was not worshiped at all; this began - but initially only hesitantly - in 550, when a church was built in her honor in Constantinople . In the time after which the sources are silent again until in 1142 Avda, the widow of King Baudouin , next to the Bethesdateich in Jerusalem , the St. Anne's Church was built, because there you guessed the home of Joachim and Anna. She experienced an enormous increase in veneration since the 13th century; this reached its climax with the increasing veneration of Mary in the 15th and 16th centuries. It manifests itself in legends about her vita, in miracle stories about the miracles worked after her death, in prayers and in pictorial representations, so also in the depictions of Anna selbdritt (Anna, Maria and the baby Jesus), which are particularly popular in the German-Dutch area , Anna Maria read teaching (Anna, Maria and a book) and the holy clan . For a long time, St. Anna was the favorite saint of Martin Luther and Emperor Maximilian . In 1496 he was accepted into the Annenbruderschaft zu Worms . In 1481 Pope Sixtus IV had Ann's memorial day added to the Roman calendar . In 1584 Pope Gregory XIII determined. their feast day, Annentag , on July 26th .

An alleged relic of Anna's head, the Annahaupt , has been in Düren since 1501 . The late Gothic St. Anne's Church was destroyed in World War II. It was rebuilt in 1956 by the architect Rudolf Schwarz . Further relics can be found in Apt , Provence, Vienna and other cities, e.g. B. Another head relic in Castelbuono in Sicily.

In Silesia , St. Annaberg has been a central pilgrimage site for centuries . Large demonstrations of faith took place there during the Nazi era. After the war, the place became a symbol of the lost homeland, but also a place from which reconciliation emanates. Today's Silesians also hold him in high regard. The expellees have taken the veneration of Anna with them to their new homeland and meet annually on Annatag z. B. on the Annaberg in Haltern am See.

She is the patroness of Naples , Brittany and of mothers and marriage, housewives , domestic servants, widows , poor, workers, miners , weavers , tailors , stocking makers , lace makers , servants , millers , shopkeepers , boatmen , rope makers , joiners , turners , Goldsmiths , the mines , for a happy marriage, for blessings of children and a happy birth, for finding lost things and rain. It is supposed to protect against fever, headache, chest and stomach pain, leprosy , plague , mental illness and thunderstorms (compare the young Luther's prayer to Anna to go to the monastery if she saves him in a severe thunderstorm).

In different parts of Germany (e.g. in Franconia and Westphalia ) the Annafest is celebrated as a folk festival every year. The Annakirmes in Düren, today a folk festival with more than a million visitors, goes back to the St. Anna pilgrimage founded at the beginning of the 16th century. One of the highlights of the annual Anna Octave is the solemn elevation of the Assumption Head from her medieval shrine.

In Heilbronn there is an old linden tree on the former site of a chapel dedicated to it. This natural monument, which is reminiscent of an old legend, is called Annalinde . In 2001 a field church dedicated to St. Anna was found near Bad Münder during excavations.

In Annabrunn near Mühldorf am Inn there is a St. Anna chapel as a place of pilgrimage.

The greatest pardon (procession) in Brittany leads to the fountain of St. Anne in Sainte-Anne-d'Auray on her name day .

In the Maltese language the Milky Way is called It-Triq ta 'Sant'Anna , literally "The Street of Saint Anne".