This article is about the tailoring profession. 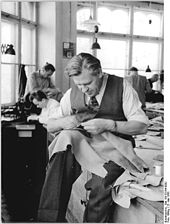 Schneider (medium high German snīden "cut") is a craft teaching job textile processing. The tailor's job is to turn textiles into clothing . The hand tools of the tailor have always been needles , threads , scissors and irons , and since the 19th century increasingly so have sewing machines . As a result of industrialization and ready-to-wear tailoring, craft tailoring has declined significantly.

Guild coat of arms of the tailors 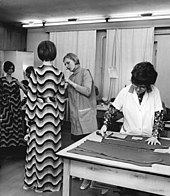 As a training occupation , a distinction is made between a ladies' tailor and a men's tailor, depending on which gender is preferred for clothing. The main difference lies in the way the clothes are cut. In the 19th century, tailoring systems developed in men's tailoring that produced an exact fit and a correct fit, while women's tailoring preferred more "modeled" garments that worked with folds, widths and fabric stripes in order to achieve "beautiful" effects. The dressmaker's profession is relatively new and only established itself as an independent craft in the course of the 19th century; in older guilds making of pants, becomes the master's certificate in addition to sewing and ironing samples Schauben etc. also required the production of a "women's piece".

Today, in the manufacture of ready-to-use clothing , i.e. any non-individual outerwear , the important manufacturing activities of the tailoring profession are largely carried out by workers in low-wage countries (e.g. China). The processing of fabrics into garments can only be automated to a limited extent and remains labor-intensive.

However, creative professions, such as fashion tailors and fashion designers , emerged from the tailor . Cutting is part of the training and task of the master tailor, in which he designs clothing, calculates (sets up) and cuts the cuts. In addition to the master, who was usually the owner of the business, there were the journeymen who mainly sewed, trained and ironed.

However, there is still, albeit to a much lesser extent, the bespoke tailor with its own studio , where the customer can have a costume , dress or suit made to measure , among other things . In addition to special model or fabric requests, the bespoke tailor can respond individually to customers with dimensions that differ from the clothing sizes.

There are specialized leather cutters ; the fur processors call themselves furriers .

White sewers deal with embroidery and decorations on white textiles such as B. bed linen , tablecloths or handkerchiefs , but also on women's underwear .

The tailor for alterations (originally patchcutter) is not entrusted with the production , in Germany an apprenticeship since August 1, 2005, who makes changes and repairs to finished outerwear according to the name.

You can enter exact body measurements on appropriate websites; later you will receive the ordered items of clothing by post. 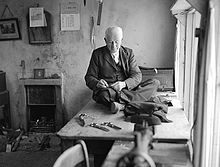 In Roman-Greek antiquity, draped clothing initially dominated; it was only the spread of clothing adapted to the body shape that made tailoring necessary. Until the 12th century, clothing was mostly still made by the family themselves or in monasteries ; therefore the tailoring profession did not emerge until the middle of the 12th century.

In France at that time a distinction was made between the professions tailor and seamstress ( sewing servant ). In contrast to the clothes maker, the French tailor was not organized in a guild and therefore had less prestige and jobs. For this reason, the profession in France was often carried out by Jews who were denied access to the guilds. This situation lasted until the abolition of the guilds in France after the French Revolution in 1789.

Because, according to the understanding of earlier times, they did women's work, tailors were exposed to popular ridicule for centuries. As is proven by many satirical traditions, the tailor was often seen as a loser. Even today it is said in some card games that the one who has a “ tailor ” has achieved particularly few points.

The sewing technicians were often rather skinny, sometimes also physically handicapped people who could not do physically heavy work. This contributed a lot to the bad image of the tailor crouching "cross-legged" with crossed legs on the table. With the advent of sewing machines from about 1830 (see also Schneider Revolution ), the auxiliary occupational quickly disappeared, but survived temporarily still in Zuarbeiter journeyman.

The oldest and longest strike in the history of handicrafts was the ban of the tailor journeyman from 1398, when they avoided the city of Constance for 10 years on their hikes in response to the closure of their drinking room , until the magistrate allowed the journeymen to use the drinking room again.