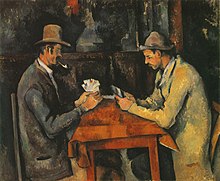 In Puritan circles, the card game was called the “devil's prayer book” well into the 20th century, in order to illustrate the dangers of gambling and idleness . The Dutch singer Bruce Low addressed The Card Game in 1974 with a bit of religious connotation.

Chinese playing card from around 1400

Playing cards have their origins in East Asia . Playing cards probably did not emerge until the 12th to 13th centuries, and the earliest playing cards can be found in Korea and China in the 12th century. Early illustrations show that the cards were originally kept folded and not fanned, suggesting that initially only games of chance , not combination games, were played. Coming from China, playing cards were brought to India and Persia as well as the Arab countries and then also came to Europe, where they were initially known in Italy and France.

In Europe, playing cards have been handed down in Italy since the late 14th century and later also in France. In the 15th and 16th centuries the now known playing card hands emerged, with the French, German and Spanish hands becoming the most popular. Many well-known card games originated in France and spread to Germany and other regions from the 17th and 18th centuries, including Bassette and its further development Pharo as well as Piquet and L'Hombre . At the end of the 18th century the modern double-headed playing cards came up and from the 19th century the backs of the playing cards were also printed, whereby they were marbled with early cards and later with dot and line patterns and finally with the Scottish plaid that is still common today . At this time games like skat , whist and bridge were developed, with canasta and rummy following in the early 20th century . 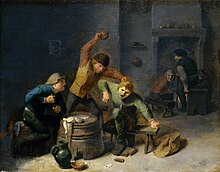 Adriaen Brouwer : A fight at a card game (painting around 1630)

Regardless of the individual rules of the individual games, there are a number of properties that all card games have in common. So there is a procedure - at least in a very formal game - used to draw lots for the seats or partnerships ; this is also used to determine who gives first.

Before each game, the cards have mixed and then lifted to be. It is given - if nothing else is required, cf. such as Skat or Doppelkopf - basically individually, with the dealer (divider) being the last to use. The players are usually only allowed to pick up their cards after the deal has been correctly completed. The cards are usually kept face down so that each player only knows his own cards.

In most card games, the players pick up the cards one by one after they have been dealt and sort them in their hand of cards ("stick"), whereby experienced players often forego a recognizable order in order not to make their hand of cards involuntarily guessable while playing.

The order of the players is handled very differently in the individual games. Today it is mostly played clockwise ; However, especially older games and games of Italian-Spanish origin are played counterclockwise, such as tarot or baccarat . Canasta is played counter-clockwise in Latin America, Spain and Portugal, but clockwise in Anglo-America, Great Britain and most continental European countries. Unless the individual rules say otherwise, in a clockwise game the player to the dealer's left (so-called forehand ) begins . B. not for bridge , where the dealer opens the bid.

The aim of these games is usually to discard all cards in hand as quickly as possible. The best known are Mau-Mau and Uno . The values ​​of the cards (number, color) can influence the course of the game, but are usually irrelevant for determining the winner. The basic rule usually states that the card to be discarded has the same value or color as the card that was last exposed. Further examples are:

In the random play, the goal is as many stitches to collect. The world's most popular trick-taking game is certainly bridge and its variations. The card values ​​determine the winner of a trick, but the winner of a round is only determined by the number of tricks achieved. Often many rounds are played. Further examples:

In some cases, a previous announcement also decides on the course of the game, the value of individual cards ( trump ) or even victory. The announcement is important for the following games:

In eye games, the goal is to collect as many card points ("eyes") as possible. This often happens through stitches, the number of which is irrelevant here. Important representatives in German-speaking countries are Doppelkopf , Schafkopf and Skat (in the color game or Grand); Also tarot (it is played in many regional variants) is one of the eye games. Further examples:

Another type of game variant requires you to collect as few tricks or card points as possible:

Here, collecting as many cards or card combinations as possible is a decisive criterion for the game, whereby the value of the individual cards is either not counted or does not determine the victory. Examples are Life and Death , Black Peter and the Quartet game.

In predatory games, open cards are “captured” with cards in hand. Examples are casino and hurricane .

The aim is to create as many cards as possible according to a fixed scheme:

As soon as a wide variety of additional rules are used, a classification cannot always be clear. The following games cannot be clearly assigned to a type: 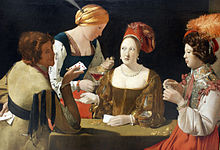 Georges de la Tour : The cardsharp with the ace of diamonds 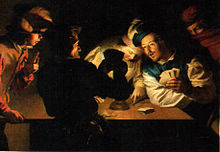 The use of playing cards for pure hazard games (risk game / game of chance ), which was widespread until the 18th century , can now be found mainly in casinos ; modern card games of chance such as blackjack , baccarat and red dog are played there.

In the past, the card game Pharo or Faro (from Pharaoh ) was very widespread and popular in gaming salons, clubs and gaming companies in Europe and later in the gaming salons of the American gold diggers. Variants are temples and my aunt, your aunt , historical forerunners are Landsknecht and Bassette . Today it is hardly played anymore; likewise the old casino games Rouge et noir and Trente et quarante .

The tontine should also be mentioned as a curiosity , a card game of chance based on the early life insurance of the same name .

The trick- taking game Écarté , also largely considered a game of chance, was widespread in the gaming salons of the 19th century and known as a game for very high stakes; his successors, like Ramso , were played in clubs until the 1950s. There are also a number of less well-known card games of chance, e.g. B.

A number of largely luck-dependent trick-taking games with a common basic principle such as whispering and typing (three-leaf) and related games such as Mistigri and Loo have also achieved fame at times. The old English pub game Nap can also be mentioned here. Furthermore, Hoggenheimer , the Black Jack forerunner Vingt et un , engl. Pontoon or German Seventeen and Four , as well as Trente et un , Macao and the English Newmarket .

The poker forerunners, such as the old German Poch or the French Poque and the English Brag , which is similar to poker, but older , are added as games with a betting character and a largely luck-dependent outcome of the game.

Many conventional card games demand and train skills such as concentration, attention, short-term memory and strategic thinking. Logical games like Set or math games like Elfer out! can teach children logic and numerical understanding. In the inquisitive Baroque period many educational card games originated. Among its authors were poets such as Erasmus Finx and Georg Philipp Harsdörffer .

Another variant are quartet games and Schwarzer Peter , which usually also impart knowledge. In an ironic sense, 32 heb auf can also be described as an educational game.

Play with your own hand

In addition to the games with classic hands, there are also many games with special cards today. These are often author's games with a variety of game mechanisms. Occasionally they cross the line to become a board game when the playing cards are used as a kind of game board . The à la carte card game award honors the best game of the year.

In contrast to traditional games, the cards in the publisher's edition and the rules of the game from a game designer are protected by copyright . Examples:

Trading card games such as Magic: The Gathering form a completely separate category . Playing cards can also be involved in board games or dice games . In most cases, however, they are used to influence the course of the game - for example, as a substitute for dice in the form of event cards - or they represent objects that can be used during the course of the game, such as raw materials or play money. 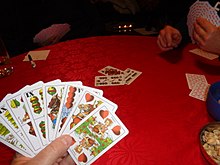 The Préférence players at the game