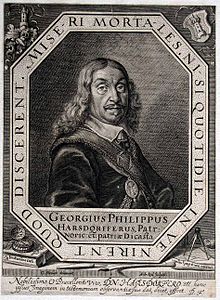 Georg Philipp Harsdörffer (correct: Harsdorf ) (born November 1, 1607 in Fischbach , today in Nuremberg ; † September 17, 1658 in Nuremberg) was a German Baroque poet and founder of the Pegnese Order of Flowers . He wrote his literature in the Upper German writing language . He was also a hobby heraldist .

Georg Philipp Harsdörffer belonged to the Harsdorf patrician family of Nuremberg and was the son of Philipp Harsdörffer and his wife Lucretia Scheurl . From March 20, 1623, Harsdörffer was enrolled at the University of Altdorf . Three years later he moved to the Faculty of Law in Strasbourg , where he enrolled on July 10, 1626.

In 1627, a year later, he began his five-year Cavalier Tour (also known as the Grand Tour ), which took him through France , Great Britain , Italy , the Netherlands and Switzerland . In 1630 he spent a semester at the University of Siena .

After his return in 1633, Harsdörffer joined the entourage of the Nuremberg ambassador Johann Jakob Tetzel . On June 9, 1634 he married Susanna Fürer von Haimendorf . In this year Harsdörffer advanced to assessor at the lower court; three years later he was transferred to the city court. From 1655 he was seen as a member of the Inner Council. In addition to these diverse tasks, Harsdörffer found enough time to create a great work as a writer , translator and scientist .

In November 1641 Harsdörffer was accepted into the Fruit Bringing Society by Prince Ludwig I of Anhalt-Köthen . He gave him the company name of the gambler and assigned him the motto in many ways . As an emblem, Harsdörffer wore the small, colorful English or French böhnlein ( Phaseolus vulgaris L. ). Harsdörffer's entry can be found in the Koethen society book under the number 368. There you can also read the rhyme law, which he composed in thanks for his inclusion:

The colorful Bönelein of colors of many kinds
Indulge, play in yourself with lust, as it were:
The name playing drumb has now been given to me,
Because in the mind you can feel pleasure,
Whenever we talk, we keep it practically
To share with what one has grasped in many
And foreign countries want: That is good for the fatherland '
And bring fruits for example 'in iedem stand'.

Memorial stone for Georg Philipp Harsdörffer in the Irrhain near Nuremberg

Together with Johann Klaj , Harsdörffer founded the Pegnese Flower Order in 1644 , but its literary activities came to a standstill after just a few years. His successor as president of the order was Sigmund von Birken in 1662 . It was only under him as the "Oberhirten" that the Flower Order became one of the great poets' associations of the Baroque period.

Harsdörffer wrote the text for the first surviving German-language opera , which was set to music by Sigmund Theophil Staden : The spiritual forest poem or joy game, called Seelewig (1644). Even if this pastoral seems too strophic for an opera, it deserves mention as an interesting reception of the Northern Italian opera style full of vanitas motifs, interspersed with many late medieval elements .

Georg Philipp Harsdörffer died at the age of 50 on September 17, 1658 in Nuremberg and was buried in the local Johannisfriedhof .

The German-minded cooperative also knew Harsdörffer as a member, under the name of the Kunstspielende . This association had u. a. The aim is to preserve the German language and to avoid the influence of foreign words. The famous evening song comes from Harsdörffer:

1. The day has now passed / With its burden of worry,
The night has started / And all work rest.
The light has decreased / With our lifetime;
We are now getting closer / The gray eternity.

2. How we lie to bed / So we lie in the grave:
How should we enjoy / Haab lost to the world?
As we go to sleep / death becomes mean to us:
Nobody can last long / It must have died.

3. How we leave the clothes / Before we fall asleep,
So we have the same mass / nothing but the corpse stone.
A Leilach covers me / Here and in the grave of death,
Until the sun awakens me / And the staff of Christ. [...] (7 stanzas)

The Lutheran Harsdörffer from Nuremberg was ideologically close to the circle around Martin Opitz and the Fruitful Society. Significantly, there is not a single Roman Catholic in his list of 41 recommended authors of his time. Nevertheless, he could not make friends with the Central German written language cultivated in Meißen and Silesia and used the Upper German written language, which is otherwise scolded as Catholic Jesuit German , for his German-language works . In the preface to the third part of his best-known work Poetischer Trichter he says in 1653:

Which excuse and therefore which type of writing is the purest and most correct / we do not want to decide / but let the Meisner and Silesians fight it out; remain in the meantime with what was reported in the appendix of the first part of the Poetic Funnel [...]. All of this serves to assert:
I. That our language as it is in use today in Upper Germany / special warning of the old German to love and practice completely absent unusual / or self-invented new words.
II. That everyone who writes / interprets or writes with understanding according to his / her dialect / can show sufficient diligence and receive due praise.
III. That because of the incomparable style of writing one should not reject or despise a good book / and look more at the content / than the composition. "

Emblem in the book Icones mortis

Contributions to the sciences

Harsdörffer published a book on entertainment mathematics in Nuremberg in 1651, which is based on a book by Daniel Schwenter published posthumously by his heirs ( Deliciae mathematicae et physicae or Mathematical and Philosophical Erquick hours ). It also contains news about various inventions and machines. For example, the diving boat of Cornelis Jacobszoon Drebbel is mentioned here (which Marin Mersenne also described in his Cogitata Physico-mathematica in 1644 ), an apparently self-propelled cart by the blacksmith Hans (Johannes) Hautsch in Nuremberg, a chain of buckets for earthworks, music boxes and the like Roller wheel controls for looms, a paddle wheel drive for ships by a knight in Malta and a dredging machine for ports that Harsdörffer saw in Genoa. He also describes a well drilling rig from Amsterdam, similar to Mersenne.