Drebbel is a redirect to this article. For the moon crater, see Drebbel (moon crater) . 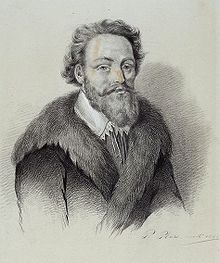 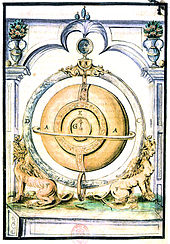 Cornelis Jacobszoon Drebbel (* 1572 in Alkmaar , Netherlands ; † November 7, 1633 in London ) was an inventor , physicist , alchemist and mechanic . He lived in England for most of his life . He is considered to be the inventor of the submersible .

Around 1590 he began his training at the Academy in Haarlem , where he was also trained by the engraver Hendrick Goltzius . After his marriage he lived in Alkmaar , where he published engravings and maps. Since 1604 he worked in the service of the English king Jakob I. Drebbel became famous for his sometimes unusual inventions. The most important of these are

In 1610 he was called to the court of Rudolf the Second in Prague . After the Emperor's death, Drebbel returned to London in 1613. At the request of Emperor Ferdinand II , he went to Prague again as tutor of his sons and was taken prisoner after the capture of Prague in 1620, where he also lost his property. On the intervention of the English king he was released and went back to London. At the end of his life he became impoverished and became a landlord near London Bridge.

He introduced or made known scientific devices such as thermometers, telescopes and microscopes in England and used the thermometer in chemical experiments. He sharpened lenses and Constantijn Huygens bought one of his microscopes .

Drebbel built the first maneuverable underwater vehicle there. This was a leather-covered wooden rowing boat with which Drebbel reached a water depth of 3.6 meters. According to tradition, in 1620 he was able to travel from Greenwich to Westminster on the Thames within three hours. 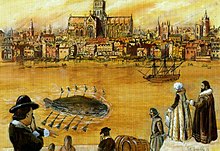 This first " submarine ", known by contemporary observers as the moving submersible , was built in England and had space for twelve rowers and a few passengers. Drebbel used a type of snorkel to oxygenate the interior of the boat underwater . Drebbel later built two more larger submarines that worked on the same principle. According to legend, even the English King James I went with one of Drebbel's submarines to demonstrate its safety; What is certain is that the King attended such a demonstration on the Thames. Despite the successful proof of functionality of Drebbel's submarines, his ideas did not arouse the interest of the Royal Navy . However, he was involved on the English side in the relief of the siege of La Rochelle in 1628.

According to Robert Boyle , he recognized that air contains a quintessence that is necessary for breathing and presented a liquid in a bottle that replaces stale air (according to JR Partington, alkali for the absorption of carbon dioxide, which according to Claus Priesner does not explain the necessary oxygen supply ). What it was exactly is not known. He knew that when saltpetre is heated, a gas is released.

He invented tin pickling in scarlet dyeing (extraction of the dye from the scale insect cochineal), used by his son-in-law Abraham Kuffler in his dyeing, and suggested the construction of sulfuric acid factories in England (in Ward). It is not known exactly whether he introduced the vitriol process on an industrial scale in England. Some also credit him with the invention of fumed mercury .

His A short treatise on the nature of the Elementum (Leiden 1608) deals with the transformation of the elements (which means fire, water, air, earth) and his De quinta essentia (1621) deals with the use of minerals, plants and metals in medicine .

The Drebbel lunar crater is named after him.