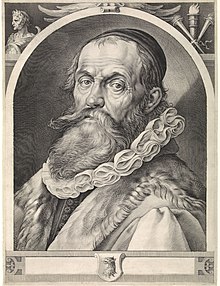 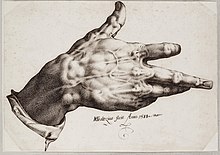 Goltzius learned from Dirck Volkertszoon Coornhert and Philipp Galle . He set up a copper printer and from 1590 toured Italy and Germany for several years , keeping a keen eye on everything and doing excellent studies. Goltzius has made a name for himself in the technique of copper engraving. He developed that plastic treatment of the engraving, which tries to conform to the laws of modeling in the most precise way through the swing and movement of the shadow lines, through their swelling and disappearing, through the different ways of their cutting. His pen tears, also called feather art pieces or Dutch pen works , in which he imitated the engraving technique with pen and ink on paper or parchment, were in great demand . During his lifetime he was already celebrated as one of the most brilliant engravers and artists.

He did his craft so admirably, although his right hand was misshapen after being burned as a child. He depicted this on an engraving in a special kind of self-portrait, as if it had been created for the burin (see adjacent illustration: Goltzius' right hand , 1588). Against this background, it is often assumed that Goltzius used his right hand to prick and his left hand to paint, as the friend and biographer Karel van Mander reports in his Schilder-Boeck . 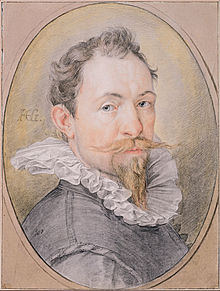 At the age of 42, Goltzius began to make paintings as well. As a painter , draftsman and engraver he was under the influence of the Mannerist tendency that was brought about by the imitation of Italian masters and which dominated Dutch art at that time. His copperplate engravings (approx. 330) are masterly in their technique and prefer violent and erotic motifs as well as allegories, such as those provided by the Flame Bartholomäus Spranger , who worked at the Prague imperial court and to whom Goltzius remained stylistically attached in his painting. He also made excellent woodcuts in chiaroscuro . In his workshop, the elite of engravers of that time were trained, such as Jakob de Gheyn II , Jakob Matham , Pieter de Jode the Elder , Jan Muller and Jan Saenredam , who each continued the mannerism of their teacher in their own way. The number of engravings made after “Goltzius” is very large. Goltzius-style leaves were a popular export item and can now be found in almost all major museums and collections.