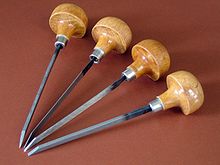 A graver (also merely prick called; formerly pointer Burin, Sculper, Scorper) is an engraving tool , that since the Renaissance is in use. It is mainly used for processing metal ( copper engraving , steel engraving ) or wood ( wood engraving ).

The graver has a wooden handle and is almost always moved directly by hand and not hit with a hammer . The handle is usually pear-shaped to allow a firm grip. Usually the end of the handle facing the cutting edge is flattened so that the fingers do not obstruct the forward or downward movement. The cutting edge is typically made of hardened steel .

The length of the digger is between 8 and 11 cm. The cross-section can be different. The sharp blade is there

With the development of copper, steel and wood engraving, the grave engraver quickly became a preferred tool for artists and other people working with these materials. It was part of the standard equipment of late medieval workshops. In the early modern period , the burin was one of the instruments used in embarrassing questioning in inquisition and witch trials ; Whether it was also used as an instrument of torture has not been proven; In several cases, however, it is recorded in the trial files that the defendants only made confessions after being threatened with “prickling”.

Different names used to be used for the various works, or some are still used today: