The Royal Observatory in Greenwich Park

Greenwich ([ ˈgɹɛnɪtʃ ] or [ ˈgɹɪnɪdʒ ]) is a district in south-east London . It is located on the south bank of the Thames in the Royal Borough of Greenwich . The district was formerly the center of the British Navy, the historic prime meridian runs through its observatory and the Greenwich Mean Time is named after it.

The city was the residence of several English kings after the Palace of Placentia was built in the early 15th century. After the civil war , the palace fell into disrepair. In its place was the Royal Maritime Hospital, which was converted into the Royal Naval College in 1873 . It has been used by the University of Greenwich and Trinity College of Music since 1998 . Other attractions include the Royal Greenwich Observatory , Greenwich Park and the National Maritime Museum . Part of Greenwich has been a UNESCO World Heritage Site since 1997 .

The historic center is on a wide plain on the south bank of the Thames, which at this point has a large semicircular bend that encloses the Isle of Dogs . To the south of the center, the terrain in the park rises steeply, the border to Blackheath, bordering south, is around 30 meters higher. The higher parts of Greenwich consist of sedimentary deposits that cover a layer of limestone. To the west, across the Ravensbourne River , is the former port town of Deptford , and to the northeast is the Greenwich Peninsula , the former industrial center.

The name follows the Greenwich Old Saxon Grenevic (or Grenewic ), which literally means "Green Village" or "green village", it being more turn from Latin vicus is derived. The modern spelling on Green- [ ˈgɹi: n ] (English for green ) repeats this definition, but the pronunciation follows the old name with a short e [ ˈgɹɛnɪtʃ ], in upscale English also a short i [ ˈgɹɪnɪdʒ ]. The w-sound is also spoken in US cities of the same name, but is omitted in the English place (pronounced like "Grennitsch" in London and "Grinnitsch" in the rest of England).

Barrows in the southwestern part of Greenwich Park indicate that the area was inhabited as early as the Bronze Age. The graves were reused by the Anglo-Saxons in the 6th century . In the east of the park, excavations in 1902 discovered the remains of a Roman villa or a temple with 300 coins from the time of Emperor Flavius ​​Honorius in the 4th century. The Roman road from Londinium (London) to Portus Dubris (Dover), Watling Street , ran through the extreme south of Greenwich. She followed an earlier Celtic route between the present-day cities of St Albans and Canterbury .

During the reign of King Æthelred, the Danish fleet anchored on the banks of the Thames and camped on the adjacent hill. From there they attacked Kent and took Canterbury in 1012. They detained Archbishop Alphege in Greenwich for seven months and stoned him to death when he refused to pay a ransom. Alphege was canonized as a martyr. A parish church was built in his honor. Today's St Alfege Church was built in 1714/18 according to plans by Nicholas Hawksmoor . Traces of the Danish camp can be found on the border with Blackheath .

Coat of arms of the Metropolitan Borough of Greenwich

The Domesday Book names the manor Greenwich, which was owned by Odo of Bayeux and was confiscated by the Crown in 1082. Before 1300 there was a royal hunting lodge there. Subsequent monarchs were regular visitors. Henry IV had his last will there and Henry V left the estate to Thomas Beaufort, 1st Duke of Exeter .

Humphrey, Duke of Gloucester , regent of Henry VI. , had a stately building erected there in 1447 and the park walled off. After Humphrey's death, Margaret of Anjou named the building the Palace of Placentia . The construction work was completed under Edward IV . The palace was the main residence of Henry VII. King Henry VIII and the queens Maria I and Elizabeth I were born here.

After the English Civil War , the palace fell into disrepair and was finally demolished in 1660. Charles II commissioned the construction of a new palace, but only the east wing could be completed, which nevertheless remained uninhabited. The remainder of the site remained undeveloped until the Greenwich Hospital was built in 1694. Inigo Jones built the Queen's House on the hill above the hospital in 1616 for Anna of Denmark . The latter has been the main building of the National Maritime Museum since 1914 .

In 1997, Greenwich was named Maritime Greenwich in the World Heritage Site of UNESCO received, this due to the variety and quality of buildings that are of historical and architectural interest. These can be divided into three groups: Waterfront, Greenwich Park and City Center. In recognition of the importance of the district for the development of astronomy, the asteroid (2830) Greenwich was named Greenwich .

The Cutty Sark , a clipper , was laid up in a special dry dock on the Thames as a museum ship. A fire destroyed part of the ship in May 2007, but around half of the ship's equipment had been relocated for renovation work. The ship was rebuilt and has been accessible again since spring 2012. In addition to the Cutty Sark, the sailing yacht Gipsy Moth IV , with which Francis Chichester had sailed around the world, was exhibited from 1972 to 2004 . Near the Cutty Sark is a circular building with the entrance to the Greenwich Pedestrian Tunnel , opened in 1902 , which leads to the Isle of Dogs on the north side of the river.

The naval academy built by Christopher Wren , the Royal Naval College , is the center of the world heritage and is administered by the Greenwich Foundation . Several of the buildings are now used by the University of Greenwich , and one (the former Greenwich Hospital ) by Trinity College of Music . The building complex also includes the Painted Hall (former dining room) designed by James Thornhill and St. Paul's Chapel , built by James Stuart . The former naval academy had a research reactor (JASON) that was in operation from 1962 to 1996 and was removed in 1999.

East of the Royal Naval College is the Trinity Hospital poorhouse, founded in 1613, and the oldest surviving building in the city center. The Greenwich Power Station is immediately adjacent . The massive brick building was built in 1902–1910 as a coal-fired power station to supply the London trams with electrical energy. Today it burns oil and gas and serves as a reserve power station for the London Underground . 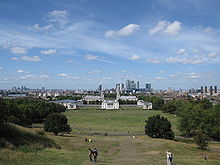 Behind the former naval academy is another symmetrical group of buildings with an arcade around the Queen's House designed by Inigo Jones . This building is now the home of the National Maritime Museum . Adjacent to the south is the 73 hectare Greenwich Park , one of the royal parks in London . It was created in the 17th century as a hunting ground for the Palace of Placentia .

The park rises towards Blackheath and there is a statue of General James Wolfe at the top of the hill . The hill is also the site of the former Royal Greenwich Observatory , through which the historic prime meridian runs (it is marked there on the ground and on the building) and where Greenwich Mean Time was determined. Today the building serves as a museum of astronomical and navigational equipment, in particular the longitudinal clock by John Harrison .

Georgian and Victorian architecture dominate the city center, which extends west of the park and the Royal Naval College. A system of one-way streets leads around a covered market square, Greenwich Market . The road Croom's Hill is the site of the Fan Museum , the world's only Museum of subjects . There are also two theaters in the city center, the Greenwich Theater and the Greenwich Playhouse .

The Greenwich Line , a railway line that crosses under Greenwich Park in a tunnel, runs in west-east direction . The Greenwich train station is located approximately 400 meters southwest of the historical center and is one of the oldest in London. Trains run to North Kent from London's Charing Cross and Cannon Street terminus stations. Another train station in Greenwich is Maze Hill .

The Docklands Light Railway (DLR) crosses Greenwich in a north-south direction. The light rail trains run to Bank and Stratford in the north and Lewisham in the south. They stop at Cutty Sark Underground Station and Greenwich Railway Station.

In addition, Greenwich is served by several bus routes and shipping routes on the Thames. The Greenwich pedestrian tunnel leads to the Isle of Dogs .