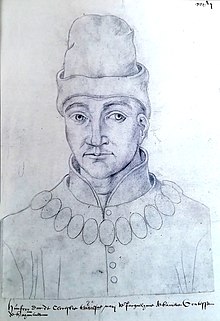 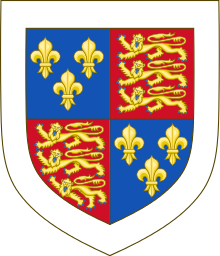 Coat of arms of Humphrey, Duke of Gloucester

Humphrey, Duke of Gloucester KG (born October 3, 1390 , † February 23, 1447 in Bury St. Edmunds ) was an English nobleman and temporarily regent of England . He was the fifth son of King Henry IV of England and his first wife Mary de Bohun .

Humphrey was named after his grandfather Humphrey de Bohun, 7th Earl of Hereford . In 1414, Humphrey was raised to Duke of Gloucester and Earl of Pembroke . In 1415 he took up the post of Lord Warden of the Cinque Ports . When his brother, King Henry V died in 1422, he became regent of the kingdom and protector of his young nephew Henry VI .

Around 1422 he married Jakobäa , the Duchess of Straubing-Holland , daughter of Duke Wilhelm II of Straubing-Holland. This marriage gave Humphrey the title of Count of Holland, Zealand and Hainaut , which was claimed by the Duke of Burgundy, Philip the Good .

Loss of influence and death

In 1441 Eleanor Cobham was tried against the king for witchcraft. She was accused of trying to secure her husband's rule by magic. This was an attempt by the court party to Cardinal Henry Beaufort and William de la Pole, 1st Duke of Suffolk , the influence that their husband had on Henry VI. had to weaken. She was sentenced to three barefoot penance walks through London and subsequent life imprisonment. She died in prison.

His position at court was weakened by the trial of his wife. In 1444 he was no longer involved in the peace negotiations in Tours, in which the wedding between Henry VI. and Margaret of Anjou was agreed. Furthermore, the king declared his renunciation of the county of Maine. When Gloucester learned of this secret clause, he wanted to discuss it before Parliament.

The Duke of Suffolk acted quickly and had him arrested for high treason in 1447. He died under unexplained circumstances a few days later at Bury St. Edmunds in Suffolk .

Suffolk outlived him by a full three years. He was killed in circumstances as mysterious as the Duke of Gloucester. But the people had long since named him Good Duke Humphrey .

With the gift of over 250 books, he founded a library in Oxford. He promised money to build a new building. This was destroyed in the 16th century. His name lives on in Duke Humfrey's Library, part of the Bodleian Library in Oxford .

He appears as a character in the plays " Heinrich V. " and " Heinrich VI. " By William Shakespeare .