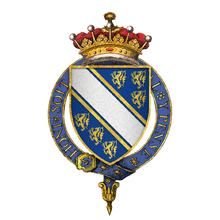 Humphrey X. de Bohun came from the originally Anglo-Norman family Bohun . He was the only son of William de Bohun, 1st Earl of Northampton and Elizabeth de Badlesmere . His father was originally a poor knight as a younger son, but his mother had inherited part of her brother Giles de Badlesmere 's important property in 1338 . His mother died in 1356, and after his father's death in September 1360, Humphrey became the heir to his parents' estates and the title of Earl of Northampton . After his uncles John and Humphrey IX. en Bohun had both died without descendants, Humphrey also became heir to the extensive estates of the Bohun family and the titles of Earl of Hereford and Earl of Essex in 1361 , making him one of the richest magnates in England. In addition, he inherited the office of Lord High Constable . However, since he was still considered a minor, Richard FitzAlan, 10th Earl of Arundel, became his guardian.

After he officially came of age in 1363, he led the escort that King Peter of Cyprus escorted from Dover to London that same year . In 1365 he was accepted into the Order of the Garter. In 1369 he led an embassy to Milan to negotiate the marriage between Violante, a daughter of Duke Galeazzo II Visconti of Milan, with Lionel of Antwerp, 1st Duke of Clarence , a son of the king. During the Hundred Years War he was one of the commanders of the English army in the unsuccessful French campaign of John of Gaunt in 1369 . In 1371 he traveled to Brittany as an English envoy . The English fleet, led by Sir Guy Brian , encountered an opposing Flemish fleet under the command of Jan Peterson off the coast of Brittany. After a fierce three-hour battle, the British were victorious and were able to send 25 captured ships with numerous prisoners, including Peterson, to England. Presumably, however, Bohun fell ill soon after and died at the age of 31.

He married after September 9, 1359 Joan FitzAlan , a daughter of his guardian Richard FitzAlan and of Eleanor, the widow of John de Beumont, 2nd Baron Beaumont and daughter of Henry Plantagenet, 3rd Earl of Lancaster and Maud de Chaworth . He had two daughters with her:

He was buried in the Walden Abbey family monastery in Essex . Since he died without male descendants, his titles of nobility became extinct and his two underage daughters inherited his lands. The English Edward III. passed the custody of the two wealthy heiresses to his youngest son Thomas of Woodstock, who eventually married Eleanor. Thomas of Woodstock planned to deport her sister Mary to a convent in order to take possession of the entire inheritance. However, during an absence from him, his brother John of Gaunt married Mary to his eldest son Henry, so the Bohun legacy eventually had to be shared. Eleanor's husband received the lands of the Earldoms of Essex, Mary's husband that of the Earldoms of Hereford and Northampton.