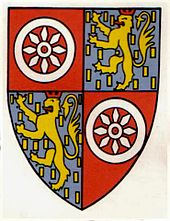 Coat of arms of Adolf von Nassau as Archbishop of Mainz 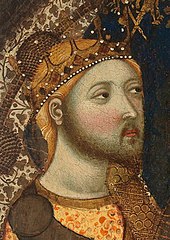 In the second Ferdinandic War , which broke out in December of the previous year, the militarily superior Henry II marched from Castile to Lisbon . A short time later, the Castilian fleet under Ambrosio Boccanegra also reached the capital of Portugal and on March 7th defeated the Portuguese fleet, which was under the hesitant command of Lanzarote Pessanha , in the naval battle of Lisbon . Since it was impossible for the Kingdom of England, allied with Portugal, to send support after the heavy defeat in the sea ​​battle of La Rochelle last year, Henry II was able to force the Treaty of Santarém on the Portuguese King Ferdinand I on March 19 . Ferdinand has to drive the followers of Heinrich's predecessor Peter I out of Portugal, who lose all hope of the overthrow of Heinrich. Ferdinand also has to take several hostages, including Admiral Lanzarote Pessanha and Juan Alfonso Tello , the queen's brother. In addition, Heinrich receives several Portuguese towns as security for the implementation of the contract. 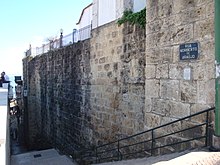 The Ferdinandine Wall in Lisbon today

In September Ferdinand began building a new wall around Lisbon as a consequence of the lost war. The erection of the Ferdinandine Wall lasts until 1375 .