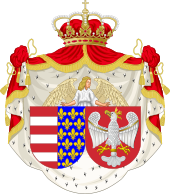 She was the daughter of Ludwig I , King of Poland, Hungary and Croatia from the House of Anjou and his wife Elisabeth of Bosnia , daughter of the Bosnian ban Stjepan II. Kotromanić and Elisabeth of Kujawia. Hedwig's marriage to the Lithuanian Grand Duke Jogaila in 1386 made it possible to forge a favorable political alliance with the Grand Duchy of Lithuania for Poland . The marriage was also an important prerequisite for the advancing Christianization of Lithuania.

Hedwig's official title de jure , like that of Anna Jagiellonica , was actually Król Jadwiga (lat. Hedvigis Dei Gracia Rex Poloniae ), which means "King Hedwig", since she was ruler of the kingdom in her own right and there is no female succession to the throne in Poland knew. All crowned rulers of Poland, who were rulers of Poland by their own right , bore this title regardless of gender. The wives of the kings, who only became Queen of Poland through marriage , received the official title of Królowa (lat. Regina Poloniae ).

The Lady has been wearing in 1656 the title of "Queen" (regina) of Poland - as a result of official commitment to Catholicism as state religion by King John II Casimir. In Lviv oath.

After the death of Kasimir the Great , the last monarch of Poland from the Piast dynasty in the royal line, Poland was ruled in personal union from 1370 by his nephew, the Hungarian King Ludwig I of Anjou .

His successor was problematic as he had two daughters but no son. In the Kaschau privilege of September 17, 1374, he had obtained the assurance of the Polish barons in exchange for essential concessions that one of his daughters would succeed him to the throne in Poland. Shortly before Ludwig I died in 1382, he unilaterally appointed his older daughter, 12-year-old Maria, regent. But after the reign of Ludwig I, who was mostly absent and was regularly represented by regents in Poland, Poland did not agree with a head of state who was absent again and again. In addition, there was strong resistance from the Polish nobility to the 14-year-old fiancé of Mary, Sigismund von Luxemburg .

As a result, there was almost a civil war, as the nobility of Wielkopolska supported the older daughter Maria and urged her to take power, while another group of nobility in Sieradz supported the Piast Duke Ziemowit IV of Mazovia (* 1353/56; † 1426 ) elected king while the barons of Lesser Poland tried to reach a compromise. Only after a long dispute did Jasko von Teczyn, the castellan of Wójnik, mediate at a second meeting in Sieradz at the end of 1383 that an agreement was reached, according to which it was not Maria, but the younger daughter Hedwig, who lived with Duke Wilhelm of Austria (* around 1370 , † 1406) was engaged to be elected ruler of Poland. This, however, on the condition that the union with Hungary would end. Maria should receive the royal crown of Hungary for this. Nevertheless, there was still bloody fighting with the representatives of the defeated candidates for the throne in 1384.

Hedwig then came to Cracow and was crowned “King” of Poland on October 15, 1384 at the age of 11 as Jadwiga. Her engagement with Duke Wilhelm of Austria was after the approval of Pope Boniface IX. dissolved for compensation of 200,000 florins .

Two years later, as part of the Union of Krewo , the Queen was married to the Lithuanian Grand Duke Jogaila in order to forge a political alliance that was more favorable to Poland . The marriage to Wilhelm, on the other hand, would have extended the power of the then emerging Habsburgs to East Central Europe . Although they accepted the huge compensation, they still felt snubbed. This process meant that for centuries the Habsburgs prevented the beatification and canonization of Hedwig sought by Poland. Vienna argued that the Archbishop of Gran entered into a marriage, the so-called sponsalia de futuro , between the two children as early as 1378 , while Krakow argued that according to canon law, the marriage is not legally binding as long as it is not carried out in adulthood.

At this time the Teutonic Order was at the height of its power development and threatened both the Grand Duchy of Lithuania and the Kingdom of Poland with its urge to expand in the Baltic States . As early as 1308, the order annexed the Duchy of Pomerania . This cut off Poland from the trade routes along the Baltic Sea , which led to the war between Poland and the order in 1330. The dispute ended in 1343 with the treaty of Kalisch and the Polish renunciation of Pomeranels and the Kulmerland , which in Poland remained unforgotten as a humiliation. In order to enable Hedwig to connect with Jogaila, he was baptized and the Lithuanian heartland, which had remained pagan , was Christianized . So the Lithuanian empire, in which actually more Christian Orthodox Ruthenians lived than Lithuanians , was united in personal union with the Polish crown. With the Christianization of Lithuania, the religious state was deprived of the ideological basis for its crusades against the Lithuanian pagans . With the Union of Poland-Lithuania, the Teutonic Order also became a powerful enemy.

After initially resisting the marriage to the much older Jogaila, the 13-year-old queen submitted to the raison d'être . Nevertheless, this marriage was considered harmonious, even if it remained childless for a long time. In March 1386 Hedwig was crowned again together with Jogaila - now called Władysław II Jagiełło. Thus two legally equal and married rulers shared power over Poland-Lithuania .

After her marriage, Hedwig devoted herself to caring for the poor and the elderly, which made her very popular with the people. To this day, many legends are told on this subject. The young queen was also very religiously and musically gifted, spoke several languages ​​and was very educated for her time: she had been prepared for her prominent role from an early age. She was very tall (approx. 180 cm), probably dark blonde and was considered particularly graceful and elegant. 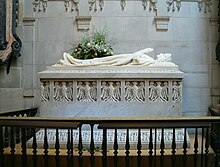 High grave of St. Hedwig in the royal cathedral on the Wawel .

Hedwig died on July 17, 1399 in childbed after the birth of her first child, who also did not survive. Jogaila remained as sole ruler on the Polish throne and thus became the progenitor of the Jagiellonian kings . He was followed by his sons from a later marriage.

In her will, the Queen bequeathed her private fortune to the Kraków Academy, which was founded in 1364 (today the Jagiellonian University), one of the oldest in Europe .

Queen Hedwig is very present in the Polish national consciousness and remains unforgotten to this day, after more than 600 years. She rests in the nave of the Wawel Cathedral in Krakow. Beatified on August 8, 1986 , she was canonized on June 8, 1997 by Pope John Paul II in Krakow.

No contemporary illustration of Hedwig has survived. When she was transferred in 1887, however, her skeleton and skull were thoroughly examined by three forensic doctors. The present painter Jan Matejko made numerous sketches on the basis of which he then drew a portrait of Hedwig. Re-examination of the royal remains in 1949 confirmed these results.