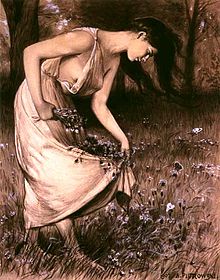 "Lurking in the Fog" (Polish: "Czaty we mgle"), oil on canvas

Antoni Adam Piotrowski , also Антони Пьотровски or Antoni Pyotrovski (born September 7, 1853 in Nietulisko Duże , † December 12, 1924 in Warsaw ) was a Polish painter and draftsman. He is counted among the artists of romanticism and realism . Because of his numerous stays as a correspondent and draftsman in Bulgaria in the late 19th century, he is considered a chronicler of the country at this time.

Piotrowski's father worked as a civil servant in a steel factory in Nietulisko. From 1869 his son learned painting with Wojciech Gerson . From 1875 he was taught in Munich by Wilhelm Lindenschmit and then he studied under Jan Matejko at the Academy of Fine Arts in Krakow until 1879 . In the meantime, he shared a studio with other Polish painters (e.g. Stanisław Witkiewicz , Albert Chmielowski , Józef Chełmoński ) in the Warsaw Hotel Europejski .

Piotrowski probably went to Bulgaria for the first time in 1879, from there to work as a correspondent and draftsman for the English magazines The Graphic and The Illustrated London News as well as the French magazines Illustration and Le Monde Illustré . He then moved to Paris until 1885, when he returned to Bulgaria to take part in the Serbian-Bulgarian War as a volunteer on the Bulgarian side until 1886 . He was awarded the Bulgarian Military Order for Valor .

During his time in the Bulgarian Army, he painted a series of nine battle paintings, all of which were later acquired by the Bulgarian state and are now exhibited in the National Military Museum of Bulgaria in Sofia . These paintings include the depiction of the battle of Slivnitsa , the storming of Zaribrod and the Bulgarian invasion of Pirot . During this time, other war drawings by Piotrowski were published in various European newspapers and magazines.

After 1879 a portrait of the first Bulgarian prince Alexander I (from the Battenberg family) was created. Commissioned by Prince Ferdinand I (from the House of Saxe-Coburg and Gotha) who followed him, he made his portrait in 1888, for which he was awarded the Order of Merit for Civilians.

“The Batak Massacar”, oil on canvas

Piotrowski returned to Bulgaria again in 1888 to visit the city of Batak . As a result, the epic painting The Batak Massacre was created in 1892 . In preparation for making the painting, he had scenes with amateur actors re-enacted and photographed. The picture was awarded at the International Fair in Plovdiv in 1892.

An exhibition and conference planned for spring 2007 , which examined the use of the media (including the picture of Piotrowski) to instrumentalize the massacre, which led to the formation of a national myth, triggered a media scandal in Bulgaria. Piotrowski's picture was examined from the point of view of art history by the art historian Martina Baleva, disregarding the eyewitness reports of the few survivors, and exposed as propaganda. In Bulgaria, some circles feared that this would jeopardize the Ottoman massacre and the project was viewed as a provocation. The Bulgarian daily newspapers of the German WAZ media group in particular boosted the mood. The socialist government of Bulgaria accused those responsible of denial and provocation of the Bulgarian people. According to the director of the Bulgarian National Museum Boschidar Dimitrov , the meeting and conference had been paid for by the Turks in order to belittle the period of Ottoman rule and to gloss over it.

Piotrowski was a founding member of Towarzystwo Artystów Polskich "Sztuka" in 1897 ; as early as 1891 he and Jacek Malczewski had developed the first ideas for an association of Polish modern artists . In 1900 the artist moved to Warsaw. In 1905 he went to Manchuria as a war correspondent . 1925 - a year after his death - was a posthumous exhibition him of his complete works in Warsaw's Zachęta National Art Gallery dedicated.

He mainly painted genre and history pictures as well as portraits. His most important works include "The March of the Recruits" (Polish: "Pochód rekrutów"), the cycle of pictures on the Serbian-Bulgarian war, the massacre painting, the pictures "Nymphs and Satyrs" (Polish: "Nimfy i Satyry") ) and the portraits of the two Bulgarian rulers.