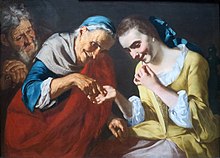 Gaspare Traversi : The Fortune Teller , around 1750 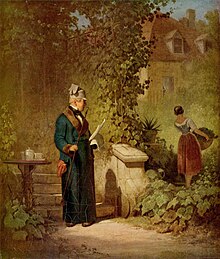 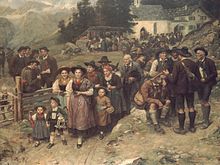 A genre picture (French: tableau de genre ; from Latin: genus 'type', 'gender'; outdated: moral image ; corresponding to moral painting for the term genre painting ) is the painted depiction of an everyday scene - for example groups of people, scenes and actions - as a description of the way of life of a people and their scenic, work or living environment.

A clear demarcation from portrait or group portrait is not always possible. While this mostly shows identifiable people, the figures in genre painting are anonymous and are characterized by their surroundings; the interior is often in the foreground.

Sometimes the transition to landscape painting is fluid, especially in the Romantic era . In Spain and Latin America, 19th century genre painting is also known as costumbrismo .

Genre scenes were painted in ancient times. You can find z. B. on Greek vases or frescoes in Pompeii . In the Middle Ages they were replaced by representations of moral and allegorical content. The forerunners of more recent genre painting were in particular the genre-like scenes in the monthly pictures , especially in the Flemish books of hours of the 15th century. But also old masters such as Pieter and Jan Bruegel the Elder. Ä. and Lucas von Leyden created paintings with typical peasant and family scenes as early as the 16th century. The focus was on the representation of drastic negative examples of human behavior such as drunkenness, quarrels or pimping. Genre painting reached its peak after a decisive change towards the reflection of the values ​​of the upper classes in Dutch and Belgian painting of the 17th and 18th centuries. Since then, the moral appeals only reveal themselves to the viewer through a hidden meaning. Jan Vermeer also created genre paintings at this time .

Earlier research approaches often interpreted the portrayals of the so-called Gouden Eeuw as snapshots of everyday life, to which they attached the value of a cultural and historical testimony. Since the 1970s, however, it has been increasingly possible to decipher the iconographic context. It became clear that the genre images depict an everyday scene as an example, but behind which a deeper message is almost always hidden. Accordingly, in the sense of the popular imagery of the Baroque era , they are usually to be understood as allegories , sometimes with complex, ambiguous statements.

Many supposed everyday scenes have their basis rather in popular comic plays or proverbs and are therefore often - if not always - narrative in character. An Italian genre painter, the Neapolitan Gaspare Traversi , for example, created his pictures parallel to the development and heyday of the opera buffa napolitana around the middle of the 18th century, in which the everyday life of the lower social milieu was exposed to ridicule through unmasking situations. This sent a moral message to the audience. Most genre pictures are also didactic because they have a strong moral content. The representation of negative behaviors should deter and encourage better behavior and positive examples should give the viewer an incentive to imitate. Of course, the visually entertaining value of the pictures cannot be denied. Due to the doctrinal and moralizing interpretive approaches inherent in the pictures, their owners were able to emphasize their cultural background. The clients for this type of art therefore came exclusively from the bourgeois-secular milieu.

In the first half of the 19th century ( Biedermeier ) the genre image revived as a " social tendency image ", especially through the Düsseldorf School of Painting , especially in connection with a stronger turn to realism , for example with Johann Peter Hasenclever . After 1848, artists such as Ludwig Knaus , Benjamin Vautier and Franz von Defregger represented genre painting in Germany that was related to the literary movement of the bourgeois realism of the time. The genre painting of those decades can be seen as a pioneer of modern art movements such as impressionism . A rapidly growing number of buyers interested in art, especially from middle-class households, fulfilled their wish for their own work of art on the wall. In particular, rural country life, which had come into fashion in the wake of increasing travel activity, was shown in medium-sized formats, and in the USA, too. In art metropolises like Berlin, Düsseldorf and Munich, painters from all over Europe gathered in large numbers to earn a living with genre painting. Among the best-known genre painters, whose works were also distributed in monthly magazines, were representatives of the Munich School such as Franz Defregger , Rudolf Epp , Nikolaus Gysis and Hermann von Kaulbach . 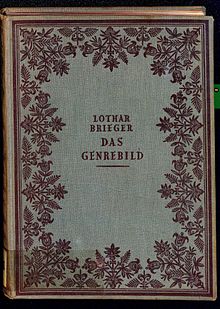