The Battle of Issus , Louvre , Paris

Jan Brueghel the Elder traveled early on. Ä. via Cologne to Italy , where he can be traced back to Milan and Rome from 1590 to 1595 . In Rome he made friends with the landscape painter Paul Bril . Like him, he worked fruitfully and shared the work with Johannes Rottenhammer , who composed the figurative elements - religious, mythological scenes, putti - into the depictions. After Jan Brueghel the Elder Ä. After returning to Flanders , he was accepted into the Antwerp painters' guild, the Sint-Lucasgilde , in 1597 as the master 's son . He married on January 23, 1599; in this marriage the first son was born on September 13, 1601, the later also successful painter Jan Brueghel the Younger .

Jan Brueghel the Elder Ä. was appointed dean of the Sint-Lucasgilde in 1601/1602 , made a trip to Prague in 1604 and then worked many times for the Brussels court of the archducal governor couple Albrecht and Isabella , where it is documented for the first time in 1606.

Jan Brueghel the Elder Ä. died of cholera in 1625 ; in the same month three of his children (Pieter, Elisabeth and Maria) fell victim to the disease.

To the works of Jan Brueghel the Elder Ä. count numerous landscape paintings of impressive quality, mostly with small staffage figures, which animate the extensive landscape scenery, and which can also depict biblical or historical scenes . He is also famous for his meticulous flower pictures, which can take the form of still lifes or flower wreaths. He also painted numerous mythological paintings and allegories , e.g. B. The Four Elements or The Five Senses (1617–1618, in collaboration with Rubens ).

He also painted two other pictures with Rubens, and he also painted with Sebastian Vrancx from Antwerp and Johannes Rottenhammer from southern Germany.

Although he comes from a family of artists, he did not include his first name in the signature. 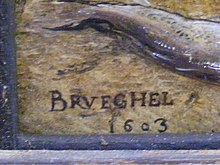 Signature of the painting Großer Fischmarkt

His works are exhibited in several art museums and galleries, such as the Alte Pinakothek in Munich and the Pinacoteca Ambrosiana in Milan.

The painting Country Road with Farmer's Wagon and Cows was stolen from the exhibition in Schloss Friedenstein during an art theft in Gotha in 1979 and has since been considered lost. On December 6, 2019, it was announced that the painting may have surfaced again and has been in the care of the Staatliche Museen zu Berlin since September 2019 , where it will be authenticated by the Rathgen research laboratory .