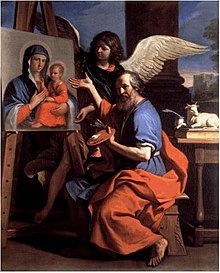 Luke guilds were the guild-like brotherhoods z. B. by painters , carvers and book printers , who were educated especially in Italy, on the Lower Rhine and in the Netherlands since the 15th century . They were named after the evangelist Luke , the patron saint of painters .

In some cities, a large number of artistic professions were represented in this guild (e.g. in Antwerp ) or it was just the painters' association with strictly regulated access, while carvers and glaziers, masons or printers founded other guilds under the protection of other patrons (e.g. in Brussels ). To join the guild, it was often necessary to acquire citizenship of the city and sometimes land. When enrolling as a master, which was a prerequisite for access to higher political and economic guild offices, marriage was also a prerequisite.

The membership of the painters in the guild offered the artists more security in a time of economic volatility. It guaranteed the promotion of local artists by excluding competition and offered the opportunity to open a workshop with apprentices who were not allowed to sign their own works, but whose paintings then automatically passed into the possession of the teacher. Another advantage was the right of the guild member to sell his works on the public art market . In Antwerp and other cities in the south of the Netherlands, the guild maintained a quality control over its members by marking the finished works of art with a stamping iron. These quality assurance measures promised buyers across Europe the same quality of art production in Antwerp.

In addition, the guild offered a certain social security, for example in emergencies or illness or in the guardianship of orphans and widows of deceased members. Religious matters were sometimes entrusted to the guild in the event of the member's death and burial and the necessary afterlife. The altar of the Guild of Luke in Antwerp was in the Church of St. Jacob, in which some of the painters ( Hendrik van Wueluwe or Peter Paul Rubens ) were also buried. The fraternity of guild members based at the guild churches or chapels was often the outward expression of togetherness and a strong instrument of social and political influence. From 1473 the Ulm school had its own winged altar in the church of St. Michael zu den Wengen . 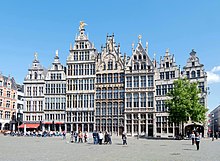 Art Nouveau membership card for the architect and painter Lode van der Linden , chairman of the Guild of St. Luke in Antwerp from 1910 to 1912 (1908)

Members of the Antwerp Guild were (with year of admission): 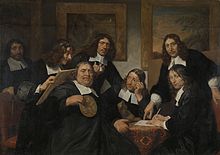 The existence of a painters' guild in Haarlem was first established in 1496, at that time still under the patronage of St. Eligius , proven. The oldest surviving statutes date from 1514.