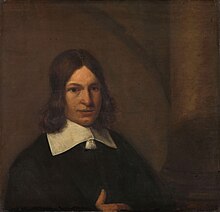 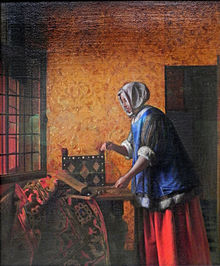 Pieter de Hooch (christened on 20th December 1629 in Rotterdam , buried on 24. March 1684 in Amsterdam ) was a Dutch painter of the Baroque . His work fell during the Golden Age , when the Netherlands experienced a cultural heyday.

On December 20, 1629, Pieter de Hooch was baptized in the Reformed Church in Rotterdam. He came from a family that had no artistic tradition. Hendrick Hendricksz de Hooch, his father, was a bricklayer . The mother, Annetge Pieters, was a midwife . Pieter de Hooch was the oldest of the family's five children, the other four of whom died early.

De Hooch's apprenticeship is not clearly assigned. According to Arnold Houbraken , Pieter de Hooch and Jacob Ochtervelt were pupils of Nicolaes Berchem , a landscape painter from Haarlem, from around 1645 to 1647 . However, there are no stylistic influences of this teacher in his work. On the other hand, Fleischer was of the opinion that De Hooch had learned from Ludolf de Jongh in Rotterdam. This possibility seems likely in view of the stylistic similarities between De Hooch's early work and paintings by de Jongh. Pieter de Hooch continued his education under the influence of Carel Fabritius and Rembrandt .

Pieter de Hooch moved to Delft . The exact time is not known, it was first mentioned in Delft in 1652, when he and Hendrick van der Burch witnessed the opening of a will . In 1655 De Hooch was accepted into the Delft painters' guild . Van der Burch was a student Pieter de Hooch and was also his brother , as de Hooch Jannetge van der Burch married . The main buyer of De Hooch's pictures was Justus de la Grange , a wealthy Delft merchant who owned at least eleven of his paintings in 1655.

In 1660 or 1661 De Hooch moved to Amsterdam . In 1661 his daughter Diewertje, who was one of his seven children, was baptized there. Despite having rich customers, Pieter de Hooch probably lived in a poor district in his first years in Amsterdam. He only moved to a better part of the city in 1668, but was never wealthy enough to buy his own house. Little is known about the last years of Pieter de Hooch's life. He was admitted to the dolhuys , the urban madhouse . On March 24, 1684, he was finally buried in the Sint-Anthonis-Kerkhof .

Pieter de Hooch's works belong to genre painting and often achieved high prices. He often painted scenes in the interiors of Dutch town houses, primarily dealing with light . He mostly limited himself to figures that he showed during quiet activities. De Hooch often depicted two or more connected rooms with a realistic treatment of perspective .

The important artist biographer Arnold Houbraken had little information about Pieter de Hooch in 1719. He judges him as "excellent at painting interiors, and has been in small groups of men and women". Nevertheless, like Jan Vermeer , Houbraken did not include De Hooch in his list of the best artists of the 17th century .

The painting The Reading Woman in the possession of the Alte Pinakothek in Munich was wrongly assigned to Pieter de Hooch. However, it comes from Pieter Janssens Elinga . 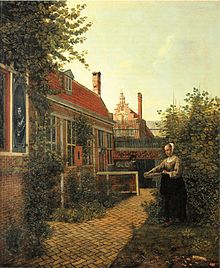 Woman with a bean basket in a vegetable garden , around 1660, Kunstmuseum Basel 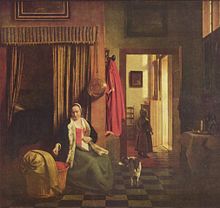 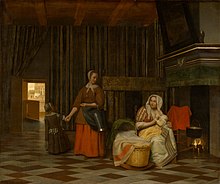 Woman with child and maid , around 1663/1665, Kunsthistorisches Museum , Vienna