The Museum of Fine Arts Leipzig (abbreviated MdbK ; colloquially picture museum ) in Leipzig is a German art museum . It was set up in 1848 as an initiative of the citizens, initially in the Leipzig Citizens School as a first interim. After a further interim period from 1945 to 2003, the museum holdings have been in the new museum building on Katharinenstrasse since 2004. With over 10,000 m² of exhibition space, it is one of the largest and, with more than 35 exhibitions annually, one of the most active exhibition houses in Germany. The city of Leipzig is responsible for the museum.

The museum with the Mende fountain on Augustusplatz in Leipzig, approx. 1890–1900

The museum goes back to the establishment of the Leipziger Kunstverein by Leipzig art collectors and sponsors in 1837, who had set themselves the goal of establishing an art museum. On December 10, 1848, the association was able to open the “Städtisches Museum” in the First Citizens' School on the Moritzbastei , in which around one hundred collected and donated works of predominantly contemporary art were exhibited.

Donations from Maximilian Speck von Sternburg , Alfred Thieme and Adolf Heinrich Schletter, among others , meant that the collection should grow over time. In 1853, the merchant and art collector Adolf Heinrich Schletter transferred his collection to the city on the condition that a separate building be erected for the city museum within five years. Shortly before the deadline, the museum building, financed by a foundation, was inaugurated on December 18, 1858. The building on Augustusplatz (today the Neue Gewandhaus is located in the same place ) was designed by Ludwig Lange in the style of the Italian Renaissance . From 1880 to 1886, the building had to be expanded by Hugo Licht to accommodate the constantly growing collection . At the beginning of the 20th century, Fritz von Harck donated part of his collection to the museum.

In 1937 the National Socialists confiscated 394 paintings and graphics, mainly Expressionism, as part of the “ Degenerate Art ” propaganda campaign . In 1941, mature plans were made for a further extension to the south into the adjacent Lenné Park and redevelopment plans. Already in the Weimar period, the management at that time pushed for modernization: there was a lack of electric light, sewers and air conditioning. Gas lamps soot the rooms, and the pictures were troubled by temperature fluctuations in winter / summer as well as water ingress through leaky zinc roofs. On the night of December 4, 1943, the building was destroyed by a British air raid. A large part of the holdings had previously been brought to safety in the Leipzig area and in Leipzig itself.

The interim in the former Reichsbank 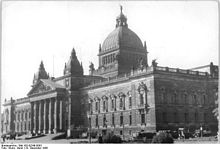 From 1848 to 1858, the Leipzig Citizens School was the first interim of the MdbK. After the destruction of the first real museum building on Augustusplatz, a 61-year history of various temporary arrangements began for the museum. After, as the sources show, part of the preserved collections had moved to the premises of the former Reichsbank in Petersstrasse in 1945 , the management at that time changed due to the ownership rights to the Reichsbank building through the emerging Sächsische Landesbank (issuing bank / Girobank Sachsen) and the resulting bank Problems due to unsuccessful rental contracts 1947–1951 and after consultation with the administrative management of the former Reichsgericht in 1952 in the building of the former Reichsgericht .

The second interim in the former Reichsbank was accompanied by disputes about the lease that had not been concluded. The affixing of doorbell signs and a museum lettering on the facade as well as the implementation of museum-typical security measures was also a point of contention between the parties to the dispute, the City Council of Leipzig, Lord Mayor, Museum Directorate on the one hand and the Saxon State Bank on the other. Only about 400 to 800 visitors came to the temporary facility every month. Between 1945 and 1951/52 the MdbK moved into rooms on the 1st floor, 2nd floor and the attic, which, however, had to be expanded in order to be usable for museum and administrative purposes. The basement and parts of the ground floor were still used by the Saxon issuing bank / giro bank. The bank's vault was also in the basement.

In July 1949, director Prof. Johannes Jahn, together with the chief curator of the MdbK and an employee of the city building department, examined the attic of the former Reichsbank building in order to achieve any expansion. The roof turned out to be partially leaky. The solid ceiling also had a slope towards the middle, so that it was always too damp in the attic. The roof drainage was done by means of a wooden gutter built into the attic, which was led from the attic through an open skylight. In the course of this, MdbK management and the building construction department dealt with conversion plans and the financing of the roof conversion. It was also about the realization of the former roof glazing. The cost estimates turned out to be more expensive than expected because the condition of the upper two floors, especially the top floor, was more than poor. Meanwhile, the Sächsische Landeskreditbank, which has since emerged from the Sächsische Landesbank, set a deadline of July 25, 1949 for the former bank director's apartment and the entire first floor to be vacated by the MdbK and offered the upper two floors for use by the MdbK.

In the period between 1945 and 1951, the administration threatened to fall apart, because the library was in the meantime forced to work in July 1949 because of the quarrels with the Sächsische Landesbank, which took up more and more rooms in the former Reichsbank building and thus made museum and administrative operations more difficult to move into the House of People's Solidarity in the Brenninkmeyerhaus for a short time. However, this alternative turned out to be too expensive, so the search for alternatives continued. During this time there were also other locations, including a. a bank building on Tröndlinring, the Merkurhaus and the exchange center in Hainstrasse, wanted and discussed in public. It was also about tearing the collections apart in different houses. The management at that time opposed this and, without the knowledge of the City Council of Leipzig about the process, forced the use of the former imperial court building and presented the city administration and the mayor with a fait accompli. The decision of the management was welcomed politically and socially. The mayor of Leipzig at the time, Erich Zeigner , also intervened in the dispute and tried, as can also be seen from relevant sources, to persuade the Saxon state government to give in with a letter dated July 11, 1947 and threatened to do so in a letter of August 15, 1947 Compulsory lease in favor of the MdbK, if the Landesbank's reservations of termination in the lease that has not yet been concluded would not be in favor of the MdbK. An agreement was never reached.

After the decision to move the Federal Administrative Court to Leipzig in May 1992, the museum had to move again to an interim in the Handelshof in August 1997 . The collection could only be shown to a limited extent in the temporary arrangements.

The new building of the museum from 2004

In the mid-1990s, the city decided to give the museum its own home again. On December 4, 2004, exactly 61 years after the destruction of the Municipal Museum on Augustusplatz, the new museum building on the former Sachsenplatz was opened. The cuboid new building of the museum cost 74.5 million euros and was designed by the architects Karl Hufnagel, Peter Pütz and Michael Rafaelian. 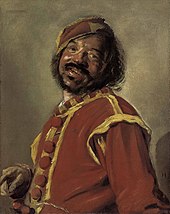 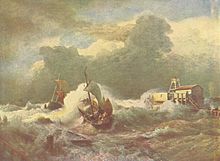 The most important parts of the collection are works by Dutch and German Old Masters such as Frans Hals and Lucas Cranach the Elder , Romantics such as Caspar David Friedrich and representatives of the Düsseldorf School of Painting such as Andreas Achenbach . The Beethoven sculpture by Max Klinger is part of the sculpture collection .

In the field of contemporary painting , the Museum of Fine Arts Leipzig can refer primarily to works by the Leipzig School with painters such as Bernhard Heisig , Werner Tübke and Wolfgang Mattheuer or to larger holdings of the younger generation of painters such as Neo Rauch and Daniel Richter .

The museum will continue to rely on donations and permanent loans to expand its holdings in the future . The tradition of generous foundations that began in the 19th century and which itself led to the establishment of museums has continued into the 21st century. On the occasion of the new museum building in 2004, the art collector couple Hans-Peter Bühler and Marion Bühler-Brockhaus donated 41 works by French artists, including by Jean-Baptiste Corot , Charles-François Daubigny , Jean-François Millet , Eugène Delacroix , Edgar Degas and Claude Monet , which show the art development of the 19th century from the Barbizon School to Impressionism . In the 2000s, the museum received the AutoWerke photo collection from the BMW Group , which has been culturally involved in the city since the new Leipzig plant was built . As a sign of the donation tradition , a donor mosaic created by the artist Stephan Huber is dedicated to the greatest patrons in the foyer .

Special exhibitions are regularly shown in the museum.

In addition to events for various types of school, the museum's educational offer also includes guided tours and courses in English ( Test your English ), for senior citizens and for teachers .