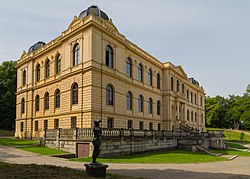 The Lindenau Museum in Altenburg ( Thuringia ), as an art history museum, houses the collections of the Saxon-Thuringian statesman, scholar and art collector Bernhard von Lindenau (1779–1854). The magnificent building, constructed by Julius Robert Enger, a student of Gottfried Semper , was completed in 1876. It is a listed building .

In 2001 the art museum was included in the Blue Book , a list of nationally important cultural institutions in East Germany, and is thus one of the so-called cultural beacons .

It has been refurbished since January 2020 and is closed.

Lindenau's collection of early Italian panel paintings is famous . With 180 works, the Lindenau Museum has the largest special collection outside of Italy, which establishes the museum's international standing. The focus is on works by masters from Siena , Florence and Umbria from the 13th to 16th centuries. There are also around 300 plaster casts of masterpieces from Greco-Roman antiquity, but also of works of art from Egypt and Mesopotamia, as well as the Italian Renaissance and Classicism .

After the Second World War, the collections were expanded under director Hanns-Conon von der Gabelentz to include European paintings from the 16th to 20th centuries and German sculptures from the 19th and 20th centuries. The museum also houses a graphic collection of around 50,000 sheets, the focus of which is on graphic portfolios from the 1920s (Alfred Hoh collection, Fürth) and on the work of Gerhard Altenbourg (1926–1989).

In 2009, with the support of the Hermann Reemtsma Foundation , the Cultural Foundation of the Länder, the State of Thuringia, other state institutions and financial institutions , the museum bought more than 100 unique works by the artist Gerhard Altenbourg worth one million euros. As a result, the museum has the largest Altenbourg collection in the world.

The replica of the Sistine Madonna was acquired again in 2014 by the Ernst von Siemens Art Foundation in Munich . Bernhard von Lindenau had the painting done by the Dresden painter Louis Castelli in 1847. It was sold with around 190 other replicas from the museum in the 1960s.

Von Lindenau amassed a collection of 400 ancient Greek-Etruscan ceramics and a historical art library, which served and serves to research his collections. Lindenau made its collections accessible to the public as early as 1848. At the same time, he started an art school, which has been running since 1971 under the name Studio Bildende Kunst to this day. The close connection between an art school and a museum is unique in Germany.

The Lindenau Museum was included in the Blue Book published in 2001. The Blue Book is a list of nationally important cultural institutions in East Germany and currently includes 23 so-called cultural lighthouses .

After a structural renovation of the building and renovation work in the exhibition rooms, the museum reopened on November 5, 2006 with the special exhibition Paris, 158 Boulevard Haussmann (50 Italian masterpieces from the Musée Jacquemart-André , Paris).

Until her retirement in 2012, Jutta Penndorf headed the museum for around thirty years. Her successor in 2012 was the art and literary historian Julia M. Nauhaus .

At the beginning of 2016, a leadership crisis in the museum was the subject of cultural reporting. As a result of the non-renewal of the contract of the successful museum director Julia Nauhaus, which can be traced back to District Administrator Michaele Sojka , four of 16 members of the board of trustees for the Gerhard Altenbourg Prize, which is awarded every two years, declared their resignation from the board of trustees in protest. The winner of the 2016 award, Miriam Cahn from Switzerland , then rejected the award. Julia Nauhaus took over the management of the Gemäldegalerie and the Kupferstichkabinett of the Academy of Fine Arts in Vienna in April 2016.

In August 2016, the museum announced in a press conference that Roland Krischke , the former press spokesman for Schloss Friedenstein in Gotha, will take over the position of director from November 2016.

The Friends of the Lindenau Museum e. V. was founded in 1994 and with more than 200 members is one of the largest in the Altenburger Land .

The museum has been awarding the Gerhard Altenbourg Prize every two years since 1998 , which is linked to an exhibition in the Lindenau Museum and prize money and is dedicated to the artist Gerhard Altenbourg.

In addition, the Bernhard von Lindenau scholarship is awarded to graduates of art schools in Central Germany .

Works in the collection

The Lindenau Museum on a postcard from 1914

Publications on the history of the collection