Museum of Ethnology in Leipzig

The Museum für Völkerkunde zu Leipzig has one of the largest ethnographic collections in Germany with over 200,000 objects . Administration, exhibitions and collections are now housed in the new Grassi Museum in Leipzig on Johannisplatz . 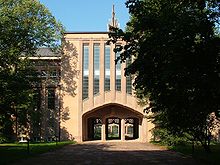 The founding charter of the museum dates back to 1869; At the same time, the Leipziger Zeitung published a call for participation in the acquisition of the cultural-historical collection of the Dresden court councilor and senior librarian Gustav Friedrich Klemm . In the following year the collection could actually be bought; it was initially housed in the building of the former chemical laboratory in Leipzig. In the following decades the inventory of objects was expanded considerably through the purchase of various collections. From 1873 to 1904 the museum was run by an association “Museum für Völkerkunde”; exhibitions were shown in various Leipzig houses. In 1895 the collection moved to the newly built old Grassi Museum on Königsplatz - today the domicile of the Leipzig City Library - which had been built for this purpose over the previous three years. In 1904 the city of Leipzig took over the administration of the museum, in 1907 Karl Weule became director. Between 1925 and 1929 the new Grassi Museum was built on Johannisplatz; In 1927 the Museum of Ethnology moved in and after the death of Karl Weule, Fritz Krause became the new director.

With the outbreak of World War II in 1939, museum operations came to a complete standstill. In 1943 the building was badly hit in air raids, with about 30,000 objects destroyed. The reconstruction of the house began in 1947 and the first permanent exhibitions were reopened in 1954. The following year Hans Damm became the new museum director; his successors were Wolfgang König (1970–1980), Lothar Stein (1980–2001) and finally Claus Deimel (since 2001). In 1981 there was a breakdown in the heating system, which brought the exhibition to a standstill for the next four years. It was not until 1985 that permanent exhibitions could be viewed again. Since 1991 the Museum für Völkerkunde zu Leipzig has been subordinate to the Saxon State Ministry for Science and Art . In 1994 a special stamp and a special letter were issued by the Deutsche Bundespost on the occasion of its 125th anniversary. The reconstruction of the Grassi Museum took place between 2000 and 2005, which involved a temporary relocation of the entire inventory. In November 2005, the first permanent exhibitions were reopened.

In 2004 the museum merged with the ethnological museums in Dresden and Herrnhut to form the State Ethnographic Collections of Saxony , which have been part of the Dresden State Art Collections since 2010 .

Overview of the collection

The Southeast Asia collection consists of around 11,000 objects, mainly from Indonesia , Thailand and Burma . The Viennese ethnologist Paul Schebesta contributed a group of 169 objects from the Semang and Senoi from the Malaysian Peninsula . Other collector names are Dr. v. Noetling (1896, extensive Burma collection), Th. Dannert (objects from the Batak culture, Sumatra ) and the Leipzig publishing dynasty Meyer ( Kalimantan and Philippines holdings ). The basis of the South Asian collection goes back to Gustav Friedrich Klemm (1802–1867).

E. Schmidt in 1890 and L. Reichhardt in 1914 brought in household items, agricultural implements and handicrafts from what is now Kerala and Tamil Nadu from southern India . Further household effects of the Sinhalese population come from the east coast and the central highlands of the former Ceylon / Sri Lanka (Eickstedt collection 1926/27). More than 100 masks of the Kolam , a folk theater tradition , also come from there (from the Freudenberg collections from 1898 and Carl Hagenbeck between 1891 and 1898).

A specialty from North Asia is a complete shaman costume of the Evenks . After the museum was lost in the Second World War, there is again a Turkmenistan collection in the Orient Collections.

The core of the Oceania collection consists of around 20,000 objects from the former German South Sea protected areas in Melanesia . Objects from Fiji from Polynesia form a focus, which was added in 1885 with the purchase of the collection of the Godeffroy Museum .

Australia has collections from the east coast of Queensland (Amalie Dietrich and Eduard Demel 1864–1872), a small collection of shields from the rainforest region of the Palmer Goldfields (19th century; collected there at the time of the beginning gold rush; Klaatsch) and the collections the area of ​​the Aranda (Arrernte) and Loritja from Central Australia (Liebler 1895–1922, cf. Carl Strehlow ) and the Tiwi collection (around 1904–1910), while a comprehensive collection of stone artifacts represents Tasmania ( Fritz Noetling , around 1900) .

Museums for ethnology in Germany

Museums in the Grassi