Model of the Circus Carl Hagenbeck 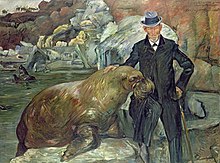 Lovis Corinth : Portrait of Carl Hagenbeck with the walrus Pallas , 1911 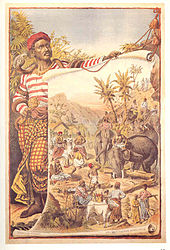 Stamp pad for the 150th birthday

His father, the fish merchant Gottfried Claes Carl Hagenbeck (1810–1887), started an animal trade in Hamburg in 1848 connected with animal shows, which Carl Hagenbeck took over in 1866 and expanded it to become the largest business of its kind in Germany. At first he sent four to five expeditions a year to Africa to catch animals, and later to the whole world. He also delivered all over the world, to the menageries of emperors and other rulers.

In 1875, Carl Hagenbeck's first Völkerschau opened based on an idea from animal painter friend Heinrich Leutemann (1824–1905). During the stay in Hagenbeck's exhibition grounds, visitors were able to watch the people of Lapland go about their everyday life. Hagenbeck's show celebrated great success. The little Lapland show moved from Hamburg to Berlin. Then she traveled to Leipzig. In order to remove the exhibitions from the environment of show booths and entertainment venues, attempts were made from now on to find reputable exhibition locations so that the shows were respected by the bourgeoisie. After the unexpected great success of Carl Hagenbeck's first Völkerschau, he quickly planned more. With the help of his connections to animal hunters all over the world, he brought three “ Nubians ” to Europe in 1876 and immediately afterwards an Eskimo family from Greenland. In 1883 and 1884 he organized a Kalmyks - and a Sinhalese - or Ceylon show. With the opening of his zoo in Stellingen in 1908 at the gates of Hamburg, Carl Hagenbeck had his own exhibition area, where Somalis , Ethiopians and Beduins performed. In the same year his Somali troop was exhibited in the Düsseldorf Zoo .

Hagenbeck opened a circus in 1887: Carl Hagenbeck's International Circus and Sinhalese Caravan, which later operated as Hagenbeck's Zoological Circus . In 1890 he introduced the tame training of wild animals and planned an open zoo without bars, for which he also acquired a patent in 1896. In the same year he performed with his animal circus at the Berlin trade fair , where he presented polar bears , seals and various birds in front of a 60-meter-deep and 25-meter-wide Arctic Ocean panorama. The circus became Circus Hagenbeck-Wallace in 1905 after it was bought up by an American circus . Carl's younger brother Wilhelm Hagenbeck (1850-1910) also ran a circus, which was later continued by Wilhelm's sons Willy (1884-1965) and Carl (1888-1949).

On May 7, 1907, in Stellingen , north of Hamburg , Hagenbeck opened the world's first gridless zoo on the basis of his patent , which still exists today as the Hagenbeck Zoo . This establishment was in competition with the zoological garden in Hamburg, which existed until 1930, and was boycotted by a majority of the German zoological gardens from 1909, from which competing animal dealers, such as the descendants of Ludwig Ruhe, profited. In 1911, Hagenbeck was portrayed by the painter Lovis Corinth together with the audience's darling at the time, the Walrus Pallas, commissioned by the Hamburger Kunsthalle , and the resulting painting Portrait of Carl Hagenbeck with the Walrus Pallas is still part of the Hamburger Kunsthalle's collection. In 1912 Hagenbeck was elected a member of the Leopoldina .

Carl Hagenbeck was buried in Hamburg in the Ohlsdorf cemetery. On his grave, in front of a boulder with the engraved names Carl, Heinrich and Lorenz Hagenbeck, lay the bronze figure of the sleeping lion Trieste, Carl Hagenbeck's favorite animal. The lion had once saved his life when Hagenbeck stumbled in the outdoor enclosure and was attacked by a tiger. The sculpture was created by Josef Pallenberg , the artist who also designed the animal sculptures for the entrance to the zoo. The bronze lion was stolen at the beginning of January 2014.

On May 5, 1994, the Deutsche Bundespost issued a block of special stamps for his 150th birthday and the 150th anniversary of the Berlin Zoo.

Since interest in zoos slowly declined around 1870, Hagenbeck took up the idea of ​​his painter friend Heinrich Leutemann and had animals from the far north accompanied by Sami . Since many onlookers came to see the "strangers", Hagenbeck produced 54 such exhibitions by 1913, in which large groups of people from traditional animal catching areas - mostly from Africa and Southeast Asia - were exhibited. The Völkerschauen were extremely successful commercially. Disproportionate to this were the low remuneration of the portrayed, who were often recruited with false promises. Black Africans, who were described as "semi-civilized" and exhibited in Völkerschauen, were treated much worse than Afro-Americans , who lived in imperial Germany, for example. B. performed as a musician. Medical care was also inadequate: an Inuit village community died of smallpox because they had forgotten to vaccinate them .

At the time of the Völkerschauen , many in Germany and Europe were of the opinion that one was entitled to exhibit “foreign” people in zoos, as Hagenbeck did on a large scale. The exhibitions were organized in such a way that they corresponded to and strengthened the stereotypical perception of the “peoples” exhibited by the white Europeans. The associated advertising media pursued the purpose of linguistically representing the “superiority” of Europeans over the cultures on display. The Völkerschauen were often given a scientific coating; as a result, Hagenbeck received honorary membership in an anthropological society.

The Völkerschauen appeared with the claim to "authentically" represent the life of the peoples depicted. During the visiting hours, the portrayed had to perform dances and rituals, which in the exhibition, however, were removed from their context in the cultures of the portrayed. In fact, the Völkerschauen conveyed an exotic image that had a decisive influence on the European perception of the foreign . Some critics of Hagenbeck and the Völkerschauen therefore take the view that the Völkerschauen had the purpose of winning the German population over to colonialism . The contents of the accompanying publication Carl Hagenbeck's illustrated animal and human world , published in hundreds of thousands of copies, were related to the colonial revisionism that was widespread in Germany after the loss of the colonies . Balthasar Staehelin, on the other hand, writes: "The colonial aspect of the Völkerschauen in the zoological gardens does not come to light in open propaganda for colonialism, but rather expresses itself in the formation of a mindset that connects zoos and non-European people in an associative and unreflected manner."

The critical whiteness research sees the Völkerschauen, which were organized by Hagenbeck and other entrepreneurs, as a particularly powerful example of racist practice in Germany during the imperial era.

After 1945 two radio play productions were made about Carl Hagenbeck. The first radio play comes from NWDR Hamburg in 1952, the second from WDR and was created in 1962.

The NWDR production was written by Robert Walter and is entitled Get us 2000 dromedaries - a memory of the great animal master Carl Hagenbeck . The focus of the plot is an event from 1902. The Colonial Ministry in Berlin commissioned Hagenbeck to procure 2,000 dromedaries for the governor of Swakopmund ( German South West Africa ) . It is told how he succeeded in equipping a huge expedition, placing it under the command of his son Lorenz, who then managed to deliver the dromedaries of East African origin before the agreed date. Among others, Carl Voscherau (Hagenbeck), Erwin Wirschaz (his son Lorenz), Georg Pahl (Menges), Heinz Ladiges (speaker), as well as Willi Essmann , Eduard Marks , Heinz Roggenkamp and Reinhold Nietschmann spoke under the direction of Hans Freundt . The radio play is no longer available in any ARD broadcasting company.