A library seal is a unique identifier for libraries and related institutions (e.g. archives and museums ). The seals are issued by central offices in many countries and are mainly used in association catalogs , for interlibrary loans and for data exchange. The international system for library sigla has been the International Standard Identifier for Libraries and Related Organizations (ISIL) according to ISO 15511 since 2003 .

ISIL and library sigla are increasingly being used as primary identifiers for libraries and related institutions. In the long term, the aim is to dispense with the Sigel and only use ISIL instead. ISIL are used, among other things, as MARC organization codes to identify institutions that act directly or indirectly as suppliers of MARC data . The German ISIL agency is also the issuing body for these codes in Germany. In addition to being clearly assigned in an international context, ISILs are also better suited for use as identifiers in Internet applications and other software systems. For example, ekz Reutlingen uses ISIL as an identifier for data coding on RFID chips. In order to be able to use ISIL as an identifier in the context of the Semantic Web , the info: isil namespace was applied for so that each ISIL can be formulated as a Uniform Resource Identifier (URI) at the same time .

Index for the resolution of property abbreviations from 1914 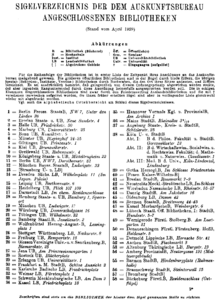 First index with addresses from 1929

Originally, library sigils were awarded at the beginning of the 20th century as part of the work on the Prussian general catalog (" Althoff System "). The system was administered under the aegis of the “Information Office of the German Libraries” at what was then the Royal Library, later the Prussian State Library, and was further developed for interlibrary loan and general journal directories.

In Germany, the German ISIL agency and seal office at the Berlin State Library awards library seals and ISIL for institutions in Germany. In addition to the ISIL and code directory online, it publishes a printed code directory every two years. The national ISIL center of the Swiss National Library is responsible for issuing the seal for Switzerland . In Austria, the conversion of the standards A 2657 and A 2656, according to which library seals ("ÖZDB-Sigel") and machine-readable identification ("BIK") are issued, to ISIL is being carried out by the Austrian Library Association . The label offices or ISIL agencies in the individual countries are registered with the ISIL Registration Authority, which is based at the Danish Agency for Libraries and Media in Copenhagen. In addition to the national ISIL agencies, there are currently three agencies that can award ISIL regardless of national affiliation: OCLC operates its own international library directory with WorldCat Registry and integrates its identifiers with the prefix OCLC into the ISIL system. The journal database assigns ISIL with the prefix ZDB for virtual collections of electronic publications (also known as "product labels"), among other things within the framework of national licenses and for foreign libraries participating in the ZDB, for which no national ISIL has yet been assigned. The Library of Congress can also assign ISIL to libraries outside the United States with the prefix M.

According to ISO 15511, an ISIL consists of three parts:

The total length of an ISIL is limited to 16 characters. ISIL agencies can further restrict the possible characters for their namespace or specify a substructure so that already existing marking systems can be partially adopted. If the substructure reflects a geographical breakdown, the standard recommends using codes from ISO 3166-2 . The ISIL agencies are free to use upper and lower case in the library identifier; the assigned identifiers must, however, be unique even without this distinction. To represent a ISIL as a Uniform Resource Identifier (URI) of the namespace was isil (Notification URI namespace 4452 RFC pending).

Based on a numbering of the Prussian libraries, different forms of library sigla developed:

While these forms served their purpose well for everyday library work, using them as identifiers in databases is problematic, since the structure of a library sigla is not as formally defined as that of an ISIL and special characters such as spaces, slashes and umlauts are possible. There is a heuristic for mapping a seal to an ISIL ; to be on the safe side, however, it is better to look up the list of codes, as deviations are possible in individual cases.