The library has the legal mandate to collect, catalog, preserve and mediate all publications that appear in Switzerland , relate to Switzerland or to persons with Swiss citizenship or residence or created by Swiss authors or authors associated with Switzerland or be co-designed, regardless of the language. The Swiss National Library is the first point of contact for Helvetica . Since 1992, this has not only affected printed works, but also other information carriers. The NL also collects publications from international organizations that have their headquarters in Switzerland (e.g. UN , WHO etc.) or that have contractually designated the NL to be the depositary in Switzerland.

The National Library currently has a stock of 5.6 million media, it has 120 full-time positions and its 2008 budget was around 32 million francs.

The then national library was initiated by the Zurich dialectologist and librarian Friedrich Staub in 1891. In 1894 the Council of States and the National Council approved the federal resolution on the establishment of a Swiss national library . In 1895 this began its activity. Moving to new premises in 1899 enabled the library to open the collections to the public. In 1901 the Bibliographical Bulletin of the Swiss National Library appeared for the first time , which was published by the Swiss National Library due to its new additions. In the first years of its existence, alongside monographs and periodicals , manuscripts , graphic sheets and photographs were also collected.

In 1911 the federal law on the Swiss national library was published in the Federal Gazette of the Swiss Confederation . In 1915, the Swiss National Library reached an agreement with the Swiss publishers in which they guaranteed the library a free copy of every published title. The Swiss General Catalog was launched in 1928, and 60 years later, in 1991, the Swiss Literature Archive (SLA) , which was created at the suggestion of Friedrich Dürrenmatt , was inaugurated. In addition to Dürrenmatt's estate, the state library's manuscript collection formed the basis of the SLA. Since it was founded, it has been collecting literary legacies from all four language regions and has been collecting selected publishing archives since 2011.

In 1993 the Swiss National Library introduced the first electronic catalog to be computerized with the library software from VTLS, and one year later, in 1994, it made the Helveticat online catalog publicly available. In 1995 the Swiss National Library participated in the founding of Memoriav , the association for the preservation of Switzerland's audiovisual cultural property. In 2000 the newly established Center Dürrenmatt Neuchâtel (CDN) was affiliated.

In 2003 the website SwissInfoDesk , an annotated list of relevant links on Swiss topics, went online. Four years later, in 2005, the Swiss National Library started the project Virtual Information about Switzerland , a partnership between libraries in Switzerland and abroad that are ready to answer questions from the public in their respective subject area, which the partner libraries each other hand off.

In 2007 the library was given its current name. In 2008 the online archive database HelveticArchives was activated, which makes the collections of the Swiss Literature Archive and the Graphic Collection accessible. The electronic collections, the so-called eHelvetica , have also been accessible for research since 2011 . The 2012–2019 strategy of the Swiss National Library is under the motto The future is digital. But the paper remains . In doing so, she adjusts to the new social developments, but at the same time continues her traditional tasks. 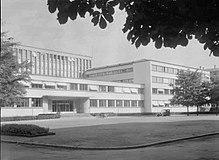 The new building around 1936

The main entrance with the former name "Swiss National Library"

A project for a Swiss national library was drafted as early as the time of the Helvetic Republic around 1800, but could not be implemented. The first location in 1895 was a four-room apartment without electrical lighting and without a telephone connection at Christoffelgasse 7 in Bern. In 1899 the company moved to the building of the Federal Archives and in 1931 to the current address at Hallwylstrasse 15 in Bern's Kirchenfeld district .

After a nationwide competition in 1927 , a new building was built at this location from 1929 to 1931 according to the plans of the architects Oeschger , Kaufmann and Hostettler , which, as an early representative of modern architecture ("New Building"), is now a listed building. The individual parts of the building are clearly separated from one another in the sense of functionalism.

The eight-storey book store, consistently designed as a high-rise building and built on the 1.52 m extension grid, which at the same time corresponds to the center distance of the shelves and the window axes, forms the backbone of the building, as it were, the attached administration wings complement the figure to a kind of courtyard that looks onto the opposite high school responds. In the middle is the skylight-lit reading room , which is moved into the actual center of the facility. Between 1994 and 1997 a new book magazine, consisting of seven underground floors, was built. In 2001 the library moved back to its old premises after they had been significantly renovated and enlarged through construction work. A second underground magazine was opened in 2009. This consists of four floors. The Center Dürrenmatt Neuchâtel (CDN), which opened in Neuchâtel in 2000 and was converted from Dürrenmatt's private house according to plans by Mario Botta , also belongs to the Swiss National Library .

In contrast to other countries such as Germany or France, the submission of a deposit copy is not legally anchored in Switzerland. The NL has reached an agreement with the Swiss Association of Booksellers and Publishers (SBVV) and the Société des Libraires et Éditeurs de la Suisse romande (SLESR, now ASDEL) to provide a free copy. Swiss associations, companies and other corporations as well as Swiss authors are required to provide the NL with a copy of their publications that appear outside the publishing and book trade (so-called "gray literature").

The Swiss National Library is a mixture of a lending and reference library . Media that are very valuable or older than 50 years may only be used in the reading room . The library, which opened in 1900, is free for all users. Anyone who is of legal age and has a permanent residence in Switzerland can be registered.

The library has been offering its various research services under the name SwissInfoDesk since 2003 . For independent searches, she has compiled a list of relevant links on the subject of Switzerland, which is continuously supplemented and updated.

Helveticat is the NL's online catalog (OPAC). In Helveticat are detected all monographs, music , microforms, multimedia , maps and atlases , however, only part of the newspapers and magazines that are in the NL. Helveticat also contains entries on audio files from the Swiss National Sound Archives (FN) in Lugano. The oldest printed book recorded in Helveticat dates from 1465. Subject indexing has only been carried out in Helveticat since 1998 .

The complete directory of Swiss memory institutions is also integrated in HelveticArchives under the name ISplus . ISplus also serves as the Swiss ISIL directory. The repertory of the handwritten legacies in archives and libraries in Switzerland is also integrated .

Further online finding aids of the NL are the Swiss poster collection , the Swiss general journal catalog RP / VZ (no longer updated since mid-2002 and replaced by the Swiss journal portal ZSP), the Swiss national bibliography Das Schweizer Buch and the database of the specialist bibliography on Swiss history .