National Library of the Czech Republic 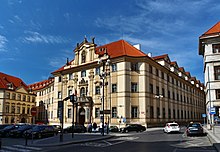 The National Library of the Czech Republic ( Czech Národní knihovna České republiky , NK ČR) in Prague is the central and leading library of the Czech Republic . It is subject to the Ministry of Culture. As the largest and one of the oldest Czech libraries, it has a collection of over seven million documents with an annual increase of around 88,000 titles. The library is housed in the Clementinum in Prague's Old Town and in the central warehouse in the Hostivař district.

In addition to some branch libraries of Prague University , the Studium generale school was established in the Dominican monastery in Prague's old town in the 13th century , and in the 14th century it merged with the university. In 1556 monks of the Jesuit order built a boarding school called Clementinum on the remains of the monastery. In 1622 Charles University came under the administration of the Jesuits and all libraries were housed in the Clementinum.

After 1918 the library came under state control of the new Czechoslovakia . In 1924 the Slovanská knihovna (Slavic Library) was founded, which was also housed in the Clementinum in 1929 and is an autonomous part of the National Library to this day.

In 1935 the library was renamed Národní a univerzitní knihovna (National and University Library), at the same time the law on legal deposit was passed. After the Czech universities were closed after the occupation by the Wehrmacht in 1939 , the library under the name Zemská a univerzitní knihovna (State and University Library) remained in operation until 1941. In 1958, several libraries in Prague were merged into one large Státní knihovna ČSR (State Library of the ČSR). In 1990 it was finally given the current name Národní knihovna (National Library).

The library's holdings are recorded in the electronic catalog and can be viewed.

Problems with lack of space

After 1989 the library began to address the critical shortage of storage space. In 1996 the central depot in the Prague district of Hostivař was completed and put into operation. However, since its capacities are not unlimited, the construction of a new building was considered. On May 16, 2006, an international architectural competition was announced for the design of such a new national library building in the open space of Letná Park. The results of the competition were announced on March 3, 2007, from which the architect Jan Kaplický from the Future Systems architecture office emerged as the clear winner. According to this draft, the National Library was originally due to be completed in 2012. However, due to disputes about the fairness of the architectural competition, the planned building plot and the financing of the library, there were delays in implementation. In July 2008, the Czech Minister of Culture Václav Jehlička declared that the library would not be built.