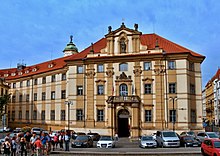 The Clementinum (east side)

The Clementinum (Czech Klementinum ) was a Jesuit college in Prague . The extensive baroque building is located directly on the Charles Bridge (or its Old Town Bridge Tower ) in the old town . Today it houses the Czech National Library as well as several scientific institutes. The building complex has been listed as the National Cultural Monument of the Czech Republic since November 15, 1995 . 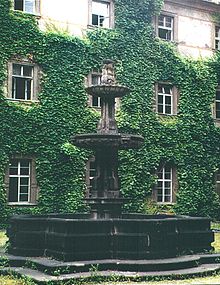 Fountain in the vineyard of the Prague Clementinum, Francesco della Torre u. Giovanni Battista Passerini , 1676 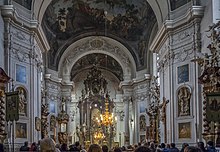 The Jesuit order came to Prague in 1556 at the invitation of Emperor Ferdinand . The Jesuits received an empty, dilapidated, former Dominican monastery from the emperor , in which they were supposed to build a university to compete with the utraquist Charles University . The Clementinum received university rights as early as 1562.

In the first few decades the Prague Jesuits suffered from constant financial difficulties. Students and teachers lived under very simple conditions in the dilapidated monastery. With the onset of the Counter Reformation in Bohemia, the order received more donations at the end of the 16th century and was able to carry out restoration work and erect the first new buildings.

1653–1726, the Jesuits built the large baroque-style building complex that has been preserved to this day and used it as a student residence and teaching facility . The area of ​​the Clementinum is about 2 hectares. These include the publicly accessible sacred buildings of St. Clement's Church, Salvatorkirche , the Mirror Chapel and the Chapel of the Assumption, as well as the baroque library and the astronomical tower , which can also be visited. In the observatory mainly time and position observations were carried out.

From 1752 meteorological measurements were made and from 1775 daily weather observations were recorded. In 1751 a mathematics museum was opened, the first director of which was Joseph Stepling . After the dissolution of the order, the mathematical museum continued work on the observatory, which in 1953 formed the cornerstone for the Astronomical Institute of the Science Academy.

With the abolition of the Jesuit order in 1773, the Clementinum came into state hands. The Bohemian Queen Maria Theresa let the observatory continue to operate, built the national library in 1781, to which the old book holdings were transferred, and handed over parts of the building to the university for use.

The oldest Mozart memorial in the world, the so-called Mozarteum, was built in the Clementinum in 1837 and is part of the music library.

Today the Clementinum is the seat of the Národní knihovna České republiky , the national library of the Czech Republic. It also houses the Astronomical Institute of the Academy of Sciences of the Czech Republic . Due to its location, which is at great risk from the floods of the Vltava, there are currently plans to relocate the national library to the Letná Plateau. Jan Kaplicky's competition design , an example of blob architecture , is still under intense discussion.