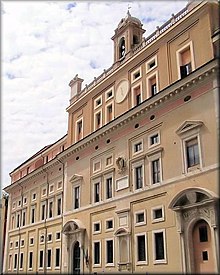 After the Kingdom of Italy emerged from the Kingdom of Sardinia-Piedmont in 1861 , Florence took over from Turin as the capital in 1865 . In Florence, the Biblioteca Magliabechiana had been merged with the Palatina to form the new national library in 1861 . When Rome in 1870 after the removal of the rest of the Papal States was declared the capital of Italy, the National Library did not move from Florence to Rome. Instead, a second national library was built in Rome from 1873. These two libraries have been called the "Central National Library" since 1885 in order to emphasize them compared to the other, lower-ranking Italian national libraries.

The National Library in Rome was opened on March 14, 1876 in the Palazzo del Collegio Romano , at the former seat of the Collegio Romano . In 1873, on the basis of a decree on the nationalization of church libraries, the holdings (45,000 volumes) of the Jesuits' Bibliotheca Secreta, founded in 1551, were taken over. In addition, there were the holdings of 69 nationalized convent libraries . At the same time, personnel were sent to support the neighboring, also nationalized Biblioteca Casanatense . For a certain period of time, the two libraries were not only connected in terms of administration, but also structurally through a transition.

For a long time the National Library in Rome was named after King Victor Emmanuel II . The name is no longer part of the official name.

The BNCR describes its tasks as follows: "Collecting and preserving Italian literature, documenting the main foreign writings, especially those relating to our country, creating a national bibliographic service, disseminating and making available the existing collections."

Ten years after the first all-Italian library regulations of 1869, the BNCR was granted legal deposit in 1880. In order to do justice to the claim of literary diversity and completeness in the country together with the BNCF, it comprised all modern literature. As with the BNCF, the basis was the royal decree of 1885, which obliged the BNCR to publish the Bollettino delle opere moderne straniere (BOMS); a general catalog, which was supposed to keep current records of the foreign publications collected in the 37 most important Italian libraries. The catalog is now distributed in print. 400 copies are sent to state, municipal and provincial public libraries, university libraries and institutions and secondary schools within Italy. 125 copies of the catalog are distributed abroad. A CD-ROM version has also been available since 1999.

In the inner city of Rome, the publicly accessible parliamentary library Polo bibliotecario parlamentare, together with the adjacent Biblioteca Casanatense, meanwhile rival the BNCR.

The BNCR is a library that is fully accessible to anyone over the age of 18. In addition to the national bibliography Bollettino delle opere moderne straniere , it offers other services for its users.

The inventory of the BNCR is recorded in various general and special catalogs. There are both systematic and alphabetical catalogs for monographs, periodicals, university publications, manuscripts, manuscripts, geographical maps and the special collections mentioned. All catalogs follow the rules of DDC or RICA and ISBD and were drawn up with the assistance of the Servizio Bibliotecario Nazionale (SBN).

The BNCR, like the BNCF, is affiliated with the Digital Library of Italy ( Biblioteca Digitale Italiana ). The international standard format UNIMARC applies to data exchange in the BNCR, as in the BNCF.

The BNCR is also an important point of contact for other bibliographic services. The Bibliographical Information Office, Centro Nazionale di Informazioni Bibliografiche , was set up in Rome in 1931, and since then it has published the INDEX Translationum , an international bibliography of translations , published by UNESCO . In the same year, under the responsibility of the BNCR, the Indice generale degli incunaboli (IGI) was published for the first time , the complete catalog of Italy's cradle prints covering the period from 1500 to 1900. In the course of this, a separate set of rules was drawn up for the inventory and cataloging of manuscripts and insignia. The Centro nazionale per lo studio del manoscritto (Center for Manuscript Studies) has been in Rome since 1989. It holds more than 100,000 microfilms of all manuscripts available in Italian public and private libraries.