The National Library of Scotland (NLS), ( German  Scottish National Library ; Scottish Gaelic language : Leabharlann Nàiseanta na h-Alba ) in Edinburgh is a national library within the distributed system of the United Kingdom . It is the legal deposit library of Scotland and is responsible for collecting and indexing writings from and about Scotland.

The holdings are based on collections stored in various buildings in the city center. The library's headquarters are on George IV Bridge Street between the so-called Old Town and the University of Edinburgh district . In a more modern building of the library on the south side of the city on Causewayside-Strasse, special collections such as maps, printed music and manuscripts and the natural science collections are kept.

The Scottish National Library is a relatively young institution, formally established by parliamentary resolution in 1925. It was previously part of the Advocates Library , which was part of the Faculty of Advocates , as Scotland's depository library . This predecessor was opened in 1689 and made a national library by the Copyright Act in 1710 . This was the library as well as the British Library , the National Library of Wales , the libraries of the universities of Cambridge and Oxford and Trinity College Library in Dublin the right to a legal deposit each published in the UK book. The library grew through the purchase of books and manuscripts, as well as receiving deposit copies.

In the 1920s it became apparent that such a significant collection could no longer be managed by a private institution. With a donation of £ 100,000 from Sir Alexander Grant , the library's holdings were donated to the Scottish people. In 1925 the Scottish National Library was officially established by the Act of Parliament.

Sir Alexander Grant provided an additional £ 100,000 to build a new library building. Government grants supplemented the total amount necessary for the construction. Work on the new building began in 1938, was interrupted by World War II and ended in 1956. The architect was Reginald Fairlie . 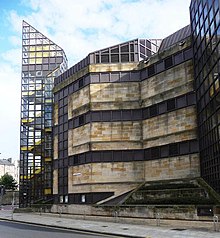 Extension on the Causewayside (opened in 1988)

In the 1970s, the space for storing additional library holdings became increasingly scarce, so that the need for an extension became apparent. The so-called Causewayside Building in the south of Edinburgh opened in two phases: 1989 and 1995. The total cost was £ 50 million.

Since 1999 the library has been funded directly by the Scottish Parliament and managed by a group of trustees. It is one of six libraries in the UK and Ireland that receive legal deposit.

The National Library of Scotland has 7 million books, 14 million print media and over 2 million maps. The collection contains editions of the Gutenberg Bible , Shakespeare's folio and numerous magazines and publications.

Further treasures of the library are family manuscripts, one of which is a copy dating back to 1488 of the Sinclair clan .

A letter from Mary Queen of Scots was presented to the public as a treasure in the library collection as one of the exhibits at the opening of the Visitors and Exhibition Center in September 2009.