The Gutenberg Bible , also called "B42" or "B-42" due to the number of lines per page, is the first book in the western world to be printed with movable type . The Latin Bible was created between 1452 and 1454 in Johannes Gutenberg's printer's workshop in Mainz . With the help of the employee Peter Schöffer , the financier Johannes Fust and about 20 other employees, about 180 copies were created. In addition to the 150 or so Bibles printed on paper, there were about 30 editions on parchment . The design of the fonts and the printing adheres very closely to the appearance of contemporary manuscripts . Because of its historical significance and aesthetic quality, the 42-line Bible is considered the most important and valuable book in printing history .

A manuscript from the Vulgate served as a template for the sentence , the translation of the biblical text into Latin that was made by Jerome and was the standard text of the Latin Bible at the time of Gutenberg. 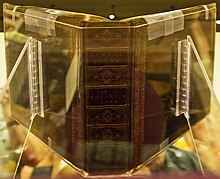 Binding of the Gutenberg Bible in the New York Public Library

The type area has a size of about 19.5 × 29 cm and consists of two columns ( columns ). Each column contains 42 lines, which result in a uniform justification in the overall picture . In order to achieve an even margin, Gutenberg used a variety of different letter forms, ligatures and abbreviations. In total, the text is made up of 290 type variations: 47 uppercase letters, 63 lowercase letters, 92 abbreviations, 83 ligatures and 5 punctuation marks .

Gutenberg chose Textura , a variation of the Gothic minuscule, as the font . It was often used in liturgical books and was characterized by a large font size . As a result, the Bible text was readable even in low light and from a distance and was suitable for use in the church.

Genesis 1 in the sparsely illustrated copy of the Bodleian Library

Awards in the text were made after printing. You were the rubricator's area of ​​responsibility . In addition to the copy of the Bible , he received a tabula rubricarum in which all the desired awards were listed. Colored drawings and initials were also inserted individually by hand after printing. Illustrators took on this task. Some of these worked on behalf of the printer, some on behalf of the buyer. There are no pictures on individual pages in the B42. The free areas around the text field are decorated, mostly with tendrils of flowers and leaves. This means that every edition of the Bible is unique.

Special features in typesetting and printing

On pages 1 to 9 and 257 to 263 the columns consist of only 40 lines, on page 10 there are 41 lines. The remaining pages, unless they are at the end of a chapter, have been set with 42 lines throughout. The type area remained unchanged, however, only the line spacing ( leading ) was reduced. This certainly led to a saving in paper or parchment and thus to a reduction in costs.

Another irregularity can be found on pages 1, 7, 9, 257 and 258. Gutenberg tried to insert the red awards into the printing process as well. For this purpose, the black letters were first printed and the colored ones inserted in a second step. However, the result did not seem to do justice to the desired look or the workload was considered too high. The red print has been discontinued. The mentioned deviations could be an indication that Gutenberg, while the Bible was being made, was fine-tuning his developments and trying to achieve improvements.

There are no reliable historical sources about the origin and manufacture of the B42. In order to be able to reconstruct the Bible print, the research carried out several examinations on the preserved copies. In addition to analyzing printing inks and paper, she compared the copies with one another very carefully. This leads to the speculation that, later at the beginning of four six pads to the set production worked and was printed in parallel on two presses. A period of two years is calculated for the entire process from type production to the printed pages. In addition, there was the time required for categorization , illumination , binding and cover design, which was carried out by external workshops. A copy of a Bible copy in the scriptorium took a similar timeframe . With the help of his development of printing with movable metal letters, Gutenberg produced around 180 copies during this time.

Publication date and number of copies

There are two sources that allow conclusions to be drawn about the appearance and number of copies of the B42. On the one hand, a handwritten note in the paper copy of the Bibliothèque Nationale in Paris, according to which the binding and illumination were completed in August 1456. At this point the print had to be finished.

The second document is a letter from Enea Silvio Piccolomini (later Pope Pius II), dated March 12, 1455. He reported to the recipient, Cardinal Juan Carvajal, of a visit to Frankfurt am Main. During the visit he met an “amazing man” who presented Bible pages “in the most clean and correct script, nowhere duplicated”. Piccolomini further reported that the Bibles were sold before they were finished and that he had heard of 158 and 180 books that were finished. If he speaks of Johannes Gutenberg and the B42, as the research suggests, then the printing of the Bible was completed before the beginning of 1455. Piccolomini's different figures are explained by a change in the number of copies in the printing phase. This argument is supported by the fact that in some surviving copies the 40-line pages have been replaced by newly set 42-line pages.

Showcase with the Gutenberg Bible from the Library of Congress (1944)

In 1979, the Munich librarian Ilona Hubay presented a list of all existing copies of the 42-line Gutenberg Bible : the known copies of the forty-two -line Bible and their owners , which she published for the first time in the commentary on the facsimile edition of the Berlin copy. She identified 47 pieces and their owners. Two more copies have been identified since the Hubay directory was published, so that today there are 49 known copies of the Gutenberg Bible worldwide. Some of these are only preserved in one volume or in fragments . In 1987, the Japanese book retailer Maruzen Co. Ltd. acquired (Tokyo) a volume from the possession of the American collector Estelle Dohany for 4.9 million US- $ (The Frankfurter Rundschau called the price of 5.39 million US- $ at the time.): The purchase price is one of the highest, the has ever been paid for a printing unit.

The copy in the Lower Saxony State and University Library in Göttingen was included in 2001 by UNESCO in the list of the world document heritage "Memory of the World" .

Digitized copy from the German Museum of Books and Writing , now in the Russian State Library

Vellum copy from the Library of Congress

A Japanese digitization team in particular scanned copies of the Gutenberg Bible. Most of these digital copies can be viewed online free of charge.

No digital copies of single sheets are recorded. All copies listed here are fully digitized and can be viewed free of charge. The (now incomplete) list is arranged alphabetically by library location. A complete list , however, is available in the database of the complete catalog of the balance sheets.