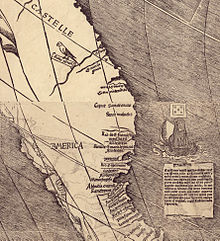 Memorial plaque opposite the building at Löwenstrasse 16 in Freiburg. The house was destroyed by an aerial bomb during World War II. Today, part of the Kollegien Building III of the University of Freiburg stands at this point

Martin Waldseemüller (also Waltzemüller , Graecized Hylacomylus or Ilacomilus * to 1472 / 1475 in Wolfenweiler at Freiburg ; † 16th March 1520 in Saint Didel ) was a German cartographer of the Renaissance . He created the first world map on which the land masses in the west after Amerigo Vespucci were named "America".

Waldseemüller was not born in Radolfzell or Freiburg im Breisgau - as was often assumed in the past - but in Wolfenweiler in the Binzenmühle , which still exists today , as the son of a butcher . A street there is named after him today.

At the age of about 20 he was enrolled at the University of Freiburg in 1490 under the name Martinus Waltzemüller . He studied mathematics and geography. One of his teachers was Gregor Reisch , who introduced him to cosmography . During his studies he got to know Matthias Ringmann from Alsace .

After completing their studies, Waldseemüller and Ringmann traveled together to St. Didel (Saint-Dié-des-Vosges) on the west side of the Vosges in the Duchy of Lorraine . The monastery there had developed into a center of the humanist movement in the Middle Ages . Waldseemüller joined a small group of scholars who referred to themselves as the Vosagense Gymnasium. The Freiburg native taught there as a professor of cosmology, but at the same time worked as a cartographer with Ringmann, who was a professor of Latin .

One of the first writings that Waldseemüller wrote was Hylacomylus . It was a description of the voyages of the Italian navigator Amerigo Vespucci .

Waldseemüller's best-known work is the map of the world he created in 1507 with the help of his partner Ringmann. Together with a terrestrial globe and an inscription, it is to be seen as a three-part project, the Waldseemüller the Latin name

The globe and the map are the first cartographic evidence to see the “ New World ” as a new continent and to name it America . One takes into account that the not very clearly localized Caveri map from 1506, which in turn goes back to the Italian Cantino Planisphere of 1502 and thus to the discoveries of the Portuguese Pedro Álvares Cabral around 1500 and other seafarers, one of the most sought-after works for the predecessor Map of Waldseemüller could have been.

Appreciation of Waldseemüller in the preface to Friesen's explanations

The map consists of twelve rectangular individual pieces and was first prepared as a wood engraving . It is believed that it was commissioned and supported by René II , Duke of Lorraine. Due to the central location of his rule, he had good contacts to the European royal houses. It is believed that instead of bribes, he was given geographic information gathered by seafarers on their way west, when he was known to be very interested in cartography. He passed this knowledge on to Waldseemüller.

Based on Vespucci's travelogue Mundus Novus , which the printer Hans Grüninger published in Strasbourg in 1509 , Ringmann and Waldseemüller were the first to take the view that the islands that Columbus discovered were actually called West Indies and viewed as islands offshore India and Asia represented a new, unknown continent in the ocean. As already mentioned in Hylacomylus , they saw Vespucci as the true discoverer of the continent, as he had explored the coast in detail and described it. At the suggestion of Ringmann, Waldseemüller entered the name "America" for the new land mass in honor of Vespucci . (Whether this happened with or without Vespucci's knowledge, could not be definitively clarified.) He feminized Vespucci's first name for it, a common practice, since the names of all continents known at the time - Europe, Asia (= Asia) and Africa - also have a feminine ending possessed.

After Waldseemüller's death, Grüninger published his maps in a reduced form with an explanatory booklet by Lorenz Fries , which was reprinted several times from 1525 to 1530 and made a significant contribution to the establishment of the continent name "America".

The twelve individual parts of the card, four in length and three in width, are each up to 46 centimeters wide and up to 62 centimeters long. Overall, the card is 128 × 233 cm in size. The companion volume Cosmographiae Introductio , which explained the cartographic knowledge of the time , belonged to the globe . The globe segment map is centered on Europe and designed as an equal-area cone projection so that the meridians are curved. At the North Pole there are two more small representations of the western and eastern hemisphere . This makes it particularly clear that the new continent does not border Asia, but lies separately in the sea. On the western hemisphere is Claudius Ptolemy , on the eastern hemisphere Vespucci. This is to make it clear that this map connects the old knowledge with the new.

About 1,000 copies of the card were printed and sent to well-known merchants, nobles and clergy.

The importance of the map for the science of that time and its worldview was great. If it was initially rejected by conservative circles, it was soon accepted by scientists and like-minded people. They were seen as the yardstick by which other cartographers had to act. 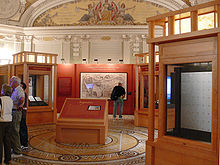 Facsimile of the Waldseemüller card in the Library of Congress (2007)

According to current research, there is only one copy of the map, which was once widespread in print. It originally belonged to Johannes Schöner , a Nuremberg scientist of the 15th and 16th centuries. In 1836 Alexander von Humboldt wrote that he had found "the name of the mysterious man" who "first proposed the name America to designate the new continent". In 1901 the piece was rediscovered by Josef Fischer SJ., The later famous historical cartographer Joseph Fischer (geographer) , at Wolfegg Castle in Upper Swabia. It was first published in 1903 by him together with Franz Ritter von Wieser (Vienna). For decades, the Library of Congress in Washington DC tried to acquire the well-preserved piece, but it remained in the possession of the Haus zu Waldburg-Wolfegg and Waldsee for a century - and was not accessible to the public because the security precautions would have been too complex and even state institutions in Germany did not want to and could not bear such costs. On June 27, 2001, the head of the house, Johannes zu Waldburg-Wolfegg , sold the card. His statement on 18 November 2007 as part of the series of talks and Coronets in Stuttgart's Haus der Geschichte Baden-Wuerttemberg , according to 10 million were US dollar spent. That is the highest price that has ever been paid for a cartographic good.

During the sale - accompanied by public criticism - the export protection for nationally valuable cultural property in accordance with the Cultural Property Protection Act (Germany) was lifted by a special permit from the Federal Republic of Germany and the State of Baden-Württemberg . Gerhard Schröder had personally advocated an exception. The symbolic handover took place on April 30, 2007 by the Chancellor of the Federal Republic of Germany Angela Merkel in the course of a ceremonial ceremony in the Library of Congress , Washington, DC In her speech, the Chancellor emphasized that the United States' merits for German post-war development the decisive factor for handing over the Waldseemüller map to the Library of Congress as a sign of transatlantic solidarity and as a reference to the numerous German roots of the USA. Among the guests at the handover ceremony was next to the majority leader of the Democrats in the House of Representatives , Steny Hoyer , John also to Waldburg-Wolfegg, the seller of the card. In 2005 the map was declared a World Heritage Site by UNESCO .

A facsimile was displayed in the Library of Congress in the Treasures exhibition until 2007 , after which the original was made available to the public. The card is in a special air-conditioned showcase designed to slow down the aging process of the print. Another 1½ million dollars were invested in the appropriate presentation of the card.

On the Waldburg , the house castle of the princely family, a facsimile is shown that was made after the original Waldseemüller map was found in 1901. The castle houses a museum and is open to the public from April to October.

In the same year, Waldseemüller's client Matthias Ringmann wrote the Cosmographiae introductio ( German  introduction to cosmography ). In this book he attributed the main discovery of the "New World" to Amerigo Vespucci after studying his letters to Lorenzo de Medici . He justified the naming as follows:

“Now in truth these parts of the new world were specially explored and another part of Americus Vesputius was discovered […] and it is hard to see why anyone should forbid naming the new land Amerige, land of Americus, after its discoverer Americus, a particularly astute man, or America, since both Europe and Asia have their names from women [...] "

The terrestrial globe segment map from 1507

The terrestrial globe was published at the same time as the map and the inscription Cosmographiae introductio 1507 and is also addressed in the name of the project. Like the map, it showed America as a new continent.

It was published as a segment map that can be folded into a globe. Few of the globe segment maps produced in 1507 are known to have survived that are now regarded as originals: One was discovered in 1993 in the holdings of the Historical Library Offenburg . Two other copies are kept in the USA. The Prince of Liechtenstein sold one copy in 1954 to the James Ford Bell Library at the University of Minnesota in Minneapolis , while the other was auctioned by Christie's in 2005 for one million US dollars . This map later turned out to be a forgery of the 20th century based on the map of the University of Minnesota - just like a copy that was acquired by the Bavarian State Library for DM 2 million at the time and sold by the widow of the renowned art dealer Hans Peter Kraus Century out.

In 2012, another copy was found in the Munich University Library that differs slightly from the four previously known copies. Its origin is estimated to be "probably some time after the first printing in 1507". Waldseemüller's globe segment map was found in a geometry book; Bound as an anthology in the 19th century and stored in the university's collection, as with the other copies, forgery can be excluded. The map is the only one with the indication "Diameter Globi" for the size of the globe, the positions of individual countries differ. The watermark on the paper indicates that the card was printed just under a decade after the first.

After Ringmann's death, Waldseemüller deviated from his own ideas and apparently no longer believed that America was a continent of its own. In a new map, which he created in 1513, he therefore again referred to it as Terra incognita (German: unknown land ). However, the name America was so widespread and widely accepted that the public kept it as the name of the "New World".

Combined sheets of the Carta Marina by Martin Waldseemüller, 1516

With his map of the world from 1516, a nautical chart , there is another work, the original of which is spread over 12 sheets. It is characterized by its straight line representation with a horizontal and vertical axis scale and also uses a set of auxiliary lines with 16 centers on a circular line and a center point, so that it is extremely similar to the Caveri map from 1506. The degree of decorative design appears somewhat reduced compared to his map from 1507.

Waldseemüller began his Carta itineraria europae in 1511 and completed it around 1520. It is a southerly map (labeling partly north) that shows Europe. Furthermore, it shows all the coats of arms of the states and subjects of the German Emperor Charles V at that time and is dedicated to him.