A map network design (also called map projection or map mapping ) is a method in cartography with which the curved surface of the (three-dimensional) earth is transferred onto the flat (two-dimensional) map .

The process of modeling takes place with the help of mapping rules that can be expressed mathematically. Map projections can also be explained graphically or geometrically.

In the modern development towards spatial data infrastructure (technology and terminology), map network designs form a special type of coordinate reference system and represent a method of converting a mathematical earth model into the plane. Over 400 different images are known.

Basically one classifies map network designs either according to

Classification according to image areas

Selection of the image area

Most map network designs are not physically projections . They are more based on mathematical formulas. However, in order to understand the concept of map projection, it is helpful to imagine a globe with a light source. This light source projects the points, lines and surfaces of the globe onto an auxiliary surface that can easily be rolled into the plane.

Either a plane , a cone , a cylinder or another surface can be used as an auxiliary surface. By projecting the globe elements onto this auxiliary surface, a flat image is obtained. However, you have to roll the cone and cylinder surface into the plane beforehand. In principle, one can differentiate between all map projections according to the type of auxiliary area used.

In an azimuthal imaging, the image plane touches the earth at one point. Many azimuthal images are real perspective projections ( central projections ), which means that they can also be constructed geometrically.

Comparison of the central and azimuthal projections depending on the center

The true view of the globe (or any other celestial body) is not suitable for cartography, not only is it not true to length, angle or area, it also shows only a limited section of a hemisphere (half the surface). A geostationary satellite, for example, has a coverage area of theoretical maximum only 42% of the earth's surface from above the pole from one would not see the equator. The following geometric projections with a projection center are common to remedy this problem:

Further figures are defined purely mathematically. As a rule, they cannot be constructed geometrically with a compass and ruler. But they have special properties that cannot be achieved by the geometric projections. The main uses are:

All mathematical constructions that are similar to real azimuthal projection are summarized under fake azimuthal mapping .

With conical images (cone projections) , the earth is mapped onto a cone. The cone axis runs through the center of the earth. The position of the two intersection or the contact circle determines the shape and position of the cone. Azimuthal and cylindrical maps are borderline cases of the general cone map. The following applies to cones in normal position:

Cylinder projections are constructed around the earth using a cylinder.

Fake cylinder images are mathematically constructed images in which the central meridian and all circles of latitude are straight or at least straight lines.

Classification according to position or aspect of the image surface

After the choice of the auxiliary surface has been determined, its location must now be decided. The earth axis and the mass line of the auxiliary body are used for the description. With a plane this is the vertical, with a cylinder the center line and with a cone the center line through the apex. The different imaging surfaces can be placed anywhere on the surface of the sphere. The choice of the position (= aspect of the image area) is determined by the part of the earth's surface to be imaged, for which the image is to be optimized:

A card should reproduce the original as precisely as possible. When the sphere is mapped onto the plane, however, distortions are inevitable. (Mathematically: The Gaussian curvature is an invariant among isometries ; the spherical surface with radius r has the curvature 1 / r, the plane, however, the curvature 0, consequently there can be no isometry between the spherical surface and the plane.) This phenomenon can be visualized with help imagine an orange: Even if you manage to peel it in one piece, you can only get the peel (earth's surface) flat with strong pressure (paper) and accept distortions (the peel stretches, tears or folds) . This phenomenon of distortion can be justified using differential geometry. The Tissot indicatrix (distortion ellipse) is used to describe the local distortion properties at a point .

Thus, the length of a route, the size and shape of an area or the angle between two lines can change through the map projection. As a result, the scale on a map can also vary. A popular example is the almost huge representation of Greenland in the Mercator projection. These distortions can never be completely eliminated. All map projections contain at least one form of these distortions, which is why you have to decide on certain advantages and disadvantages among these mapping properties:

The length accuracy can only be achieved to a limited extent with flat maps: in certain directions or at certain points. All real images are true to length at the contact or intersection circles. Absolute length accuracy in all points and in all directions is not possible. In the case of conformal images, the length distortion at a certain point is the same in each direction ( azimuth ).

The globe offers the possibility of reproducing all metric properties almost correctly on a certain scale. Due to the very small scale , a sphere is sufficient as an approximation for the earth figure - a slightly flattened ellipsoid of revolution.

These images are not absolutely true to length, but only permit true length measurements along lines other than the contact or intersection circles.

These images correctly represent the size of an area (e.g. a continent). However, the shape can be very distorted. These images tend to have strong shape distortions, especially at the edge of the map.

True-to-angle images are required in particular for navigation in shipping and air traffic to create maps, but also in crystallography .

Since no map image completely eliminates all distortions, some intermediary images were developed as a compromise. Attempts have been made to minimize distortion with them.

In the normal position, the longitudes remain straight lines in real images , the latitudes are shown as right-angled concentric circles, arcs or straight lines. All other images fall into the group of fake or Pseudo-images .

In contrast to the real cylinder images, the meridian images are (mostly) (p) curved lines. 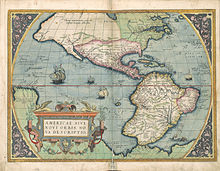