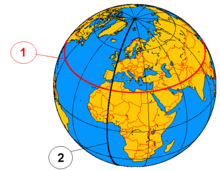 1 circle of latitude
2 meridian (half longitude)

Parallels that are parallel to the equatorial plane extending in the east-west direction of circular lines on the (idealized) surface with a constant φ latitude . In the navigation teach the latitude is fachsprachlich parallel of latitude called. The counterpart is the longitude .

While the width circles vertically extending length circles all great circles are, the width of circuits are generally small circles - up to the equator, which as width 0 ° northern and southern latitude the earth in a northern and southern hemisphere divided. Other special parallels are the tropics and the polar circles, which acquire their importance for the position of the sun in the course of the seasons through the inclination of the ecliptic . The definition of the climatic zones also relates to certain parallels.

The distance between two parallels with a latitude difference of one degree is on average approximately 111 km, but is smaller than in the extreme northern and southern latitudes due to the flattening of the earth near the equator. Calculating the length of the circles of latitude as 2 π R · cos φ with a constant earth radius R would have a similar error . Determining the exact distance between two circles of latitude is the task of the degree measurement . With their help, the exact shape of the earth figure can be determined.

Due to the precession and nutation of the earth's axis , the parallels of the polar circles and the tropics are variable.

Parallels are often used as a border between countries or regions, especially in North America and in colonies .