This article deals with precession under fluctuating external influence. For the movement of the figure axis of a freely rotating body see Nutation (Physics) . 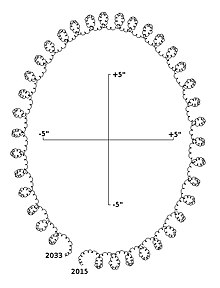 The astronomical nutation (from Latin nutare 'nod') is the relatively rapidly fluctuating part of the precession of the earth's axis in space under the influence of the sun and moon . The strongest of these fluctuations is caused by the precession of the lunar orbit , whose nodal line revolves with a period of 18.6 years. The amplitude of this component is

Other components of nutation have amplitudes below 1 "and shorter periods.

Together with the direction of the earth's axis, the orientation of the equatorial coordinate system for the star locations also changes .

The nutation of the earth's axis was discovered in 1728 by James Bradley , when he was doing precise analyzes of star coordinates . The cause could only be clarified 20 years later. The aberration of light, also discovered by Bradley, is similarly large.

Influence on the star coordinates

Since the earth's axis and ecliptic define the astronomical coordinate system, the coordinates of all celestial bodies change with the direction of the earth's axis. For the approximately 2000 fundamental stars - on which most measurements in the sky are based - the star locations are calculated in advance, taking precession and nutation into account, and published in astronomical yearbooks or on the Internet . The most important of these yearbooks is called Apparent Places of Fundamental Stars and is published annually in advance by the Astronomisches Recheninstitut (ARI) in Heidelberg.

However, the influence of the “short-period” nutation components with periods of less than 35 days is not taken into account in the case of stars whose locations are tabulated at intervals of ten days; they have to be calculated using auxiliary tables or small additional programs and added to the published star words.

The influence of the pole movement , however, is attached to the measurements themselves, as is the time correction dUT1 of the earth's rotation .

The different periods of nutation

To calculate the nutation of the earth, models have been published by the IAU . The positions of the moon and sun are taken into account (IAU 1980 Theory of Nutation) , with the latest model also the planetary positions (IAU 2000A Theory of Nutation) . The 1980 theory achieves an accuracy of 0.0001 ″, which is sufficient for most astronomical applications.

The basis is formed by the periodic elements of nutation with their different period durations (see graphic).

JDE traditionally means Julian date counted according to ephemeris time , which can be transferred almost identically to the date and time value in TDB . For a conversion from UTC , the value of Delta T is particularly required, which in 2010 is about 61 seconds.

with the mean current inclination of the ecliptic .

For the further calculation, five influencing variables are required:

For further calculation it is recommended to reduce the angle to the value range 0 °… 360 °.

With the following table the individual expressions are summed up as follows:

If sines and cosines require arguments in radians , the values ​​of the previous calculations must be converted into radians . The result ( ) is available in arc seconds .

Table of the IAU 1980 Theory of Nutation

If you only consider the terms up to degree 1 for the five polynomials and only use the first four table rows (these have the highest coefficients), a simplified formula can be derived. For this purpose, the argument of each sine and cosine value, which is a linear combination of the five input values, is explicitly calculated. The conversion to rad is also done, as most implementations require this information.

The nutation then results from

The IAU 2000 Theory of Nutation

The theory from 2000 consists of a lunisolar and a planetary table. Here, the accuracy can be increased to arc seconds; however, these tables have about 470 terms. The exact position of the planets is also required.