In German, the usage of the language is not uniform: For the JD, besides the frequent "Julian date", there is also, for example, "Julian day number" (which stands for the JDN) or "Julian day value". The JDN is usually only found in phrases like "the Julian day 2,452,276". The German terms used here are taken from a dictionary.

As a continuous day count, the Julian date is free from irregularities such as leap days or months of different lengths, as occur in most calendars . It is therefore very easy to calculate time differences. For areas such as ephemeris calculation, in which a completely uniform time measurement is required, the IAU recommends using terrestrial time (TT) as the basis of the Julian date instead of Universal Time (UT) .

An important variant of the Julian date is the Modified Julian Date (abbreviated MJD in all languages ). 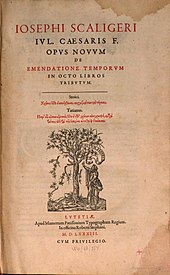 A first step towards today's Julian date was made with the book De emendatione temporum by the French humanist Joseph Scaliger , published in 1583 , which "because of its ... analytical precision had an enormous effect on any chronological or historical work". Scaliger systematically dealt with all important calendar systems of antiquity and the Middle Ages and related them to a reference calendar. To this end he introduced a Julian period lasting 7980 years , which he called “ quia ad annum Iulianum duntaxat accomodata est. ”(German:“ because it is of course adapted to the Julian year. ”). Their length is the smallest common multiple of the period length of three important cycles for the calendar calculation, the 28-year solar cycle , the 19-year lunar circle and the 15-year cycle of indiction . As year 1 of the Julian period he chooses the year 4713 BC. Because in that year all three cycles began a new run at the same time; the year 7980 of the Julian period is thus the year 3267 AD. For each year of the Julian period, the position in one of the three cycles can now be determined by calculating the remainder when dividing by the respective cycle length. 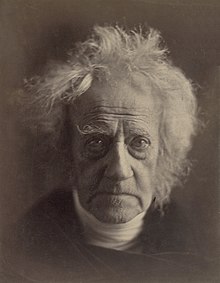 A continuous measure of time, called “ day current of the Julian period ” (German: “current day of the Julian period”), which coincides with today's Julian date except for one detail, was published in 1849 by the British astronomer John Herschel in his book Outlines of Astronomy suggested. Here, like today, a date or point in time is determined by the time that has passed since the epoch January 1st −4712 (4713 BC), 12:00 o'clock and measured in days and fractions of a day. The only difference is that Herschel based his definition not on the mean local time of 12:00 noon in Greenwich, i.e. today's UT, but rather on the basis of 12:00 noon mean local time in Alexandria . As a justification he stated that the Nabonassar era used by Claudius Ptolemy was based on this . Herschel's definition therefore provides values ​​0.083 larger than the one used today. After the introduction of Greenwich Mean Time, now known as UT, in 1884, the Julian date (JD) was used at the latest in 1893 with this name and the definition still valid today (epoch January 1st −4712, 12:00 UT). The year of the epoch and the "Julian" in the name therefore go back to Scaliger. Starting the day at noon and using fractions of the day has been a common practice in astronomy since ancient times.

Herschel had already spoken out in favor of shifting the astronomical start of the day to midnight, but it was not until the first half of the 20th century that astronomers gradually joined the general agreement and moved “their” start of the day forward by 12 hours. Before January 1, 1925, Greenwich Mean Time, as it was used in astronomy, had its day change at noon; it was only from this date that the day began at midnight. As recently as 1928, the IAU asked to indicate when the day started for all work. "UT" stands for the beginning of the day at midnight; the term “GMT” should no longer be used.

As a result, the noon change of day for the Julian date was increasingly perceived as disturbing, and so the IAU decided in 1973, in order to avoid uncontrolled growth in the form of many different dating systems, to introduce a variant in addition to the JD with the day beginning at midnight in Resolution 4: It proposed the Designation “ Modified Julian Date ” (German: “Modified Julianisches Datum”) (MJD) to be used only for the size defined by JD - 2,400,000.5. This daily count had already been introduced in 1957 by the SAO for its program to observe the first Soviet Sputnik satellites. In the 1990s, however, there were efforts among astronomers to withdraw this recommendation. Out of consideration for neighboring disciplines such as geodesy , geophysics and space travel , in which the MJD was widely used, the recommendation from 1973 was not repealed. Rather, the IAU confirmed the parallel use of JD and MJD in 1997 in Resolution B1 and carried out a “ Julian day number ”(German:“ Julianische Tagesnummer ”) (JDN), which indicates the sunny days (starting at noon) since 4713 BC. Numbered consecutively. For astronomical purposes it recommends the use of the Julian date, while it recommends the Modified Julian date "in those cases where it is convenient to use a day beginning at midnight".

In addition to the coordinated universal time UTC, scientific time measurement uses several different time scales , each of which is particularly suitable for certain purposes, e.g. B. Universal Time UT1, International Atomic Time TAI, Terrestrial Time TT, Barycentric Dynamic Time TDB etc. On each of these time scales, a continuous time count can be introduced in the form of a Julian date, whereby the epoch is January 1st −4712 , 12:00 on the relevant time scale. The unit is the day with 86,400 seconds on the relevant scale; An exception is where the individual days a UTC leap second will be extended to 86,401 seconds. On the time scales UTC (from 1972), TAI and TT, the second is the SI second . Since the individual time scales differ from one another, the relevant Julian dates for one and the same event are also different. In case of doubt, it must therefore be stated on which time scale the Julian date used is counted, e.g. B. "JD (UT1)", "JD (TT)" etc. The IAU recommends the use of terrestrial time as the underlying time scale. The abbreviation “JDE”, which is often encountered, denotes a Julian date counted after the Ephemeris , but is also often used for its successor “JD (TT)”.

UTC as a scale for the Julian date is problematic because of the leap seconds if an accuracy of 1 s or better is desired. In the SOFA library, which contains software for basic algorithms developed on behalf of and under the control of the IAU, the JD (UTC) in connection with leap seconds is referred to as "quasi-JD". And the developers point out that their treatment of the problem has no official status.

The Julian date uses the same time scale as the respective calendar date.

Calculate with the Julian date

The Julian date can be calculated from a Julian or Gregorian calendar date using the following algorithm . The input is expected in the variables Tag, Monatand Jahr, which can Tagalso contain a fraction of a day ( hour / 24 + minute / 1440 + second / 86400); the output is in JD.

The algorithm correctly handles both Julian and Gregorian calendar dates even if they denote days before the calendar was actually introduced, that is, if the calendar's rules are applied proleptically ; Irregularities in the placement in the early stages of the Julian calendar are not taken into account. For the pre-Christian years, astronomical, not historical, counting is also assumed, i.e. 0 for 1 BC. BC, −1 for 2 BC Chr. Etc.

It must be known in which of the two calendar systems the date is present. The earliest and most frequently used change in dating took place in 1582: October 4th (Julian) was followed by October 15th (Gregorian). However, many countries later switched, and some used the Julian calendar even into the 20th century (see Adoption of the Gregorian calendar ).

The square bracket ⌊ x ⌋ is the lower Gaussian bracket that rounds x down (⌊5,8⌋ = 5; ⌊ − 5,2⌋ = −6). In many programming languages ​​it is called floor. For calendar dates from March −4716 (March 0 for Gregorian dates), the rounding off can be replaced by cutting off the decimal places, since the arguments of the Gaussian brackets are always nonnegative there.

Explanation of the algorithm

The Julian or Gregorian calendar date can be calculated from a Julian date using the following algorithm . The input, the Julian date, is JDexpected in the variable ; the output, the calendar date you are looking for, is in Tag, Monatand Jahr, which can Tagalso contain a fraction of a day ( hour / 24 + minute / 1440 + second / 86400).

Calculation of the day of the week

The regular sequence of the days of the week was not affected by the introduction of the Gregorian calendar: On Thursday, October 4th, 1582 jul. followed Friday October 15th greg. . The day of the week can, therefore, by calculating the remainder of the division of the commercially rounded Julian Date (= ⌊ JD + 0,5⌋) are determined by the 7th Remainder 0 corresponds to Monday, 1 Tuesday, 2 Wednesday, 3 Thursday, 4 Friday, 5 Saturday and 6 Sunday.

Its epoch (zero point) is thus on November 17, 1858 at 00:00 UT. The MJD of times between 1859 and 2131 is two (or more) decimal places less than the JD, and the day starts at midnight. It is mainly used in geodesy , geophysics and space travel , and more rarely in astronomy. The International Service for Earth Rotation and Reference Systems uses it in its Bulletins A and B. For the use of Terrestrial Time TT, what was said above for the Julian date applies.

In operating systems , programming languages or application programs , times are often determined by the time that has elapsed since a fixed zero point and is measured in days, seconds, milliseconds or nanoseconds. Or at least there is the possibility to query this time. Often, the starting point is January 1, 1970, 12 midnight UTC, on which Unix time is based. For the starting points listed in the following table, the time is always 0 o'clock, whereby no distinction is made here as to whether UTC or local time is; the Julian dates entered are for UTC.

With this time measure, the Julian date can be calculated very easily for a calendar date. All that remains is to know the time unit.

In LibreOffice Calc, the time unit is the day. If cell A1 contains a date or a combined date and time value on a timescale such as UTC, you can toggle between displaying this time and displaying it as a decimal number (the time that has elapsed since zero point) by changing the cell formatting. The JD of A1 is then obtained by adding A1 to the Julian date of the zero point:

Alternatively, the difference to any other date with a known YD, e.g. B. the zero point of Microsoft Windows, can be used:

In JavaScript, the unit of time is the millisecond, so the difference to zero time has to be converted into days: