The title of this article is ambiguous. Further meanings are listed under Sputnik (disambiguation) .

Sputnik [ ˈʃpʊtnɪk, ˈspʊtnɪk ] ( Russian Спутник for companion, companion, in astronomical meaning satellite and satellite) was the name of the first ten Soviet satellites that reached Earth orbit. Sputnik 1 was the first artificial earth satellite in orbit on October 4, 1957 and is considered to be the starting signal for Soviet space travel . It triggered the so-called Sputnik shock in the western world .

The word Sputnik is one of the 100 words of the 20th century and is a synonym for satellite in some (especially Eastern European) countries .

After Sputnik 10, the name was no longer used to designate earth satellites, but only to designate space probes stranded in earth orbit .

On August 11, 2020, the world's first SARS-CoV-2 vaccine , developed in Russia and only approved there, was named Sputnik V or Sputnik 5 based on the Russian satellite premiere . 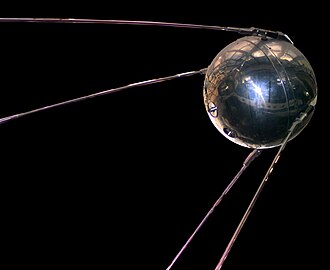 Model of the Sputnik 1

The chief designer Sergei Pavlovich Koroljow was initially unknown in the West. He was therefore Mister X. called. After completing his training at the Kiev Polytechnic, Korolev moved to the Moscow University of Technology , where he dealt with rocket propulsion . This work met with interest from the Red Army . General Tukhachevsky supported Korolev's team from 1935 and initiated the establishment of an institute for the development of rocket projectiles. Production took place in cities closed to the public such as Dnipropetrovsk . Some historians name Mikhail Tikhonrawov as the actual developer of Sputnik 1.

Sputnik 1 - The beginning of space travel

First track record of the launch vehicle from Sputnik 1

During the preparations for the International Geophysical Year , the US President Dwight D. Eisenhower announced on July 29, 1955 the contract for an earth satellite. The Soviet Union responded just four days later by announcing a similar program.

Already on October 4, 1957 - unexpectedly fast for the Western world - the Soviet Union launched from the Baikonur Cosmodrome in the spherical satellite (diameter 58 cm) Sputnik 1 by means of the rocket of the same name , a slightly modified intercontinental ballistic missile of the type R-7 . The earth satellite, weighing 83.6 kg, contained a thermometer and a radio transmitter that was active for 21 days and emitted a shortwave signal (20.005 MHz and 40.003 MHz). The aim was to prove that it is possible to locate artificial objects in space. Sputnik initially moved once around the earth in about 96 minutes in its orbit . It burned up 92 days after takeoff when it reentered deeper layers of the earth's atmosphere. 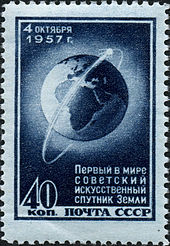 The realization that the Soviet Union was capable of launching the first artificial earth satellite triggered an immense sense of threat in the West: Sputnik seemed to mean that the USA could be reached with ICBMs from the Soviet Union. This phenomenon, also known as Sputnik shock , led to the founding of NASA and to restructuring and increased efforts in the educational field of the western industrial nations.

The other Sputnik missions

The Soviet Union launched a total of ten Sputniks, the last on March 25, 1961, just 18 days before Yuri Gagarin's flight . All launches took place from the Baikonur Cosmodrome using converted ICBMs that were equipped with an additional rocket stage from Sputnik 4 onwards.

At least one completely new feature was planned for every Sputnik mission :

The second man-made body in orbit was Sputnik 2, which was launched on November 3, 1957 and which put the first living being into orbit, the dog Laika . A living return to earth was not planned because the necessary technology could not be completed in such a short time. The fact of the bitch's death aroused much pity - especially when the first blurry TV pictures were shown - but also enormous interest. Presumably Laika only survived the start with its mixture of noise , vibrations and acceleration for a few hours until she died in the tight capsule from stress and excessive heat (the quickly developed temperature control system did not work reliably).

The original plan was that Laika would survive ten days and provide sufficient data on her body functions - and then give her a quick death with portioned, poisoned food. Due to its higher apogee (see peri- and apogee ), Sputnik 2 burned up significantly later than Sputnik 1, namely on April 14, 1958 after 162 days in orbit and around 2250 orbits - orbital time around the earth in 103.7 minutes.

The conical Sputnik 2 with its launch mass of 508.3 kg, a diameter of the base area of ​​about 2 m and a height of about 4 m aroused incredulous astonishment among Western experts and clearly showed the high payload the launcher could carry. They suspected a new missile was being deployed, but it was later revealed that it was the same launcher as the launch of Sputnik-1 . The orbit height of the second satellite was between 225 and 1671 kilometers with an orbit inclination of 65.3 degrees to the equator .

Sputnik 3 in the museum

Sputnik 3 ( called Object-D in development ) was supposed to be the first Soviet satellite to launch into space. Since it was not finished in time and was too heavy, Sputnik 1 took its place. Sputnik 3 was supposed to be launched on February 3, 1958, but the launch failed (→ Sputnik (3) ) and was repeated on May 15, 1958 with a replacement satellite. Sputnik 3 carried twelve scientific measuring instruments (sensors for pressure, temperature and composition of the atmosphere, radiation measuring devices, sensors for electric and magnetic fields) into space, which were supposed to investigate the upper atmosphere and the Van Allen radiation belt of the earth - which also failed , because the tape recorder for the measurement data failed and only a few data from the sensors could be received directly when flying over a ground station. By the space race of the suspected even before the beginning of space radiation belt was American US from the first satellite already in January 1958 Explorer 1 was detected and was later named after the instrument developers. Sputnik 3 had a conical body 3.57 m long, 1.73 m in diameter and a mass of 1327 kg. Its height was between 226 and 1881 kilometers. It circled the earth once in 106 minutes on an orbit inclined by 65.2 °. The satellite burned up on April 6, 1960.

Sputnik 4 (also called Korabl-Sputnik 1 or space ship 1) was launched on May 15, 1960. This was the first prototype for the Vostok spacecraft, which was used for manned flights from 1961 . The orbit height of the satellite was between 312 and 369 kilometers, later between 307 and 690 kilometers. The orbital time around the earth was 91.2 minutes. In 1962 parts of Sputnik 4 crashed on an intersection in the US state of Wisconsin.

Sputnik 5 (also Korabl-Sputnik 2, or space ship 2) started on August 19, 1960 and carried, among other things, two dogs into space: Strelka (Russian for "arrow" → from arrow) and Belka (Russian for "squirrel") . Other passengers were 40 mice , 2 rats and plants . After 18 orbits in an orbital altitude from 306 to 330 km and at a mission in orbit in 90.7 minutes, landed both dogs on August 20, 1960 safely back on Earth. This was the second flight of the Vostok prototype and a crucial step in the soft landing technique .

Strelka later gave birth to six pups, one of which, Pushinka, was given to Caroline Kennedy , the daughter of US President John F. Kennedy . The handover was carried out by the Soviet Prime Minister Nikita Khrushchev .

Today the prepared bodies of Belka and Strelka , exhibited in glass cases, are in the Cosmonaut Museum in Moscow .

Sputnik 6 (or Korabl-Sputnik 3 or space ship 3) was the third prototype of the Vostok spaceship and carried the dogs Pchelka (Russian for “little bee”) and Mushka (Russian for “little fly”) into it on December 1, 1960 Alles. The landing capsule was destroyed on December 2, 1960 when returning to Earth due to a too steep reentry angle. Sputnik 6 was at an orbit height between 187.3 and 265 kilometers and had an orbital time of 88.6 minutes.

Sputnik 7 ( Venera-1 or space ship 4) was a Venus space probe launched on February 4, 1961 with a Molnija rocket , which did not leave Earth orbit due to a problem with the rocket's upper stage. It circled the earth at an orbit height between 223.5 and 327.6 kilometers with an orbit inclination to the equator of 64 to 57 degrees. It took 98.8 minutes to orbit the earth.

Animation of the interior of the Sputnik-10 capsule

Sputnik 8 was the upper stage of the Molnija rocket, which was to carry the Venera-1 space probe to Venus on February 12, 1961 .

Sputnik 9 (or Korabl-Sputnik 4 or space ship 5) was the fourth flight of the prototype of the Vostok spacecraft. He started on March 9, 1961 with the dog Tschernuschka (Russian for "Blackie"), a cosmonaut - dummy , a guinea pig and mice on board. The landing capsule was successfully recovered after orbiting the earth.

Sputnik 10 (or Korabl-Sputnik 5), the last of a total of ten Sputniks, was launched by the USSR on March 25, 1961 as a test for the flight of Yuri Gagarin in April 1961. This was the fifth flight of the prototype of the Vostok spacecraft . On board was the dog Svyosdotschka (Russian for "little star") and the cosmonaut - dummy Ivan Ivanovich . After orbiting the earth, the capsule fell near the village of Karscha almost 20 km east of the city of Tchaikovsky and was recovered together with the animal that had survived the test unharmed.

Carrier systems based on the R-7 ICBM, which carried an additional rocket stage from Sputnik 4 ( Vostok rocket), were used in all cases . Sputnik 7 and 8 used the 4-stage Molnija rocket. All launches were from the Baikonur Cosmodrome.

Sputnik 19, 20 and 21 were the names of Soviet Venus probes. Sputnik 19 was supposed to be launched on August 25, 1962, but ended up in a low earth orbit due to a fault in the kick stage and burned up three days later in the earth's atmosphere. The same fate befell Sputnik 20, which was launched on September 1, 1962 and burned up five days later. Sputnik 21 was launched on September 12, 1962. It did reach earth orbit, but here too the fourth stage failed; their explosion destroyed the satellite.

Sputnik 22 was the code name of a Soviet Mars probe. This should actually be brought on the way to Mars on October 24, 1962 . The 2MV-4 probe, however, only reached low earth orbit because the launch vehicle failed due to the explosion of the fourth stage turbo pump 16 seconds after it was ignited.

On August 11, 2020, the SARS-CoV-2 vaccine “Gam-COVID-Vac” developed in Russia was approved - initially only there. As a tribute to the Sputnik satellites with which the Soviet Union won the space race in 1957, the vaccine was also called Sputnik V on Russian TV . "V" stands for vaccine ( vaccine ) or virus. Occasionally, the interpretation of the "V" as a Roman number is translated as "Sputnik 5".