When noise or noise is noise ( sound ) means that (usually volume) to the structure of their environment (especially humans) disturbing ( background noise ) act, burdensome or harmful to health.

Whether noises are consciously perceived as noise depends in particular on the assessment of the sound source by the listener. Despite acoustic habituation, noise can unconsciously continue to affect the body and psyche . Noise can disrupt the biological rhythm (see also day-night rhythm ) ( disturbance of the peace ) and cause or promote sleep disorders .

Noise sometimes arises together with infrasound . This is not perceived by the human ear. It can have effects similar to audible sound.

The word noise comes from the Italian all'arme , "to arms!" And is related to " alarm ". Up until the middle of the 18th century, noise was primarily a term from the military field, for which u. a. even today unusual compositions such as “noise place” (a place where people stepped under arms), “noise blower” and “noise racket” (trumpeter or drum that gave the call to collect) testify. Almost a hundred years later, the German linguist and lexicographer Johann Christoph Adelung defined the term noise as "every loud, arduous sound". Kurt Tucholsky later once noted: "Noise is the noise of others." B. defined in legal texts as "unwanted sound" and thus contains not only a biophysical and medical component but also a subjective component. For example, noises from children's playgrounds can be assessed very differently depending on the listener - from negative to pleased.

The term Radau, which is often used colloquially for noise, is already used in Berlin in the 19th century ; it came from the student's language, where it represented a sound-mimicking education that was adjusted to foreign-language words through final stress. From Berlin it spread to other language regions. Synonymously is - probably starting from rotwelschen term palhe (noise) from the Ruhr and Rhineland across to other regions - the term fuss or Bahei (originally fuss ) meaning "much ado about nothing" or "a lot of hoopla around do something ”or“ make (big) fuss ”is used.

The auditory perception of noises as noise and the effect of noise on people depend on the one hand on measurable physical quantities:

Advances in measurement technology have made it possible to determine the frequency composition of noises, which is particularly important for aircraft noise .

The information content can increase the disruptive effect of noise, as it attracts increased attention. Although it is not a physical quantity, its presence can nevertheless be determined objectively. Sound, impulse and information content are taken into account in addition to the rest times in the assessment according to the TA Lärm by adding surcharges.

On the other hand, subjective factors are decisive when it comes to the level of noise nuisance:

Noise pollution is used when an activity is interrupted or hindered due to noise. People are particularly sensitive to noise 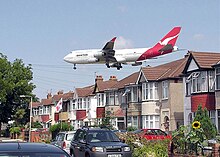 Plane over a residential area

Noise can be assigned to different generating sources. This results in different perceptual relationships and different noise effects. Depending on the source, the following types of noise are distinguished:

This list is not complete, but corresponds to the classifications in the German legal system. There are also other sources of noise such as bells , shooting ranges and public events, some of which are described in special regulations. In the course of European unification, the term environmental noise was re-coined to encompass the totality of human perception of various sources of noise.

Noise measurement on a passing tram

Sound events are measured with sound level meters . There are several options for classifying and evaluating sound as noise. In Germany, the dB (A) has established itself as the unit of measurement for the sound pressure level , with attempts being made to use technical equipment to increase the sensitivity of the human ear at certain pitches, e.g. B. to be considered between 1 and 2 kHz. In addition to the sound pressure level, the duration of the noise, the time of day, the frequency composition and the frequency must be taken into account.

Weighting filters A, B, C, D and sensitivity of hearing

The basis for the legal evaluation of the sound is the measurement or calculation of the sound emission , depending on the regulations and standards applicable in Germany . Since an evaluated measurement of the sound pressure level only incompletely reflects the perceived volume and also the potential damage to the hearing , additions to the physical level are given for certain sound properties, e.g. B. for tonality ("squeaking") and impulsiveness ("hammering"). Assessment levels are formed from the physical sound pressure level and the allowances . The calculation and measurement methods differ fundamentally in some cases (e.g. aircraft noise and road traffic noise). Often, annual mean values ​​are calculated from which the peak noise levels can no longer be identified, for example in rush hour traffic.

Measurement methods for loudness measurement can describe the volume perception of humans relatively precisely. The standards DIN 45631 and ISO 532 B describe procedures for measuring loudness. The result of these measurements is the loudness in sones . The sone is a linear measure, a doubling of the loudness in sone corresponds to a doubling of the perceived volume . In order to obtain comparable values ​​for level measurement, the result of loudness measurements is also given as a volume level - likewise logarithmic - in phon .

To assess the noise situation at the workplace , the noise exposure level must be determined in accordance with the DIN EN ISO 9612 (2009-09) standard. Noise exposure at the workplace is usually made up of different components. The total exposure of a person can be calculated from the noise exposure that occurs during the individual activities and the corresponding time proportions. The noise exposure calculator from the Institute for Occupational Safety and Health of the German Social Accident Insurance can be used for this. The computer is available as an Excel spreadsheet (free download as an offline version) and as a platform-independent web application.

Noise can be stressful and damaging for people and animals. Noise can have a negative impact on overall health through the ear ; one cannot get used to noise. In 2001, there was still considerable need for research here. Noise is an environmental factor that not only relates to humans, as numerous animals also depend on sound signals for their communication. Effects were z. B. observed in songbirds in urban areas.

In a study published in spring 2011, the World Health Organization (WHO) identified noise as the second largest environmental factor that increases the burden of disease (after air pollution). According to estimates by the European Environment Agency, around 20 percent of people in Europe are affected by a noise level that is harmful to health according to the WHO definition.

Frequent noise events, e.g. B. from aircraft noise , can endanger health. In 1910 Robert Koch prophesied : “One day man will have to fight noise just as relentlessly as cholera and the plague”. The point of attack of the noise is not only primarily the ear , but also secondarily the disturbance of the balance of stress hormones , in particular cortisol and other corticosteroids .

Noise pollution during sleep , such as night flight noise , is considered particularly critical. Nocturnal noise, even through high individual levels, can lead to health hazards in the long term. Maximum levels of 45 dB (A) and more can lead to wake-up reactions. According to consistent scientific studies, an increase of 10 dB is perceived as a doubling of the volume.

At a sound pressure level of 55 dB (A) or more , noises are increasingly perceived as a nuisance. If this persists over a longer period of time, performance and well-being are reduced. Noises of 65 to 75 dB (A) cause stress in the body . This can lead to arterial hypertension (high blood pressure), cardiovascular disease and myocardial infarction (heart attack). Noise can also reduce gastric secretion and cause gastric ulcers .

Further consequences of exposure to noise are:

The human hearing is endangered by continuous sound effects with A-weighted sound pressure levels above 85 dB. If noises of this strength affect a person over long periods of time, noise- related hearing loss can be expected. Occupational hearing impairments are currently the top priority of all occupational diseases in Germany.

At a sound pressure level above 110 dB (A), even a single noise event can damage the hearing (acute acoustic trauma ), especially if the pain threshold is exceeded. The damage depends on the time of exposure and the pitch.

The following noise levels have an impact on human behavior: 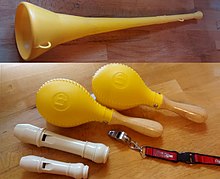 The most common application form of intentional noise use is noise instruments in the leisure sector . Many children enjoy just making noise with whistles , ratchets , recorder heads or the like. The Vuvuzela fanfares , which have also been known in Europe since the 2010 World Cup, are particularly popular in South Africa . 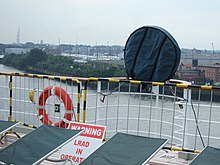 Sonic cannon on board the Queen Mary II

Noise can also be used deliberately against people. So-called sonic cannons can be used as non-fatal means z. B. can be used against piracy . The New York police also used LRAD (Long Range Acoustic Devices) during demonstrations. The attacker is exposed to unbearable noise by means of directed loudspeakers. This noise is characterized by a frequency spectrum that is particularly unpleasant for people and particularly high sound pressure.

In music, high volume is referred to as noise or noise if it is a reinvented or reorganized artistic expression (for example electrically amplified or distorted) initially as unmusical or unusual and even (politically) disturbing and the "noise" (for example in Jimi Hendrix ) is perceived as a revolutionary gesture.

In order to protect against noise , through avoidance or control, various noise abatement measures are used.

On the part of the state there are a number of legal regulations. The Federal Immission Control Act applies in Germany . The Environmental Noise Directive was issued at European level .

The Day Against Noise is the German version of the international Noise Awareness Day (English, German: day to pay attention to noise or day of noise awareness ). In Germany , the Day Against Noise is organized by the German Society for Acoustics and is linked to various campaigns aimed at addressing as many age groups as possible. Over the years there has been a painting competition for children, a virtual audio tour (video or CD) and city tours on the subject. It takes place annually in April. Everyone who is concerned with noise protection, protection of silence, good hearing and listening can participate with regional or supraregional activities.

In 2012, the Federal Environment Agency complained that " noise awareness ", unlike other negative environmental influences, is hardly socially pronounced. Hardly anyone forego activities “to avoid noise”.