The cause of the ulcer is a disproportion between aggressive factors and the protective mechanisms of the stomach . 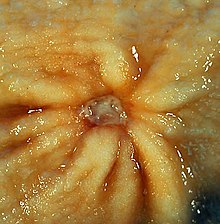 Benign gastric ulcer of the antrum

It was first described in 1586 by Marcello Donati .

In general, an ulcer is caused by a disproportion between factors that protect the gastric mucosa and factors that damage the mucous membrane. Damaging factors are excess stomach acid and chronic inflammation. Protective factors are sufficient blood circulation and the formation of an acid-proof mucous layer.

The most common cause is an inflammation of the stomach lining ( gastritis ).

Franz Alexander described gastric ulcer around 1950 in the 7 Diseases ( Holy Seven ) as a psychosomatic disease.

Other causes include prolonged use of certain drugs or other substances that reduce the formation of the protective mucous layer in the stomach:

A genetic disposition and an increased incidence in people with AB0 blood group 0 have been proven .

A colonization by the bacterium Helicobacter pylori is found in three quarters of patients with a gastric ulcer . In the case of duodenal ulcer it is even 99%. Around 50% of the healthy population is colonized. The germ is able to multiply in the acidic environment of the stomach and cause chronic inflammation. It was not until 1982 that John Robin Warren and Barry Marshall discovered or identified this bacterium, for which they received the Nobel Prize in Medicine in 2005 .

The chronic gastric ulcer is usually located on the borders of the antrum to the pylorus and body , which are also the main locations of Helicobacter pylori gastritis.

With the naked eye, the gastric ulcer shows up as a round defect with a flat edge. Long-standing ulcers often have a rim raised by scar tissue. After the ulcer has healed, a red scar with many vessels remains. This is then converted into a connective tissue, white scar. Cell debris and fibrinoid necrosis appear in the tissue . In the early healing phase there is a characteristic four-layer structure. Granulocyte- rich eschar and fibrinoid necrosis are found in the base of the ulcer. In the direction of healthy tissue, granulation tissue and scar tissue rich in capillaries appear . As the healing process progresses, a single row of regenerated epithelium grows from the ulcer edge. It can take years to restore the stomach's original glandular architecture to the site of the ulcer. A local re-differentiation of the epithelium as gut-like metaplasia is common. Likewise, the submucosa is not completely rebuilt during ulcer healing. As a result, the muscle layers of the stomach wall and gastric surface tissue fuse. This can lead to movement disorders of the stomach.

Stomach and duodenal ulcers cause sharp abdominal pain in the epigastrium . The gastric ulcer often shows constant pain or increased pain after ingestion. Duodenal ulcer pain is often relieved with food. There may also be nausea or nausea. The ulcers can, however, be completely symptom-free; especially if ingested (fatal NSAIDs) painkillers reduce the pain sensation. Around a third of patients only become symptomatic after complications from the ulcer.

In 1910, the Austrian radiologist Martin Haudek (1880–1931) showed how a wall defect in a gastric ulcer appeared in the X-ray ( Haudek niche ). However, a reliable diagnosis can only be made by means of a gastroscopy with the removal of tissue samples . The tissue samples are used to rule out gastric cancer , which cannot be distinguished from a gastric ulcer with the naked eye. Helicobacter can also be seen under the microscope . A gastroscopy also includes the duodenum so that ulcers there can also be diagnosed. Tissue samples are not necessary for duodenal ulcers. Any bleeding can also be stopped as part of the examination.

If a gastroscopy is refused, Helicobacter can be detected in the stool using a breath test , antibody test or antigen test . It is then not possible to rule out cancer. The breath test is sufficiently safe. The antibody test is not recommended for making therapeutic decisions. In the case of a duodenal ulcer, a breath test replaces tissue removal.

In the case of an ulcer without Helicobacter colonization and without NSAID intake, a determination of gastrin should be considered to rule out Zollinger-Ellison syndrome and to exclude hyperparathyroidism by determining calcium and parathyroid hormone .

The success of the therapy should be checked again around four to six weeks after the initial diagnosis by means of a gastroscopy with tissue removal in order to reliably rule out cancer.

A third of patients with ulcers only become noticeable through complications. Around a fifth of all ulcer patients develop acute or chronic bleeding from the ulcer. The bleeding may lead to tarry stools , vomiting blood, or vomiting like coffee grounds. Acute ulcer bleeding can quickly reach life-threatening proportions and requires an immediate gastroscopy to stop the bleeding. The ulcer can also cause the stomach wall to break through into the abdominal cavity. Sudden abdominal pain or a sudden decrease in ulcer pain can be indicative. Evidence is provided by an X-ray while standing, which makes the air that has penetrated the abdomen visible. In the case of a perforation , an immediate operation is indicated, otherwise life-threatening peritonitis threatens. Late complications are a narrowing or widening of the stomach outlet. The narrowing shows indigestion, weight loss and vomiting. The expansion allows bile and pancreatic secretions to enter the stomach. This can lead to chronic inflammation of the stomach. In 5% of cases, a chronic gastric ulcer can turn into gastric carcinoma .

An ulcer is generally treated with an acid inhibitor , such as a proton pump inhibitor ("PPI"). General measures such as stress reduction and abstinence from alcohol and nicotine are also indicated. It is also important to consider whether drugs that cause ulcers can be discontinued.

If Helicobacter pylori has been detected in a stomach or duodenal ulcer , this germ is killed ( eradication ). To treat the Helicobacter pylori infection, a combination of different antibiotics and a proton pump inhibitor (PPI) are administered over a week.

The medication should be taken before a meal.

If eradication therapy fails, amoxicillin can be retained as Helicobacter does not develop any resistance to the antibiotic. As a second antibiotic, fluoroquinolones such as levofloxacin or moxifloxacin or rifabutin come into consideration. The bismuth salts added in other countries in the event of therapy failure are not permitted in Germany. If eradication therapy has failed twice, the bacterium should be cultivated for resistance testing.

The success of the therapy should be checked at the earliest four weeks after discontinuation of the therapy, as the administration of PPIs inhibits bacterial growth and can lead to false negative results.

Surgical treatment is only necessary for complications that cannot be controlled by a gastroscopy. This includes bleeding that cannot be stopped in the gastroscopy, a breakthrough into the abdominal cavity and a narrowing of the gastric outlet. If the bleeding is severe, it is usually sufficient to pierce the ulcer with the ligature of the vessel concerned. In the case of a perforation, the ulcer is cut out and the remaining stomach wall sutured.

When administering drugs that increase the risk of an ulcer, simultaneous, preventive long-term therapy with a gastric acid inhibitor ( PPI ) is recommended. This is especially true of the combination of NSAIDs and anticoagulant drugs to prevent bleeding from an ulcer. Ulcer prophylaxis with PPI should also be carried out in intensive care patients. Reducing stress and quitting smoking also lower the risk of an ulcer.

General testing of the population for Helicobacter pylori is not recommended. The eradication is usually successful. Only in rare exceptions does this fail. Once the germ has been wiped out, reinfection occurs in one out of a hundred cases. This does not have to lead to an ulcer.

The stomach ulcer in the horse is the most common gastrointestinal disease in equines. In pig production, a gastric ulcer develops in 5 to 30% of pigs, depending on the study and housing system. At the time of slaughter, other animals are already infected with a preliminary stage of the disease. The main reason for the pigs is too fine a grind in the feed, as this attacks the gastric mucosa more severely.