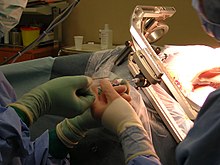 Brain biopsy with the help of stereotaxic

Biopsy ( Greek βιοψία biopsía from Greek βίος bíos " life " and ὄψις ópsis " seeing ") is a surgical procedure to remove and examine a small amount of tissue from a living organism . The removed tissue (the biopsy or biopsy) is examined by the pathologist under a microscope . In addition, chemical analyzes are also part of the examination methods.

The findings from a biopsy allow statements to be made about pathological changes in the fine tissue structure (histopathology) of the examined tissue. In particular, the question of whether tumors are malignant or benign can often be clarified by a biopsy. 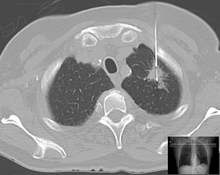 There are different forms of tissue or sample collection. Most biopsies are performed with special cannulas. Depending on the instrument used, one speaks of:

The word combination of “biopsy” and the organ to be examined is also common (for example liver biopsy , muscle biopsy , lung biopsy , kidney biopsy , brain biopsy ).

Usually a small skin incision is made first, especially in the case of wide-lumen biopsy needles. Depending on the organ, biopsies can be performed without visual inspection (“blind”) or in combination with imaging procedures .

One speaks (engl. Incisional biopsy of an incisional biopsy), when only a small part of the tissue to be examined in more detail - z. B. a tumor - is removed, and from an excisional biopsy , if the entire focus is removed when the sample is taken. The excisional biopsy is usually done surgically, i. H. through an incision. This should only be done with small lesions. In general, with every biopsy there is a risk of tumor cells being carried over, but for most tumors there is no therapy without diagnosis. The immediate removal of the - possibly - malignant change in the tissue in the sense of the excisional biopsy, as it would be obvious, is often not possible, since it is not clear how large the safety distances to be observed are. Many tumors also require pre-treatment ( neoadjuvant therapy ) before they are definitively removed . In general, however, with open biopsies (incisional biopsy) it is necessary to remove the access route during the later operation in order not to leave any tumor cells behind. Therefore, a biopsy, in particular, which is carried out if a sarcoma is suspected , should be carried out where the final treatment is planned later.

With the liquid biopsy ( German  liquid biopsy ) the sampling and analysis of non-solid biological tissue , mainly blood, takes place . One advantage is that it is largely non-invasive . Like the traditional biopsy, this type of examination is mainly used to diagnose and monitor diseases such as cancer . The method was made possible by advances in DNA sequencing of the human genome , which can detect genetic mutations in cancer.

Bleeding or bruising may occur as a result of a biopsy. A wound infection or an injury to the neighboring tissue is also possible.